Designer and contractor Chip Wade is the host of the show “Elbow Room,” and he doesn’t just DIY for HGTV.

When he and his wife Pauli bought their house in Atlanta a few years ago, it had been foreclosed on before construction was finished. With only the framing finished, he went to work on the rest of it himself.

HGTV Magazine reports he did everything “from cutting beams for the 20-foot ceilings to designing light fixtures.” His house is featured in their September 2015 issue. Take a look!

Chip has a degree in mechanical engineering and is certified in residential construction.

He first appeared on HGTV in 2007 as a carpenter for “Designed to Sell.”

Since then he’s appeared on “Curb Appeal: The Block,” “HGTV’s Showdown,” “Design Star,” and has been the host of “Elbow Room” since 2012.

The family room has 20-foot-high ceilings with tall windows overlooking their 2.5 wooded acres. He says, “It feels like we’re in the middle of nowhere even though it’s just a short drive to any store.”

There’s another hidden door on the other side of the range that leads to a pantry.

The island is 12 feet long with a terrazzo countertop. “It’s our entertaining epicenter,” he says.

He created a secret playroom for the kids off the kitchen:

A Dutch door acts like a safety gate for the little ones:

Chip tells the mag, “We’ve shot scenes for HGTV here, plus I’m always having friends over so I can help them build things.” His son Mac “likes to draw up plans for submarines and stuff, and then we make them together.”

I still remember when Chip was part of the carpentry team on “Designed to Sell.” I miss that show! A reader spilled all the deets on what it was like to have her house featured on it that you can read here.

(photos by David A. Land; styling by Courtney De Wet).

More info about Wade on his website and about his show “Elbow Room” at HGTV.com. 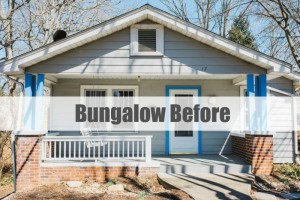 Previous Post
A Bungalow Makeover in Asheville: HGTV’s Urban Oasis 2015
Next Post
How Brooke Shields Decorated Her House in the Hamptons