I thought it would be fun to take a look at all three and see which one you like best.

He’s selling two of his properties on the water in the Hamptons. This house was built in 1946 and is probably the more modest of the two (and less expensive), but it has its charms, including cedar vaulted ceilings.

The listing says, “Privately located on Aspatuck Creek in the bucolic hamlet of Quiogue (minutes from downtown Westhampton Beach), this 2.4 acre waterfront property has been completely renovated with decorative touches by a world-famous designer.” Any guesses who the designer might be?

There’s an apartment over the garage with an additional bedroom and full bath, as well as a pool house with full bath and sitting room “or spare sleeping quarters in a pinch.”

For photos and information, check the listing.

English-Country Style Cottage in the Hamptons

Not far from the other property that Cooper is selling is this “Charming English-Country Style Waterfront Cottage.”

The listing says, “Built in 1928 as a sports club for a nearby estate, the 2.3 acre property was completely renovated and features decorating touches by a world-famous designer.”

It’s on the market for $3.199 million. For photos and information, check the listing.

According to the Daily Mail, he plunked down “between $5 million and $9 million” for this historic 1908 mansion designed by architect Wilson Eyre. But the listing says it was a short sale and sold for $1.95 million. If that’s true, then he got a heck of a deal.

This house looks more like what I’d expect the son of Gloria Vanderbilt to live in, although he doesn’t have a trust fund to go with it. He says his mom wanted him to stay motivated and find his own way. I’m telling my kids the same thing. 😉

The listing says, “Stunning stone and stucco English Country manor house overlooking the majestic Litchfield Hills. Drive through the iron gates and view the house from the long approach through the allee of mature trees. The stone walls meet you half way and carry you under the porte cochere and onto the cobblestone-lined courtyard.”

The main house has 6 bedrooms and 6 baths. There are servants’ quarters with 4 more bedrooms.

I’d love to see what he does with this place. Maybe he’ll bring in that “famous designer” who worked on the two houses in the Hamptons to update it.

Rye House, which is listed on the National Register of Historic Places, comes with an Olympic-sized swimming pool, tennis court and green house.

It sits on nearly 50 acres in Bantam, CT. For photos and information, check the listing.

The Connecticut and Hamptons properties couldn’t be much more different, could they? Would you rather spend your imaginary millions on the manor in Connecticut or to scoop up a waterfront cottage (or two) in the Hamptons? 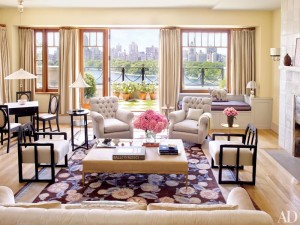 Next Post
Richard Gere Selling His Serene Retreat in the Hamptons