One of my favorite movie houses is the romantic white Victorian built for the 1998 movie Practical Magic. It cast such a spell over audiences that it’s hard to believe it’s not real.

The filmmakers were unable to find exactly the house they wanted in the type of location they envisioned, so they built this elaborate exterior instead. It was empty inside and torn down after filming ended.

Director Griffin Dunne hired Robin Standefer and Stephen Alesch of Roman and Williams to design a house that looked like it could be home for generations of witches. After the movie came out, we all flipped for it and wanted to know where the house was.

They say they even got a call from Barbra Streisand, who wanted to buy it. They had to break the news that it had just been an “architectural shell,” with nothing inside, telling her, “It was fictional. And unfortunately, it’s been torn down.”

She’s not the only one who was disappointed to hear that! We’ll always have the movie, though, and these photos of it to revisit. Let’s take a look back at the now-iconic sets they built for it.

Note: This post contains affiliate links that may earn commission. 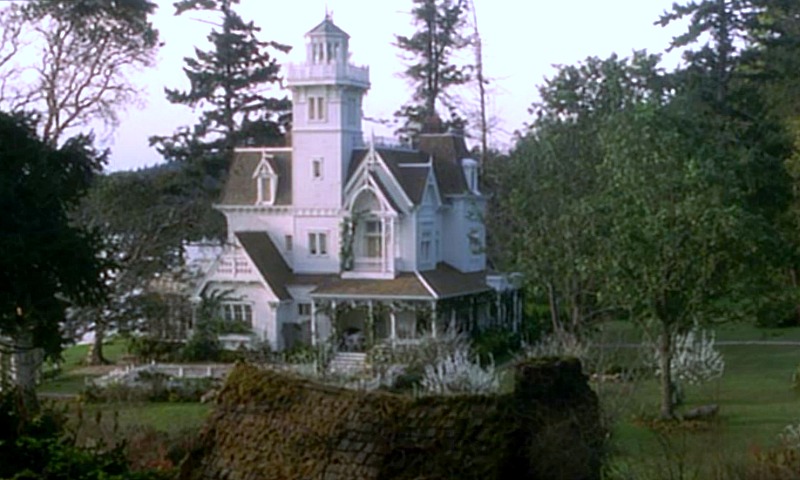 Standefer and Alesch were inspired by Victorian houses with 19th-century scrollwork and East Coast lighthouses. 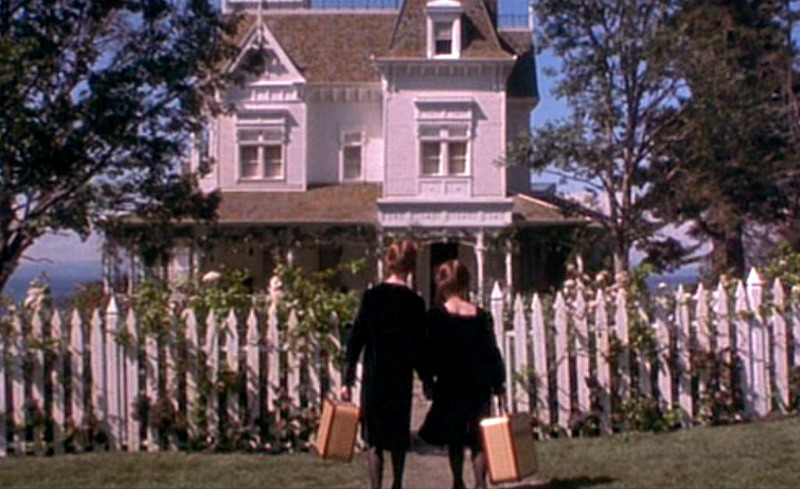 Fran and Jet on the Front Porch:

The story takes place in New England, but the house was built on Washington’s San Juan Island (Friday Harbor). 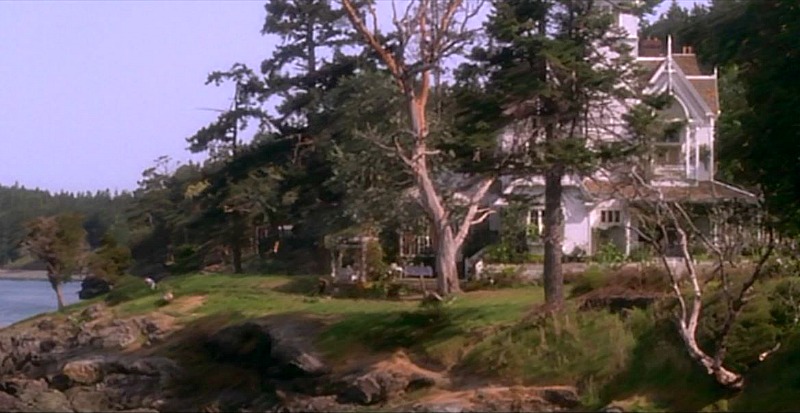 A photo taken during construction of the house: 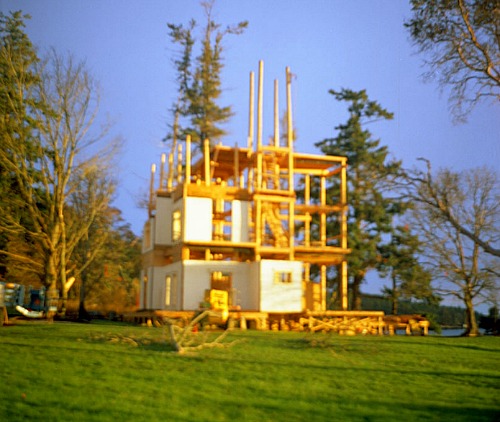 It took them 6 months to build the standing set, which was a hollow shell.

A side porch overlooks the garden and the water:

The movie was based on a bestselling novel by Alice Hoffman (Amazon affiliate link): 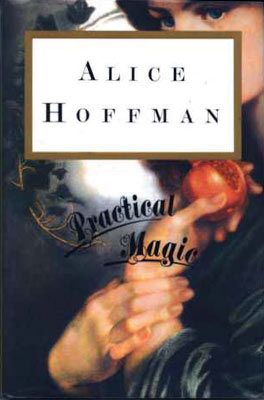 There are differences in the book. For one thing, the girls don’t live with their aunts like they do in the movie.

The Entry Hall and Staircase 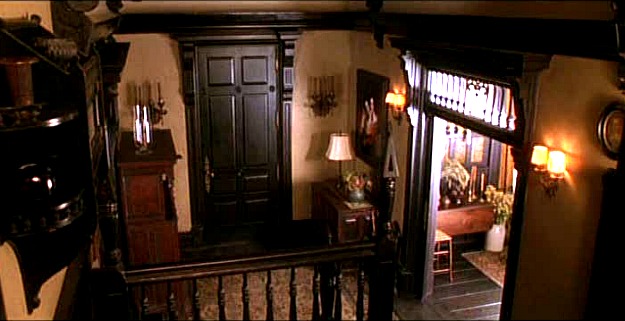 The interior sets were all created in a studio in Los Angeles. 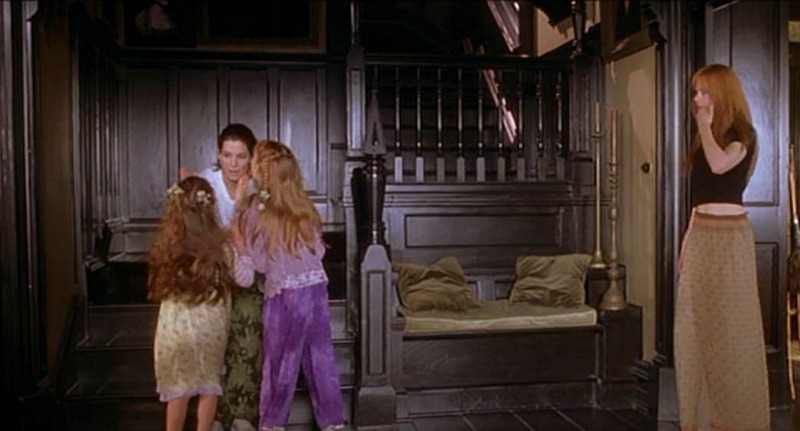 The props department was tasked with filling hundreds of bottles to put inside these glass-fronted cabinets. 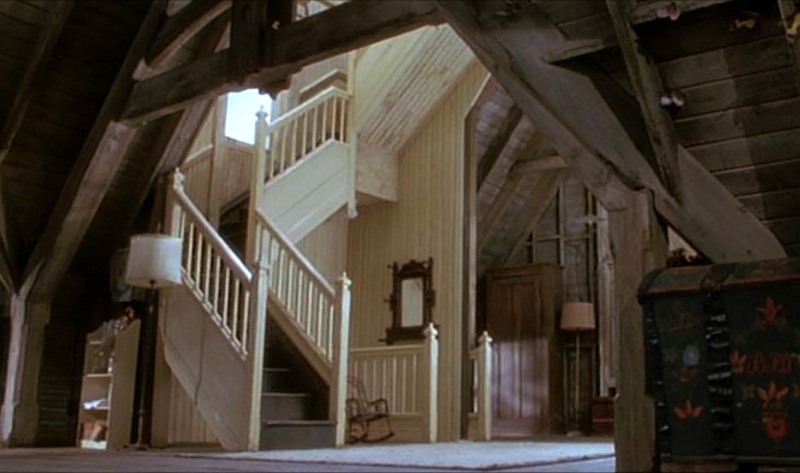 Both actresses have starred in other movies with great houses, too, from The Proposal to Bewitched.

The stairs go up from the attic to the lighthouse-like tower. 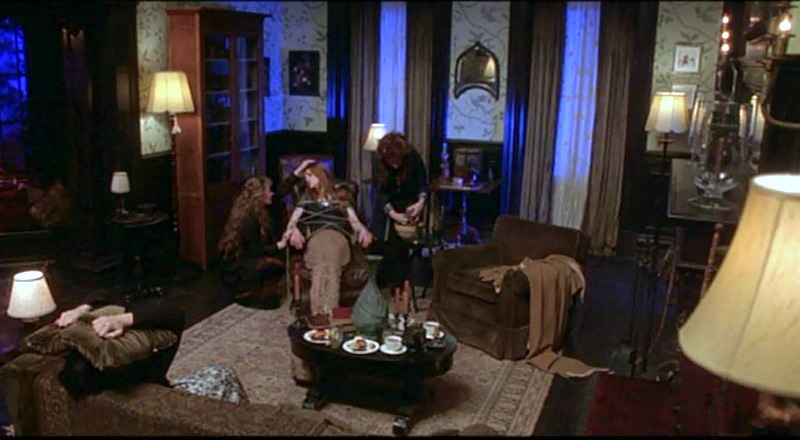 They planned an exorcism of sorts in the parlor. 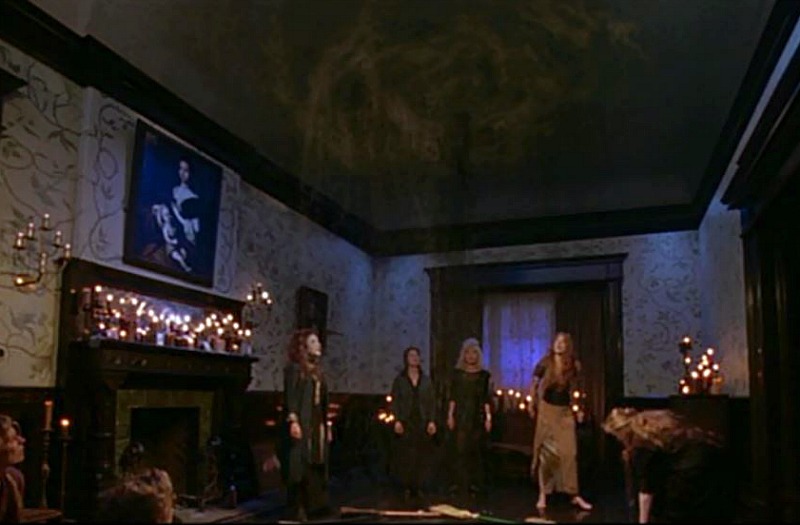 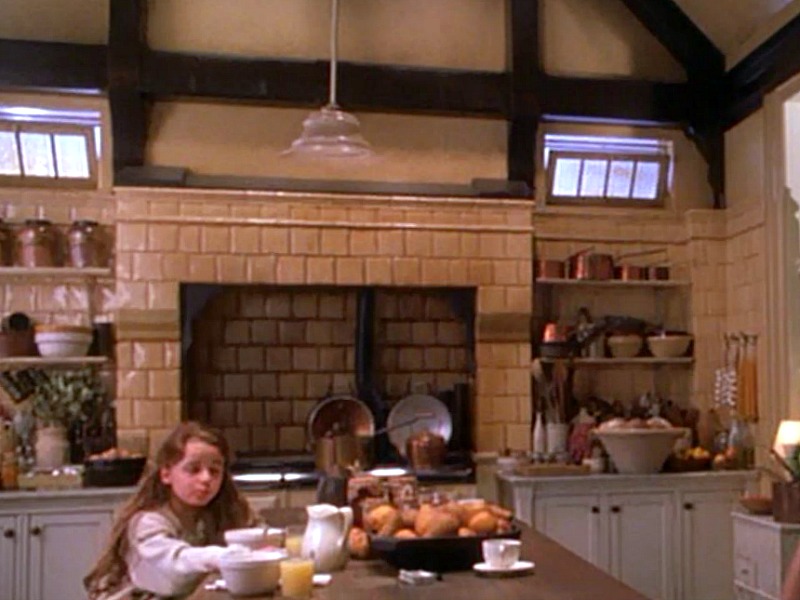 “The Aga is almost like a shrine,” production designer Robin Standefer said of the range in the kitchen.

“This is the place where they do their work; it’s where they place the cauldron.”

The whole house was pretty fabulous, but the kitchen may be the most memorable.

The author of the novel Alice Hoffman said:

“When I visited the stage set for Practical Magic in Los Angeles, I realized that the set designers had created a complete physical world out of their imagination, just as I had. It was as if we were both novelists.”

A reader designed this kitchen (below) inspired by the one in Practical Magic: 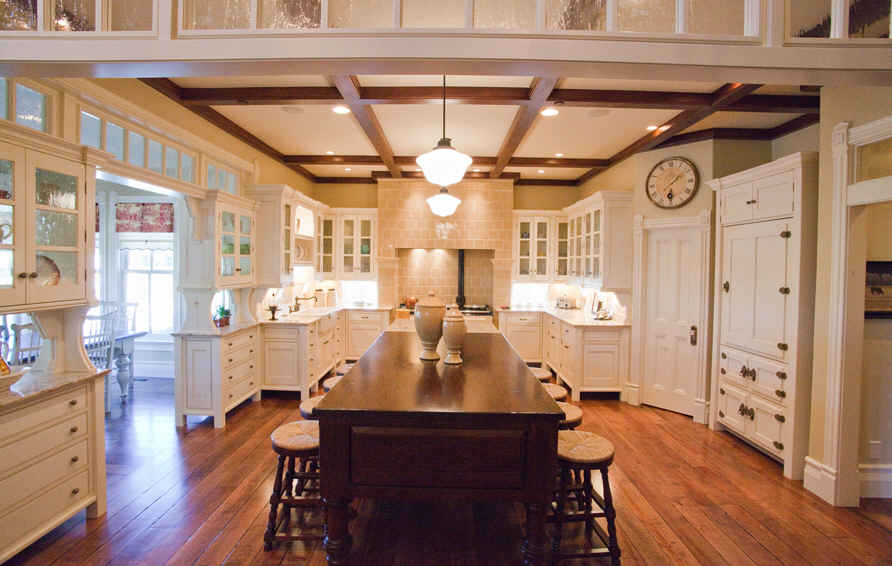 Margarita Night in the Kitchen:

Alesch and Standefer decorated the sets with treasures they found through architectural salvage. 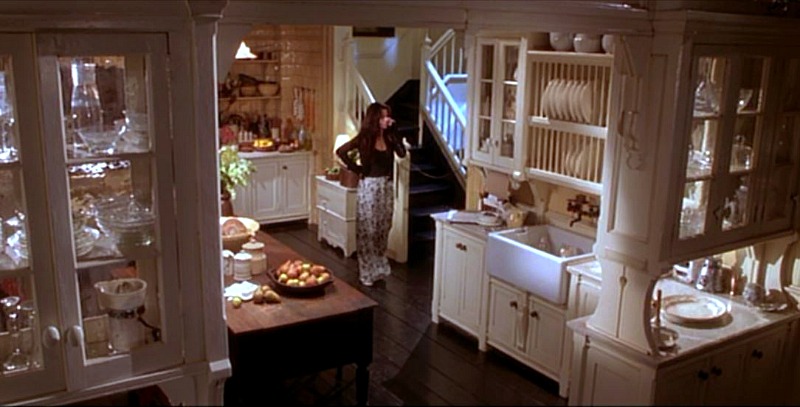 Double Doors Lead from the Kitchen to the Greenhouse:

“The house itself has a certain magic to it,” Standefer says.

“There is a whole world in this house and garden.

These women are outcasts and this place is their sanctuary.” 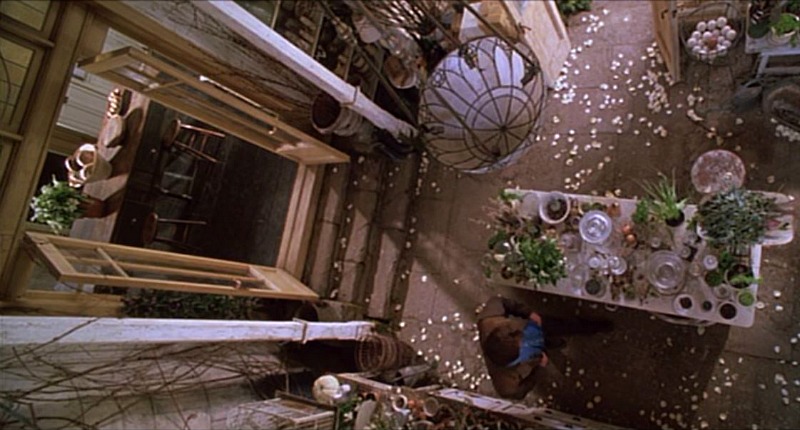 Director Griffin Dunne says he was enchanted by the script when he read it:

“It was literally like a cauldron. Every emotion, theme and ingredient you could imagine was swirling around in it. I particularly liked the women’s use of magic; it comes right from the title. It’s about a more practical, almost holistic approach that seems like a gift that virtually anyone could have.” 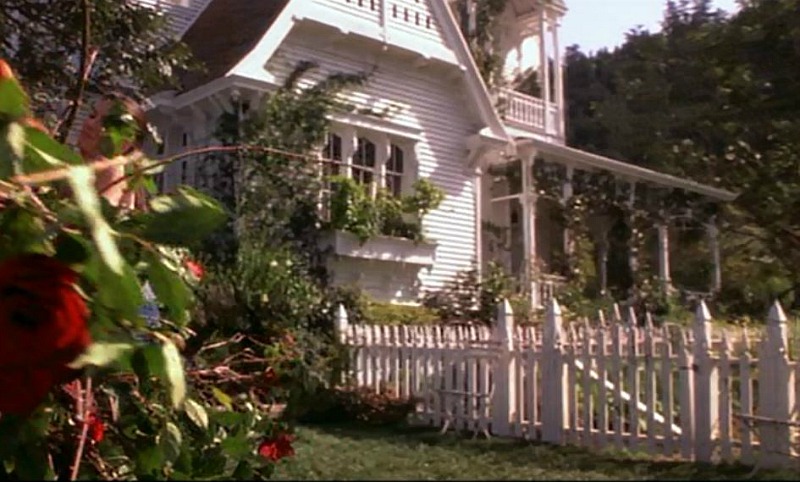 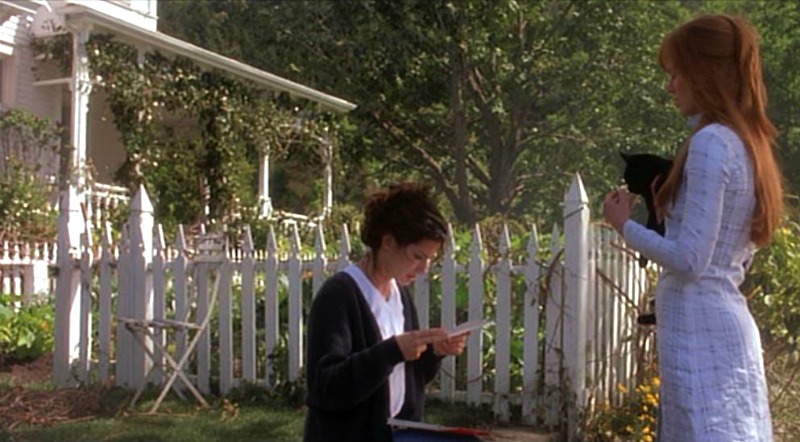 Many of the flowers and plants around the house were artificial. 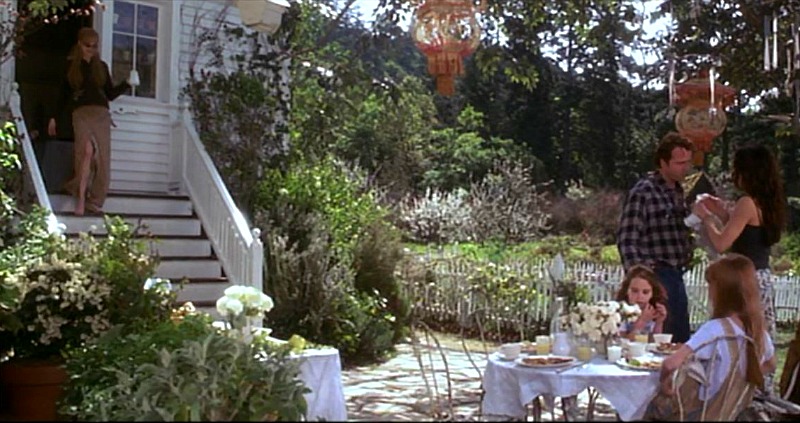 A Pergola Overlooking the Water: 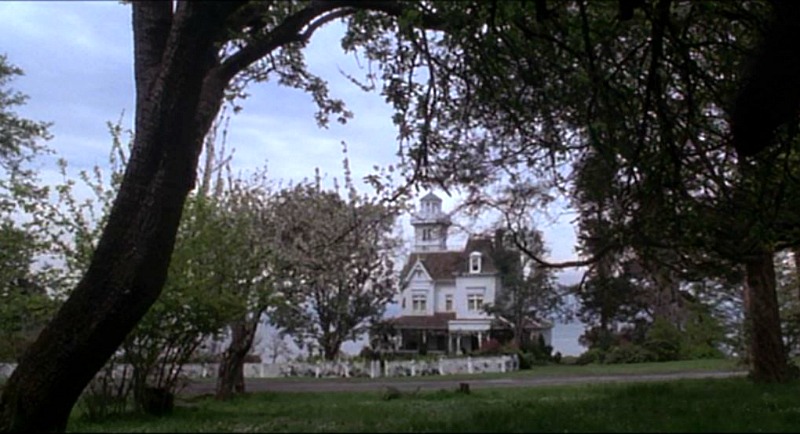 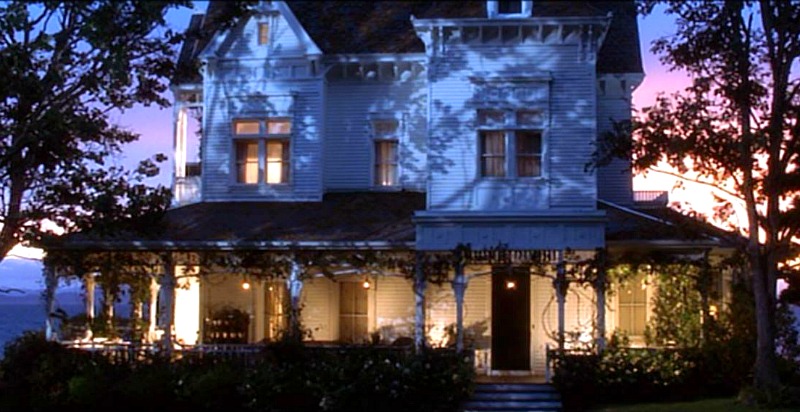 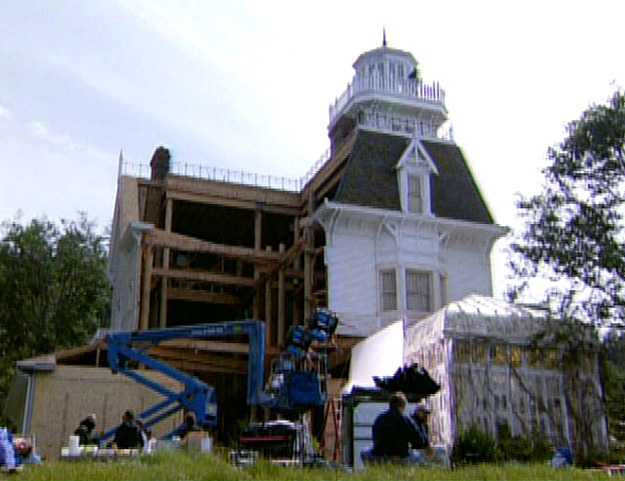 A reader sent me this photo that shows it was empty inside.

He told me the house was built on an old burial ground, so they weren’t allowed to dig there.

The entire structure was built on a giant platform so the earth wouldn’t be disturbed.

The town they used for Sally’s shop was Coupeville on Whidbey Island in Washington,

where they painted many of the storefronts white for filming. 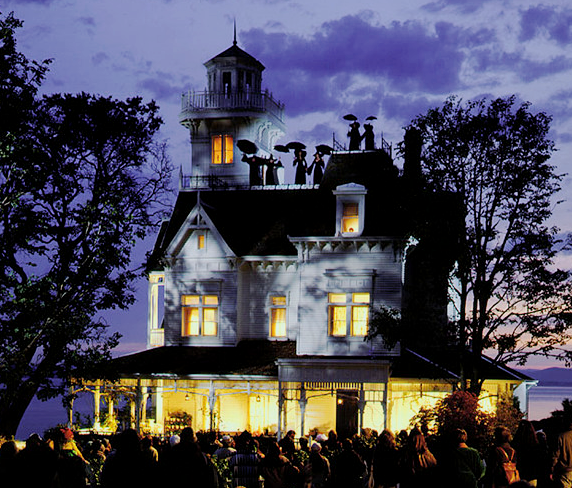 Is this one of your favorite movie houses, too? It’s definitely one of the most memorable!

A few of these photos appeared in a 1998 issue of Victoria Magazine. The rest are screenshots I took while watching the DVD with Special Features (affiliate link).

Visit my TV & Movie Houses page to see the others I’ve featured,

including Halliwell Manor from “Charmed.”

Previous Post
The “Money Pit” Movie Mansion Is For Sale in New York
Next Post
The “While You Were Sleeping” House in La Grange, Illinois