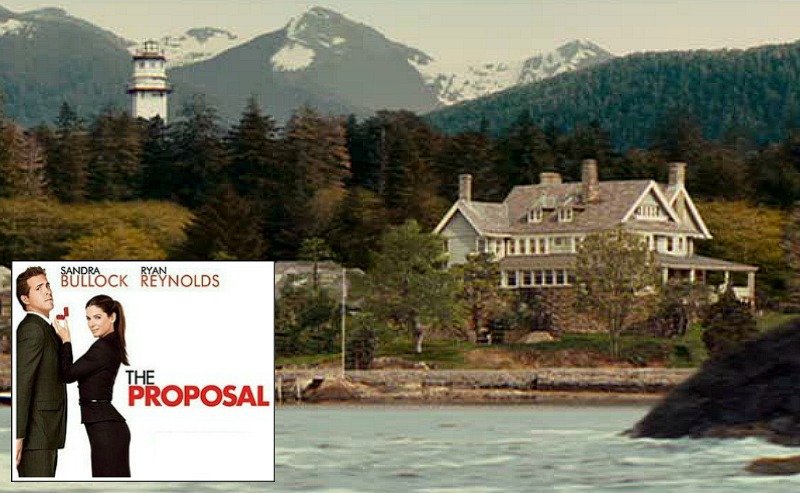 The Sandra Bullock-Ryan Reynolds movie The Proposal featured a fabulous cedar shingle and stone house in (what was supposed to be) Sitka, Alaska, but the real thing is actually located in Manchester, Massachusetts.

Let’s take a look at the 9-bedroom, 10-bath house where most of the rom-com takes place.

The House from “The Proposal” Movie 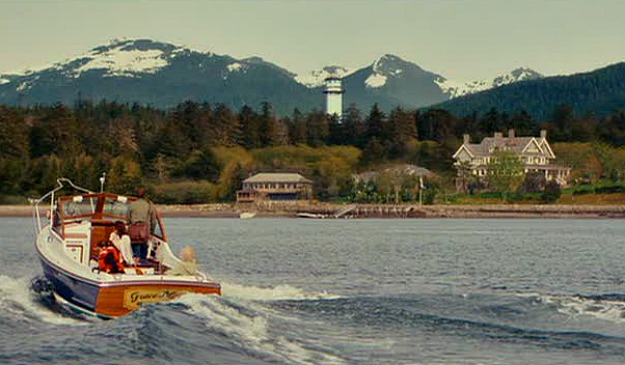 There were actually “other houses and brown, dead trees” surrounding the house.

The mountains, lighthouse, and many of the trees were added to make things look more scenic.

Fake branches with leaves were literally twist-tied to the trees around the house.

Production Designer Nelson Coates says they wanted a house with a rustic feel:

He took photos of the house, then added mountains, leaves, totem poles and stone with Photoshop before sending the photos to the execs at Disney. “They’re going, ‘Oh, my God, we had no idea they had mountains like that in Massachusetts.’ It was hilarious.”

You can see the front of the house, which isn’t shown in the movie, on Bing Maps.

Most of the scenes were shot inside the house, although some rooms were rebuilt on a soundstage for re-shoots. 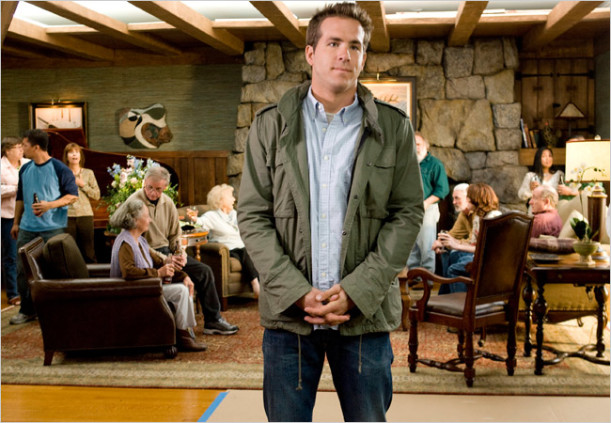 The real house is much more traditional in style. They thought it looked “too Colonial,” so Production Designer Nelson Coates built a facade on all of the interior walls of the house to make it looks more Alaskan. 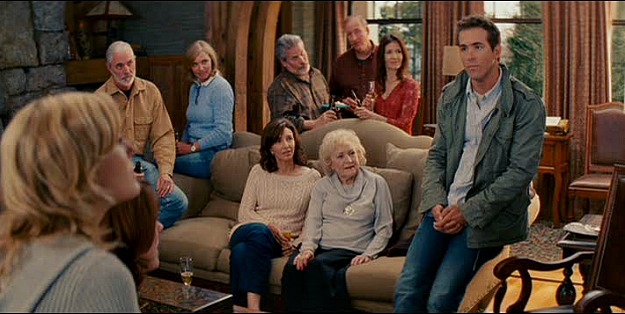 In the behind-the-scenes feature on the DVD we see the movie lights overhead (Amazon affiliate link): 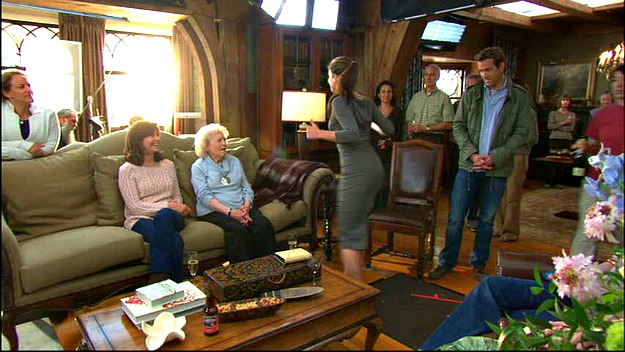 The fireplace stone, wood trim and beams are fake, as are all the walls in some rooms!

We only see the kitchen in a deleted scene via the DVD’s special features (affiliate link).

The Staircase in the Entry Hall:

The house has 3 stories, but the top 2 were off-limits to the film crew.

All of the homeowners’ things were moved upstairs, and they stayed in the guest house during filming.

You can read about the Kanebs, the family that owns this house, in the NYT.

The barn really exists on the property, so they decided to use it for Margaret and Andrew’s wedding.

They filmed an alternate ending that had Margaret’s plane turning around, and a happy ending on the tarmac.

They scrapped it and filmed a new ending in the Colden Books office where Margaret and Andrew worked.

They used an empty, gutted building in Boston for the earlier office scenes, but the entire set, including Margaret’s & Bob’s offices, had to be completely rebuilt and replicated at Disney Studios in Burbank, CA for the rewritten ending.

The town scenes were filmed in Rockport, Massachusetts:

Get the DVD with behind-the-scenes features at Amazon (affiliate link).

Read about how they transformed the town for the movie here.

See photos of what the house looked like originally at the New York Times.

Learn more about the house on Redfin.

Visit my Houses Onscreen page to see the other movies I’ve featured!