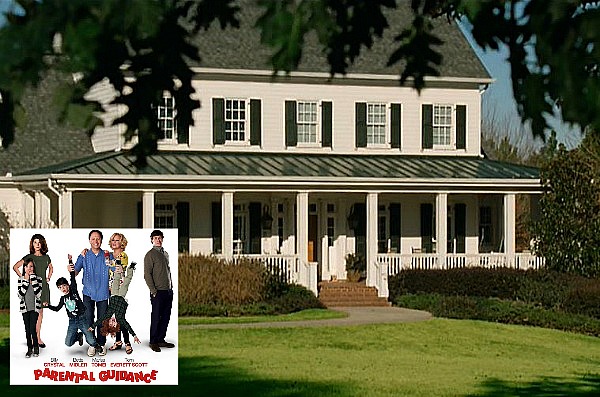 When I told my daughter Lily that I was getting a lot of requests to feature the house from the Billy Crystal comedy Parental Guidance, she said, “Oh, we watched that one at school! The movie’s kind of cheesy, but the house really is cool. You’ll like it, Mom.”

So I checked it out and she’s right — it’s a great house.

Billy Crystal came up with the idea for the movie after he and his wife babysat their own grandkids for a week.

Bette Midler was cast as his wife and Marisa Tomei plays his daughter who lives in Atlanta with her husband and three kids. 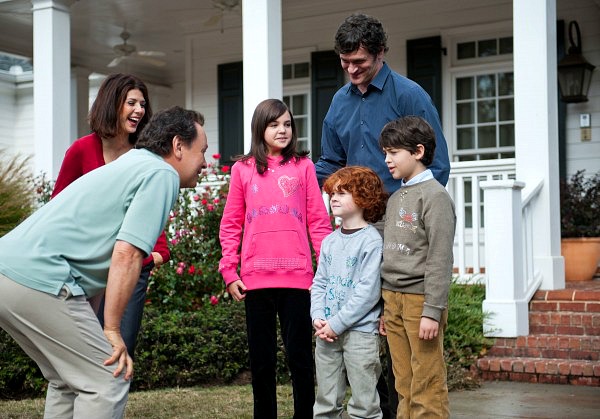 The movie was shot on location in Georgia.

Billy Crystal says “Tyler Perry was using all the available soundstages in the area, so we had to find a house where we could film most of it right there.”

This is the white clapboard house they found in Dunwoody, a northern suburb of Atlanta.

The family had to move out for a few months during filming. 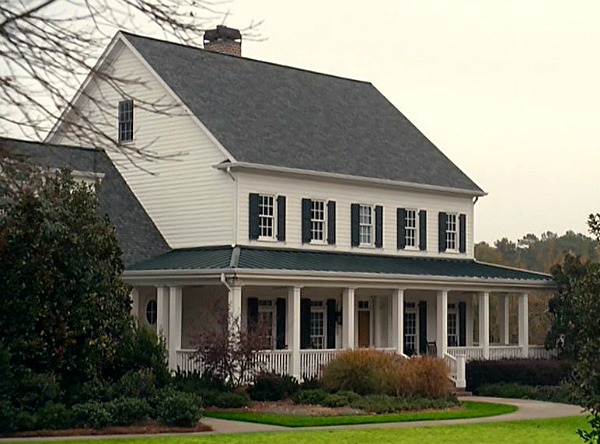 Director Andy Fickman says the grass was totally brown when they arrived to shoot the movie. The answer? “We painted it green!”

The other issue was that the house is nearly 6,000 square feet, but they didn’t want it to look like the family was living in a place that big (or expensive).

They tried to shoot it so it looked a little cozier than that. 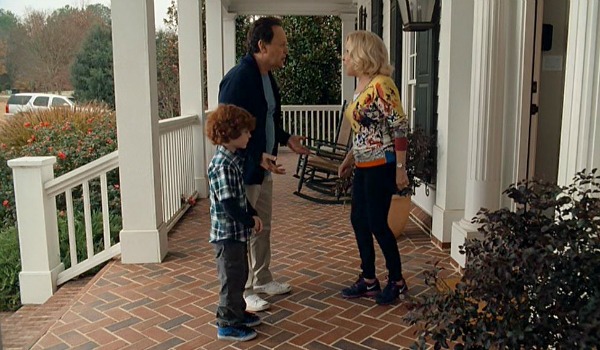 The house was built in 2003 and was inspired by the farmhouse architecture of a Southern Living house the family had toured nearby. 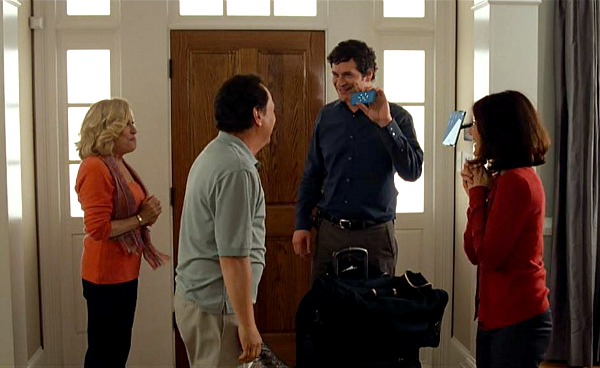 Alice’s husband Phil (Tom Everett Scott) has turned it into a “smart house” with his invention R Life.

The house does everything from raise the blinds and start the coffee in the morning to announcing when a family member walks in the door. 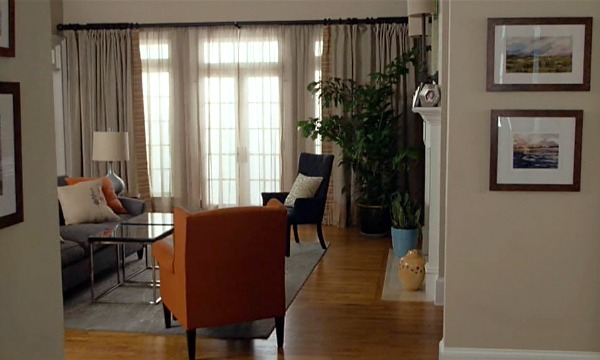 David Bomba was the production designer on the project.

He redecorated the house and made it look more modern. 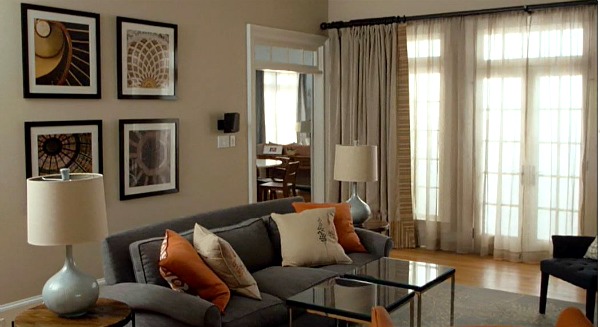 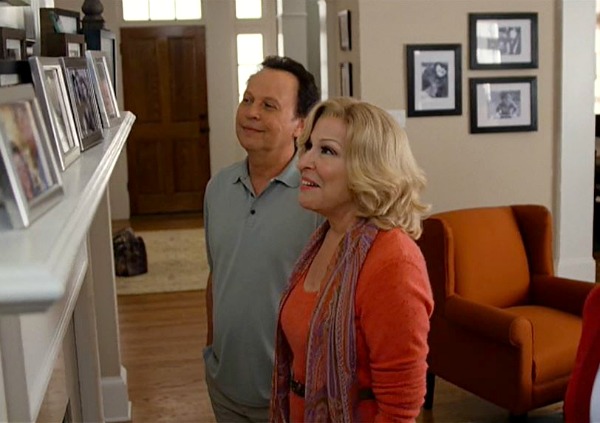 Artie and Diane can’t help but notice that most of the photos on the mantel are of the other grandparents. 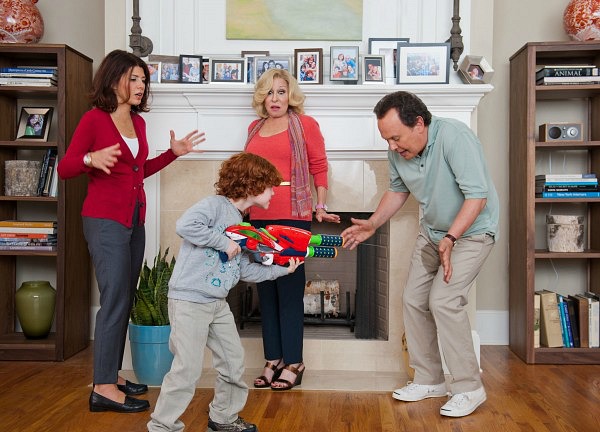 When Lily was describing the movie to me, she said the children do typical annoying-movie-kid things like spray their grandparents with water guns when they walk in the door and have a cake fight that trashes the kitchen. 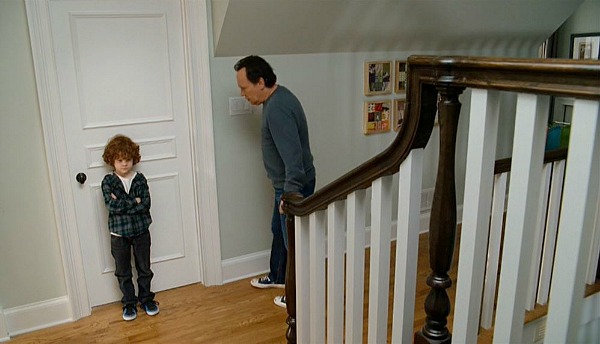 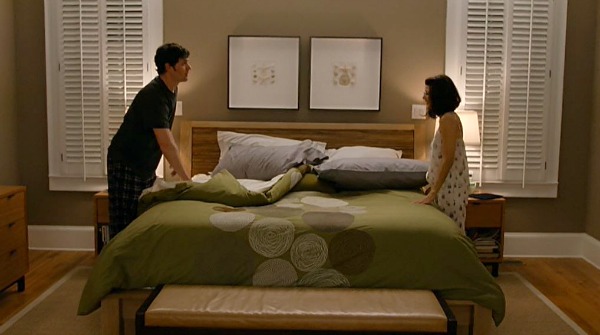 There are 5 bedrooms in the house and 3 of them had to be redecorated as rooms for the kids in the movie.

One of the rooms that wasn’t in the real house was the guest room that Artie and Diane stayed in. It was built on a soundstage.

Okay, my favorite part of the house: the back staircase and the kitchen: 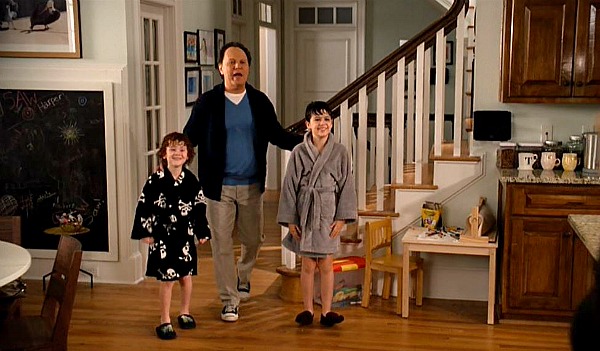 The kitchen opens to the family room: 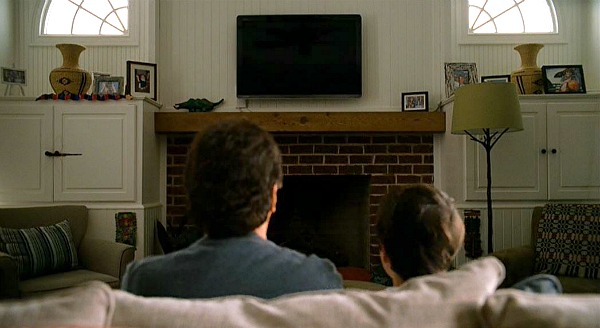 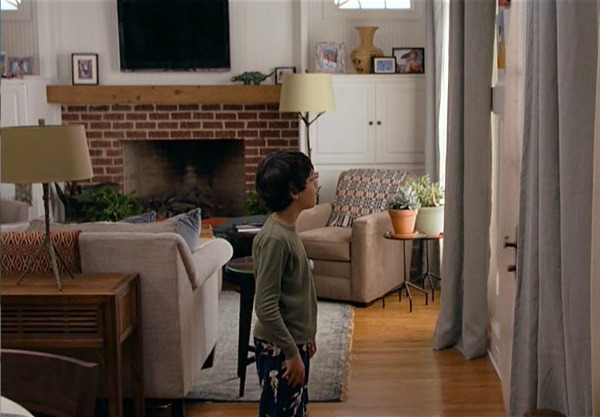 Remember that cake fight I mentioned?

The kids “went crazy” after Grandpa Artie gave them cake and stepped outside for a minute.

When he came back, the kitchen looked like this. 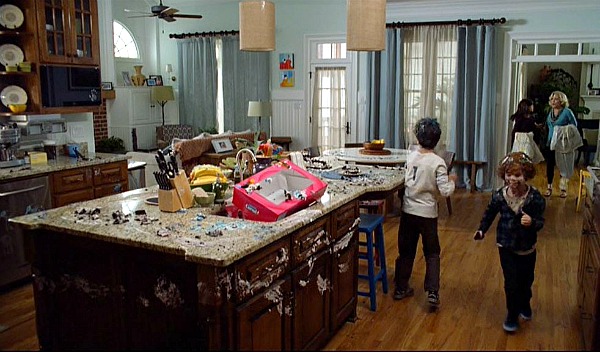 The director says they had no idea how badly the blue icing on that cake would stain everything and everyone it came in contact with, or how difficult it would be to clean.

This “smart screen” in the kitchen is one of the features of Phil’s R Life program. You can choose your music, tell the dishwasher to start, set the alarm, etc.

But when they were filming, it was just a blank green screen they were pretending to type on. 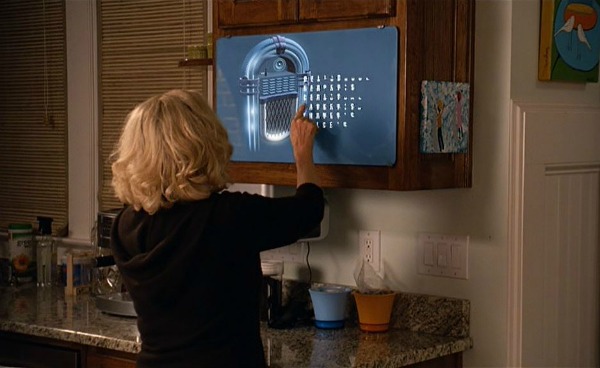 For the movie they painted the yellow walls white, changed the pendant lights, swapped out the barstools, and replaced the valance over the window to change the look of the room. 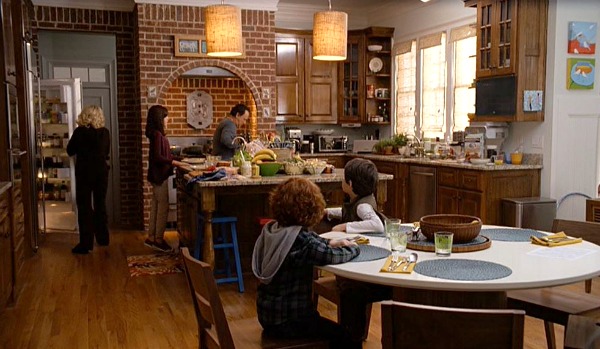 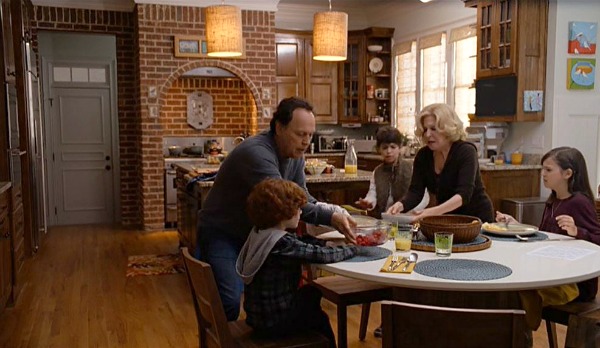 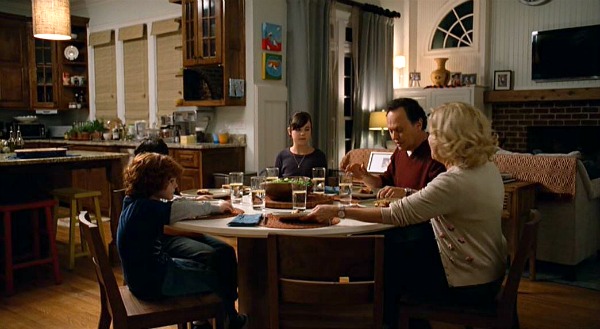 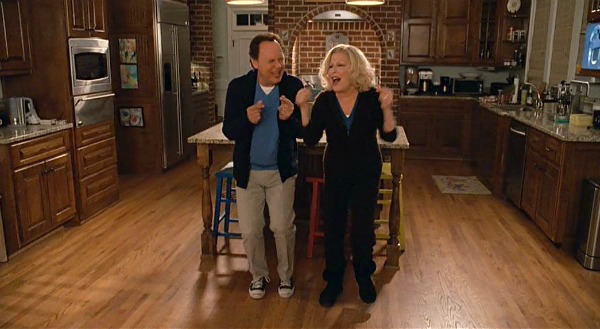 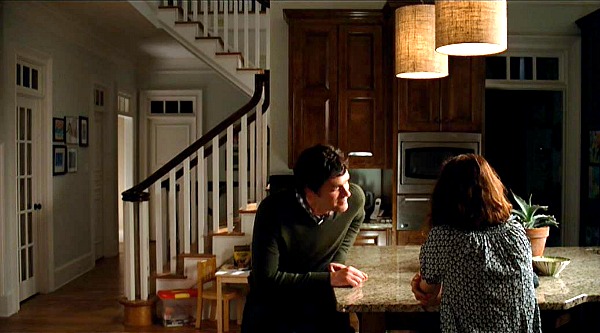 More scenes in the movie were supposed to take place on this screened porch, but they had so many rainy days during the shoot that most of them were moved to the kitchen: 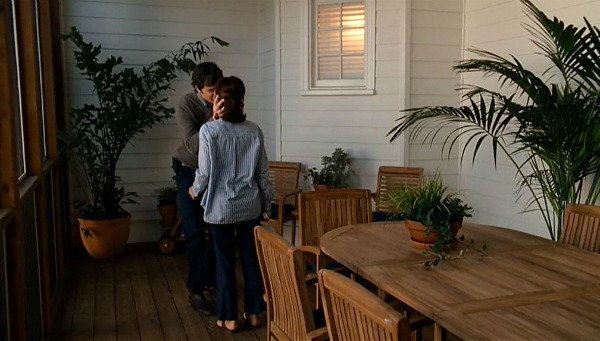 The back deck, where Artie teaches the kids how to play kick the can: 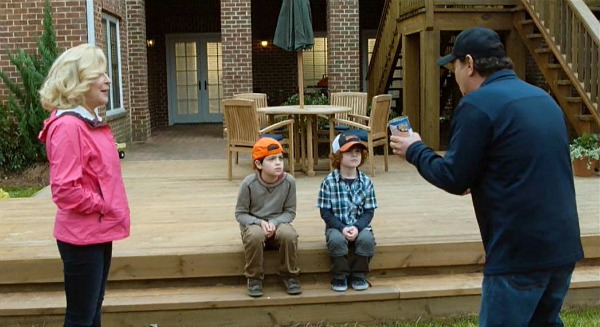 You can see the solar panels of this “eco-friendly” house in the backyard in this shot: 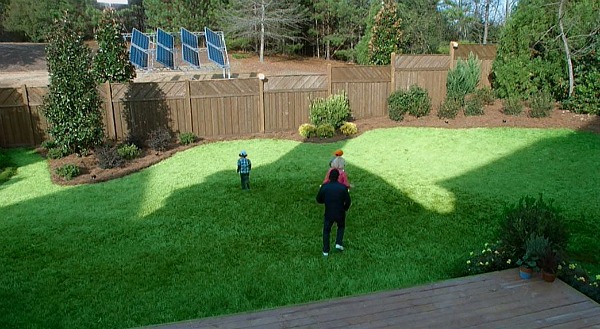 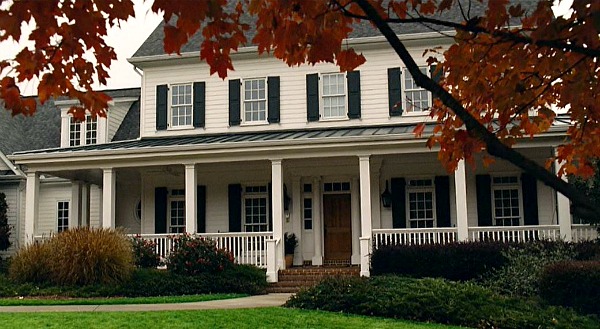 The house was part of the 40th Dunwoody Home Tour in the fall of 2012,

and you can see photos of it on the Dunwoody Crier website.

The ranch house where Artie and Diane lived (supposedly in Fresno) is nearby in Alpharetta. 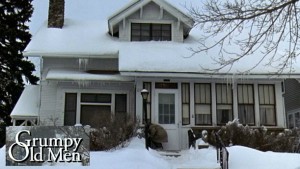 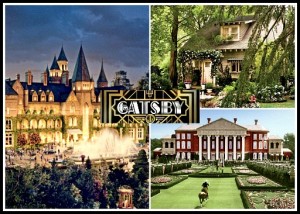 Next Post
The Beautiful Sets in Baz Luhrmann’s “Great Gatsby”