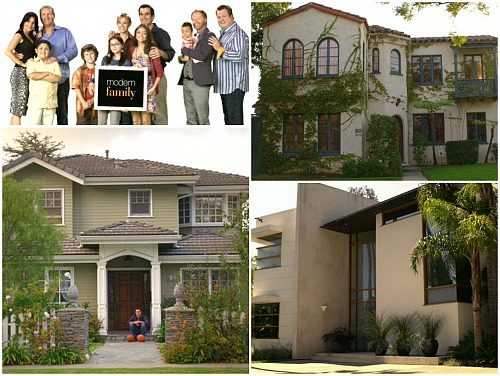 The Emmy award-winning sitcom Modern Family is about an unconventional extended family in California, filmed mockumentary-style.

Not only is it funny, must-see TV, but the houses of the three families that it follows are all fun to look at.

Let’s take a closer look at them, starting with Phil and Claire’s house. 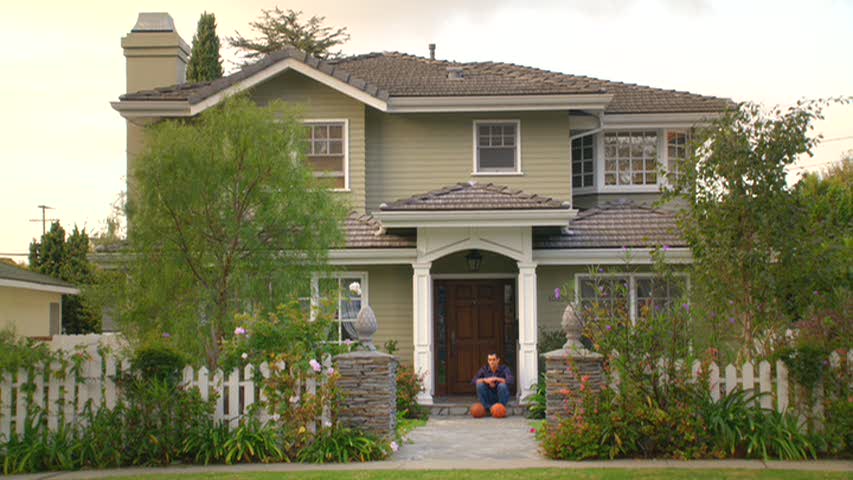 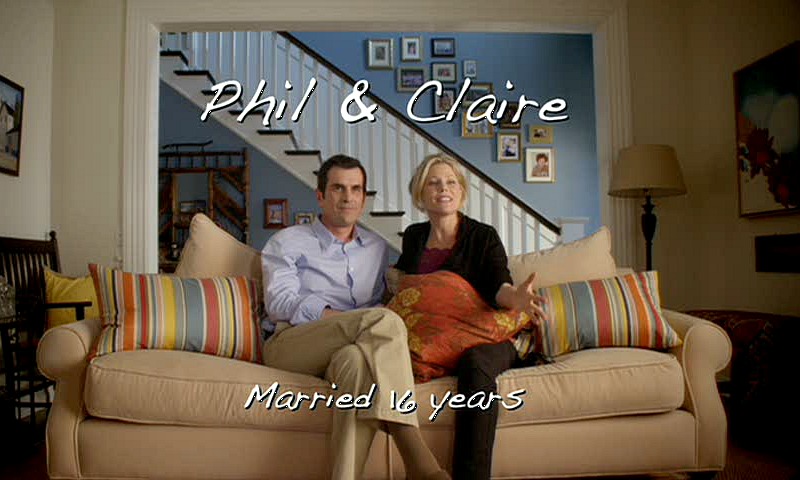 The staircase wall behind them is painted in Benjamin Moore’s Labrador Blue. 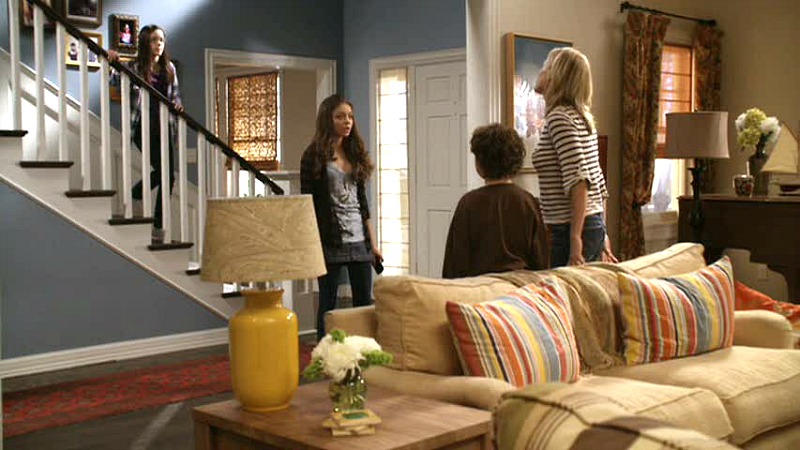 Phil and Claire Dunphy live in the suburbs with their three kids, Haley, Alex, and Luke. 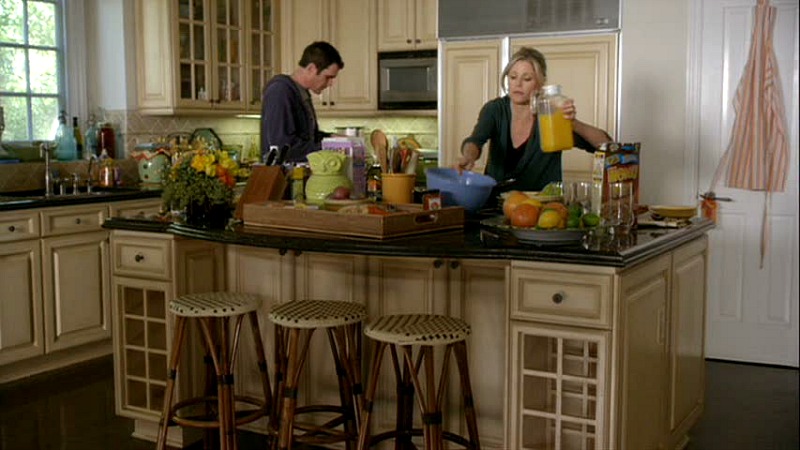 “The kitchen is now truly the center of the house,” series creator Steve Levitan says. “We couldn’t do a show called ‘Modern Family’ if we didn’t see the kitchen as part of the dining and family room in one flowing space.” 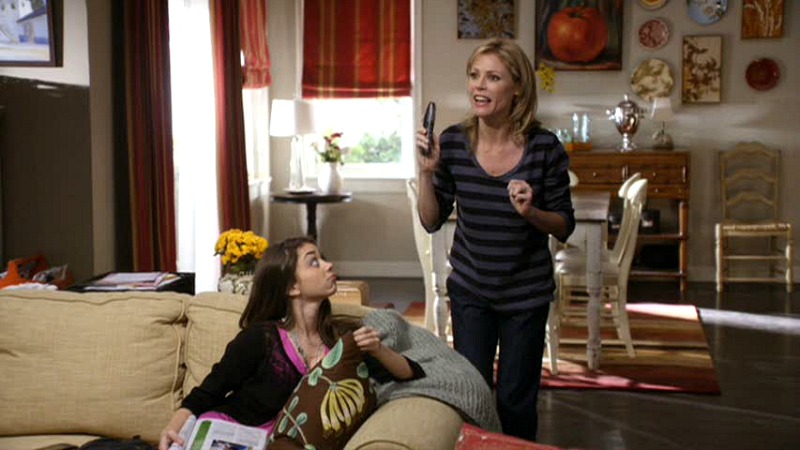 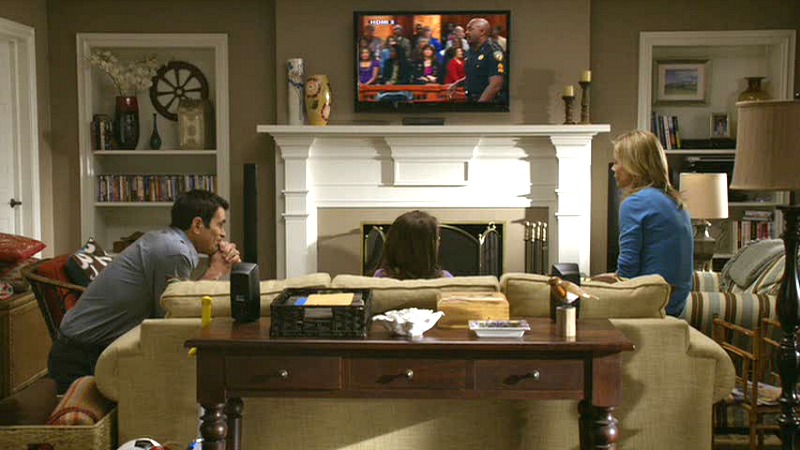 The original title of the show was “My American Family,” and the concept was that they’d be followed around by a fictitious Dutch filmmaker named Geert Floortje.

His back story was going to be that he had lived with Jay’s family as a teenage exchange student and had a crush on Claire.

They dropped that part of the story but still incorporated the family interviews on camera. 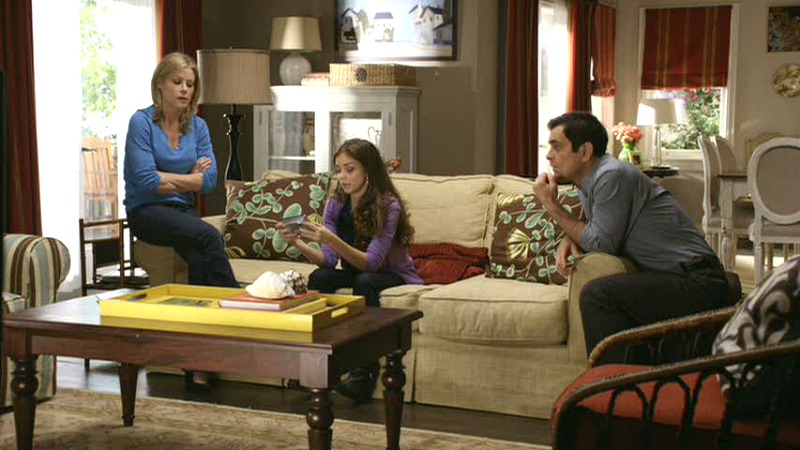 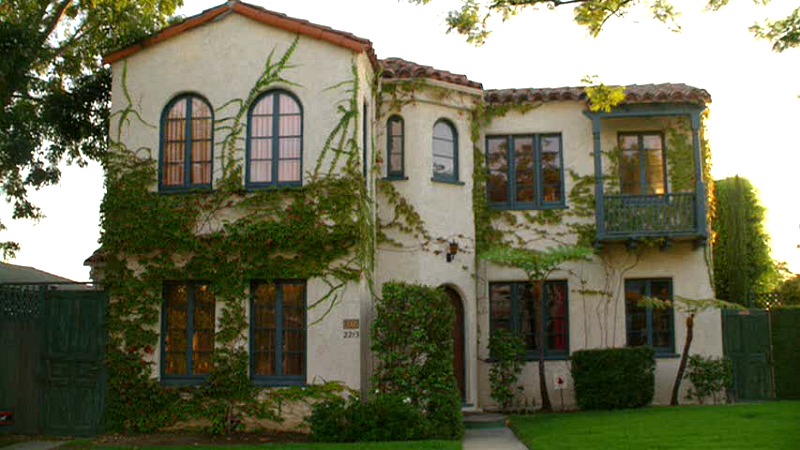 A reader named Neal wrote in to say that this is his house:

“My house is a Spanish style SFR built in 1929 near Fox Studios where the show is actually filmed and virtually all interior scenes are done at Fox for all three houses. They do use my house for the exterior shots.” 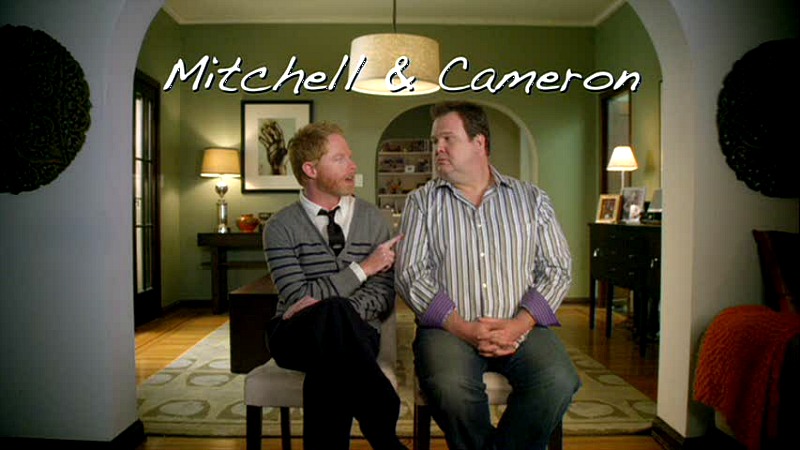 They wanted it to look like the kind of home you’d find in the Hancock Park area, production designer Berg says, so they added details like tiled kitchen countertops, arched doorways, and crown molding. 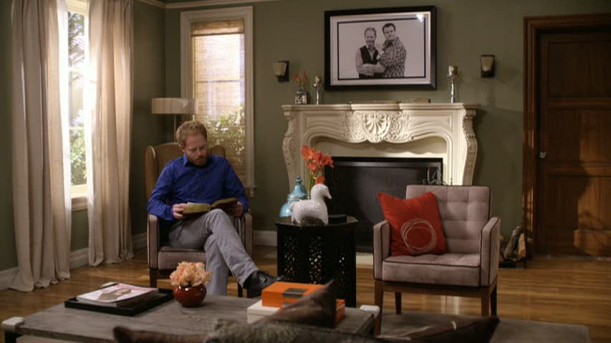 The main rooms are painted in Benjamin Moore’s Louisburg Green. 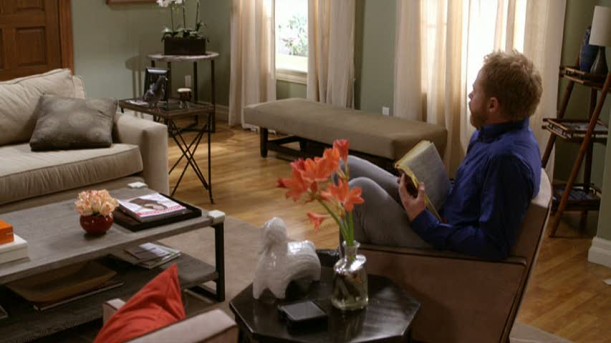 The house is a mix of traditional, contemporary, and Asian design.

Eric Stonestreet, who plays Cameron says, “We like to joke that they

went to Asia to get a baby that would match their décor.” 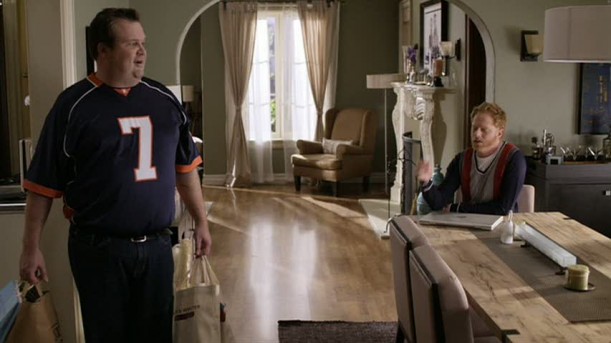 faces were painted to look like Mitch and Cam’s: 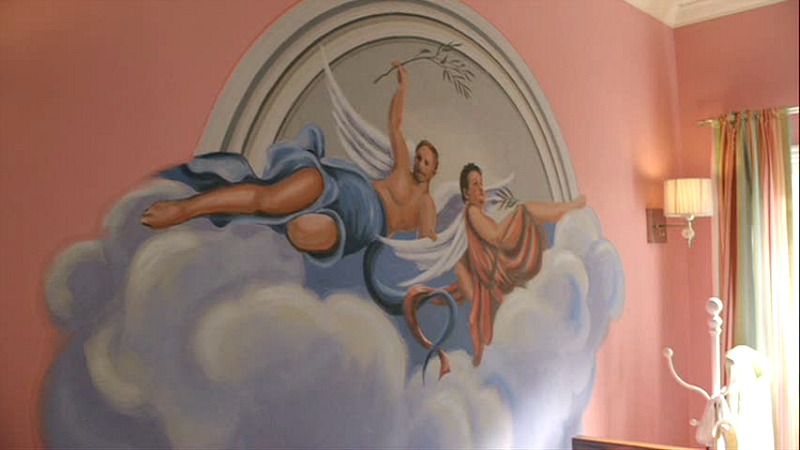 On the show they live on the ground floor and rent out the upper level of the house. 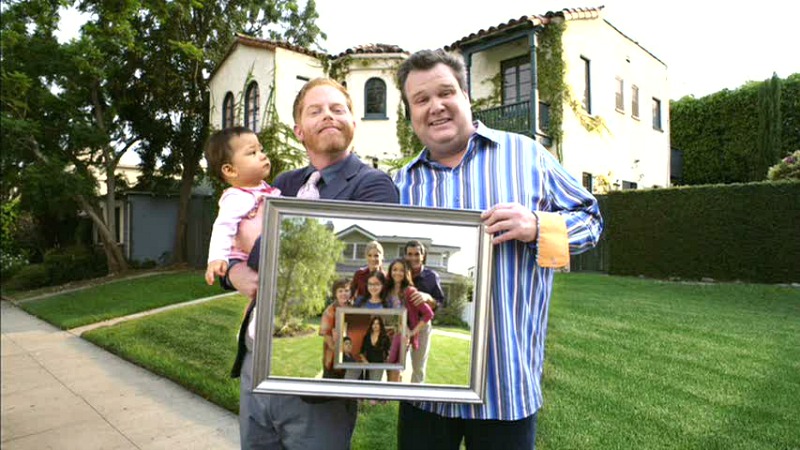 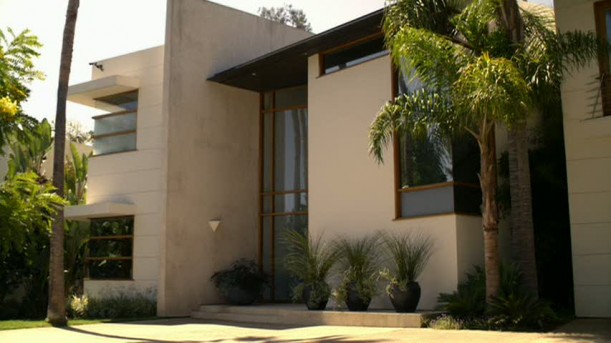 Series co-creator Steve Levitan says they didn’t have to look far to find the perfect house for family patriarch Jay and his new wife Gloria to live in because it’s right down the street from his own home:

“I would drive past it every day, and it looked like the modern house that so many rich divorced older guys seem to end up in.” 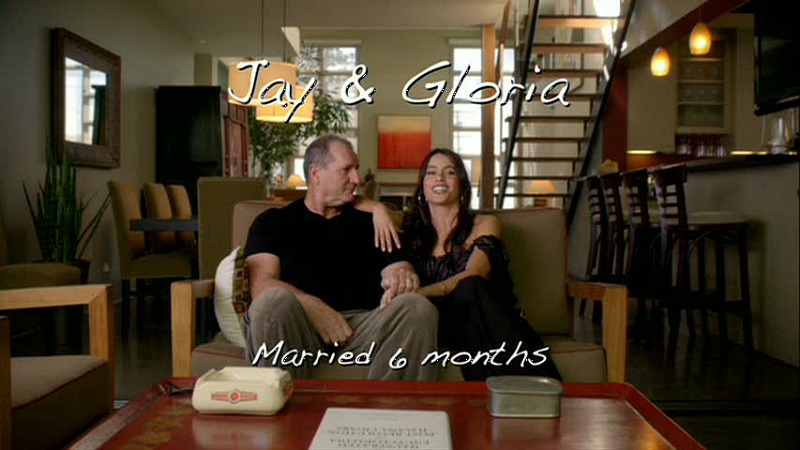 mosaic of windows and a handle that is off center and diagonal: 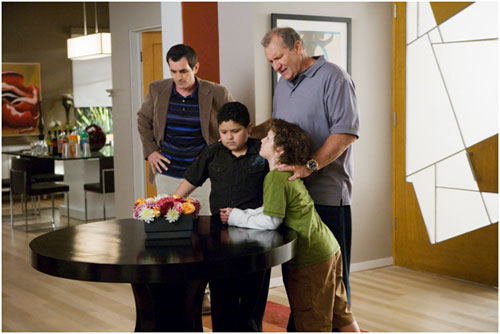 That red wall in the entry is painted in Benjamin Moore’s Currant. 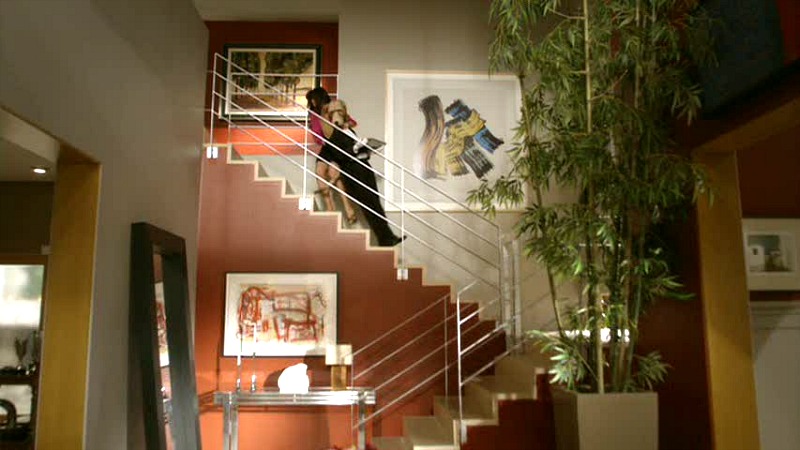 Production Designer Richard Berg says the concept was that the house was white on white when Jay was living alone as a bachelor.

Then his young new wife brought in the animal prints and vibrant colors when she moved in. 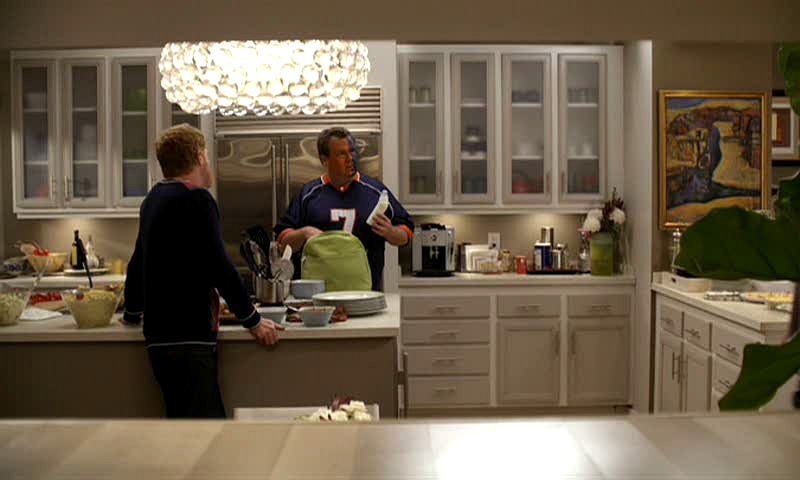 Jay complains about the overwhelming number of pillows in their bedroom: 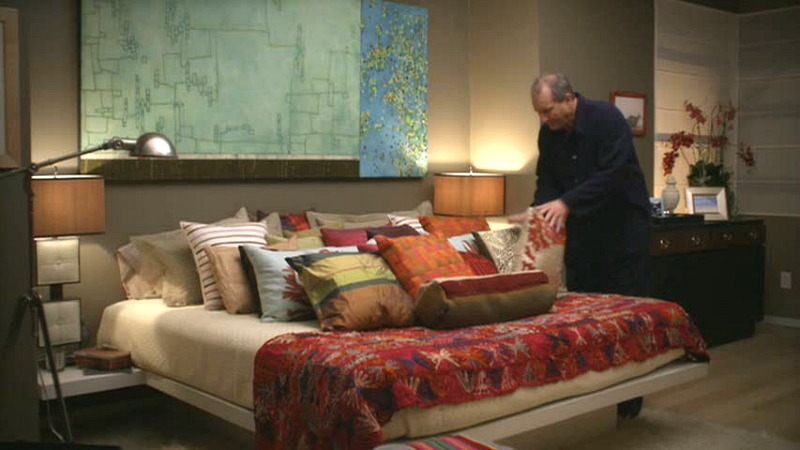 The photos in this post are screenshots I took while watching the episodes.

You can catch the show Wednesday nights on ABC. 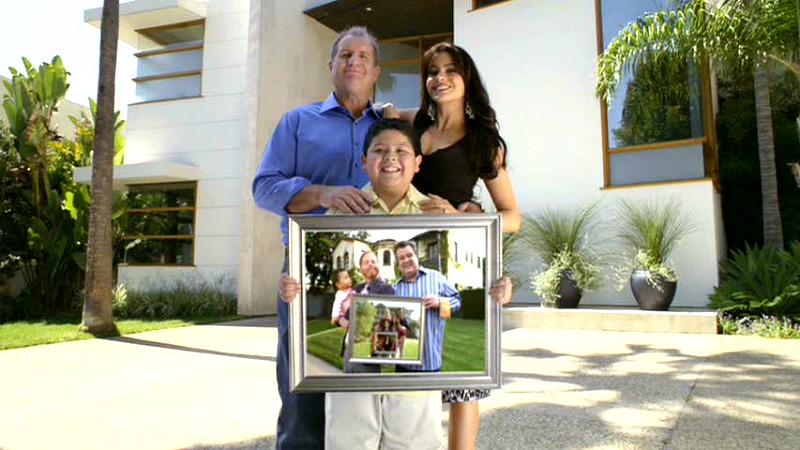 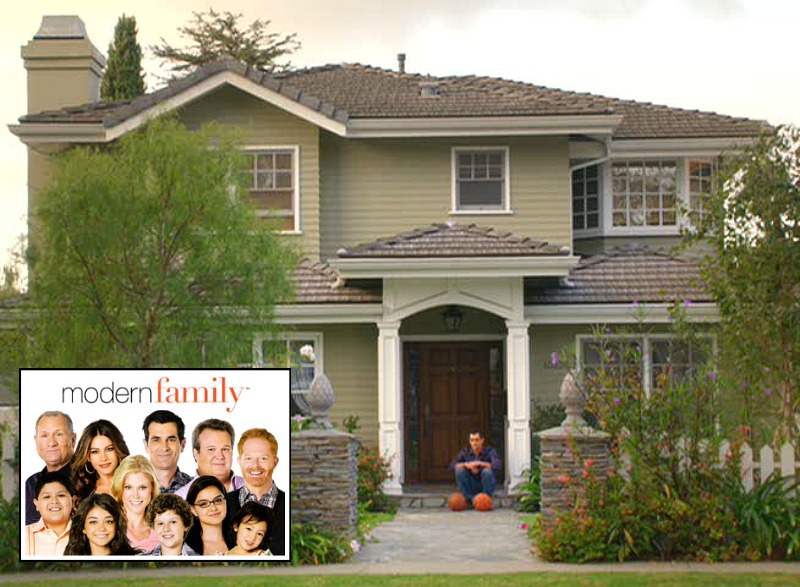 You’ll find set photos and some source information in an article at the LA Times.

The Dunphy house is on the market and you can read about it here! 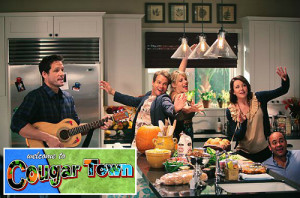