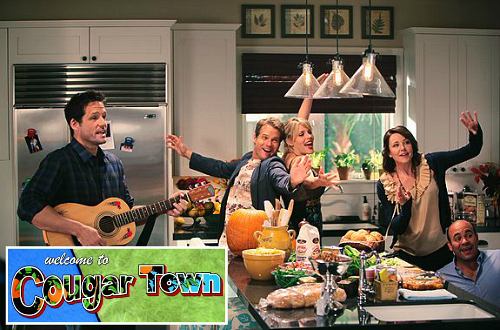 When the Courteney Cox sitcom premiered in 2009, I refused to watch at first because of the terrible title.

When I finally caught an episode, I was surprised by how much I liked the show. And the sets are great, too.

Courteney Cox plays Jules Cobb, a single mom to a teenager named Travis. She works as a real estate broker, so score another point for the show because we get to go along with Jules when she shows houses.

Let’s take a closer look at the set design and sources for Courteney Cox’s house on the show.

The Sets on “Cougar Town” 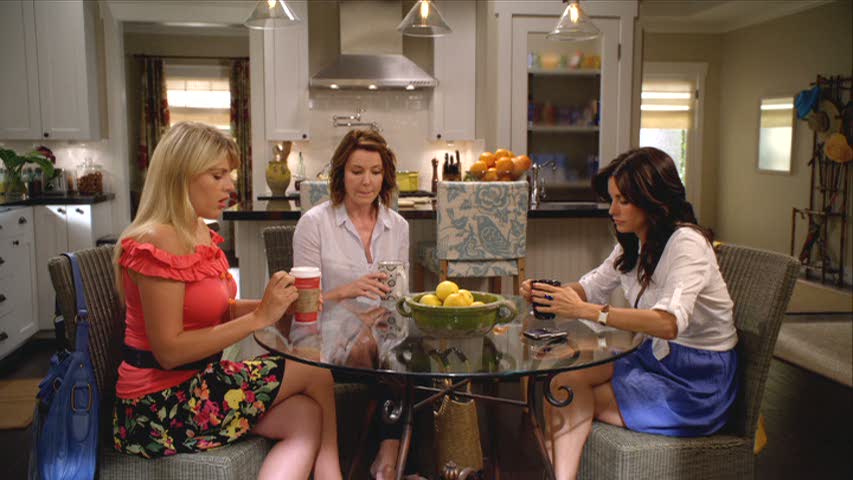 Jules lives in Florida, surrounded by friends dubbed “The Cul-de-Sac Crew.” Those are her best buds shown above–Laurie (Busy Phillips) and Ellie (Christa Miller). Laurie works with her in real estate, and Ellie is her next-door neighbor.

Even her ex-husband Bobby (Brian Van Holt) is part of the group. He lives in his boat (called “Jealous Much?”) in a parking lot and seems perfectly happy there. (Or at least he did, until Jules decided to surprise him by getting the boat back in the marina…and it sunk.) 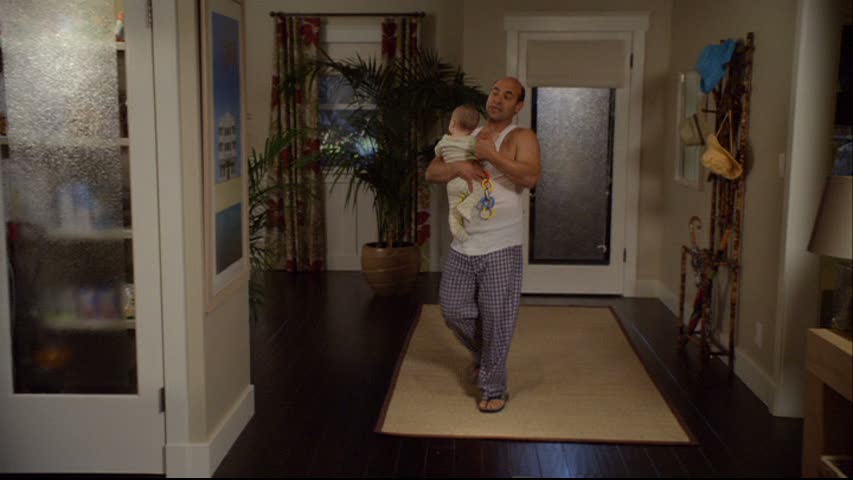 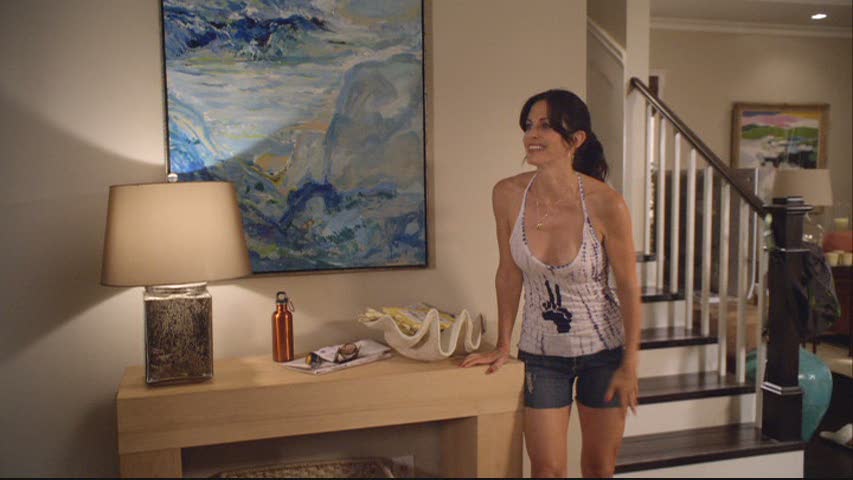 In this episode they got so comfy in their Snugglies that they didn’t want to take them off: 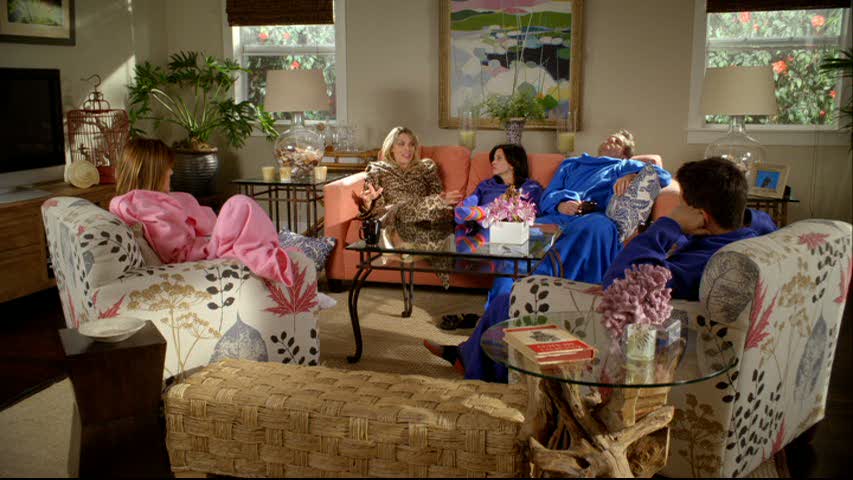 Here’s some of the source info I found: 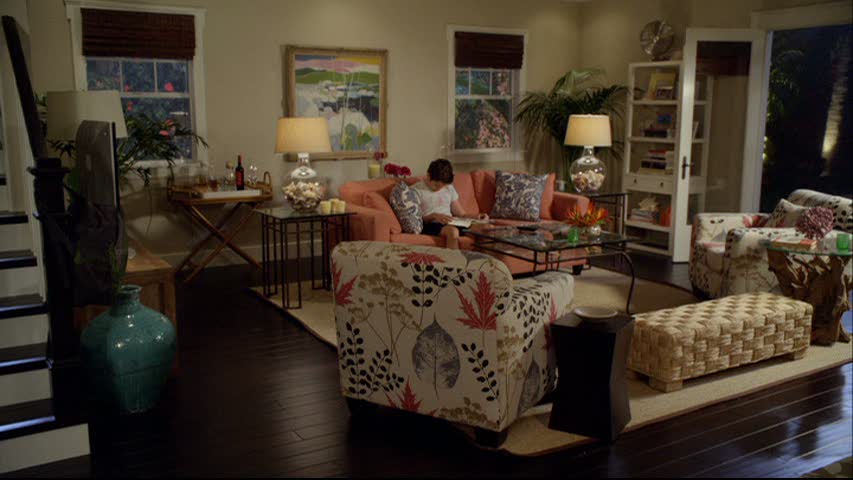 I also found this comment written by set decorator Archie D’Amico in response to some reader questions:

“The coffee table is custom made from an iron worker to match the one in the pilot episode. The painting is a rental from Omega Cinema Props. Cabot McMullen is the production designer, Gary Warsaw art director, Doritt Oberman and Derrick Hinman buyers for the early episodes and I’m the set decorator, Archie D’Amico.” 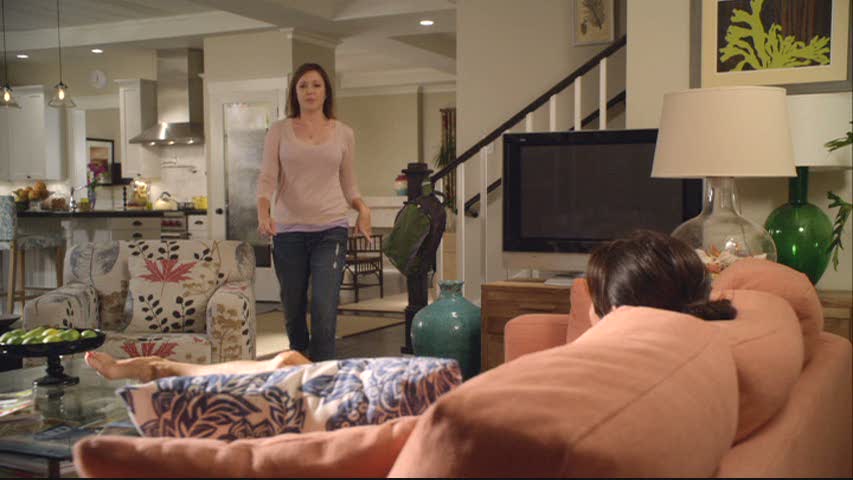 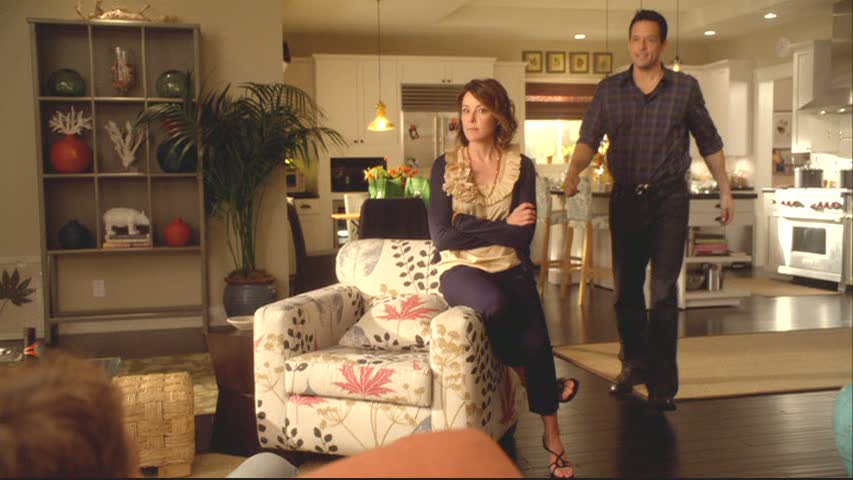 In the article, Production Designer Cabot McMullen said wanted a neutral base for the walls in her living room, so he went with Benjamin Moore’s ”Bleecker Beige” in eggshell.

Co-creator Kevin Biegel felt it was important to have some floral decor like the fabric on the chairs.

He says, “In Florida there are flower prints on everything.” 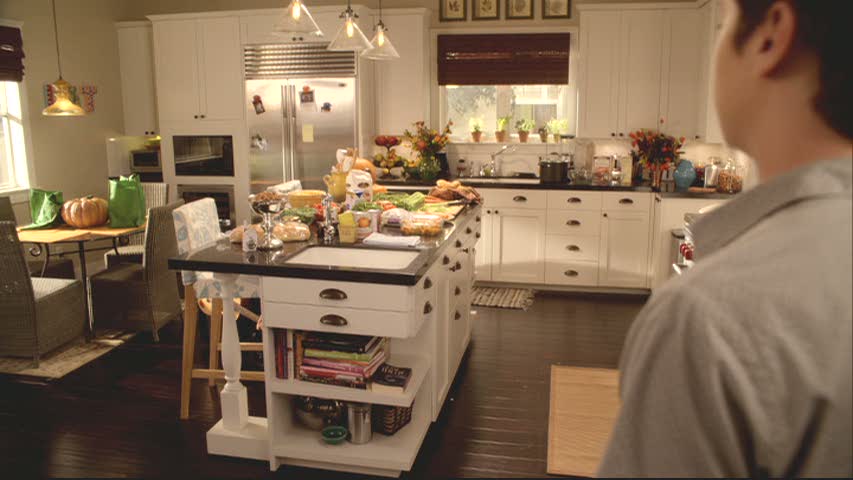 The EAT sign on her kitchen wall is a fan favorite, created with “Flares and Fountains” fabric letters from Anthropologie.

I think they’re about $14 each, but I’ve heard these letters are frequently on back order. 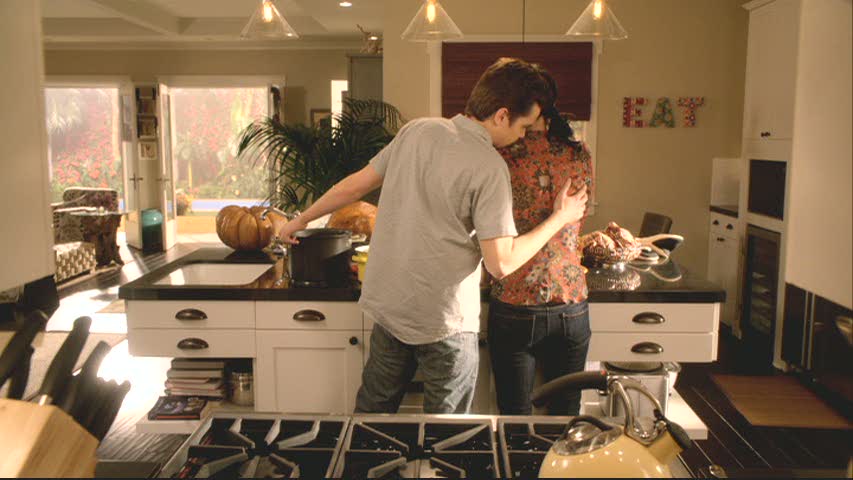 The glass pantry door has frosted glass in the center: 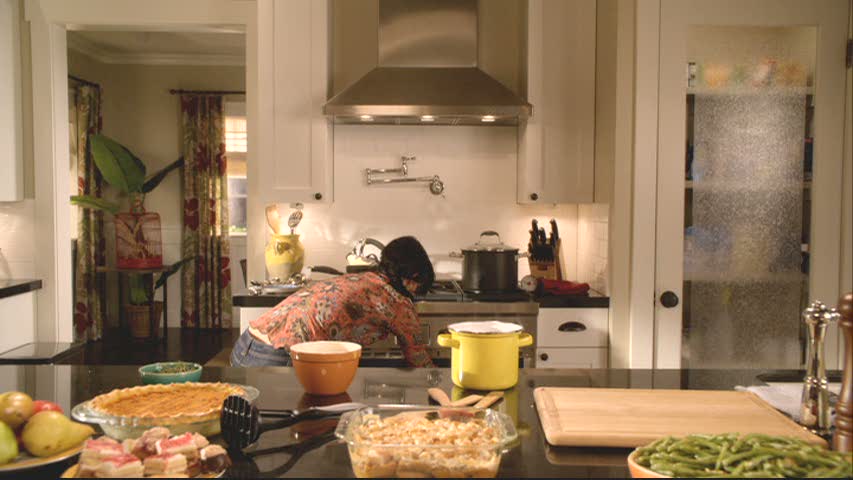 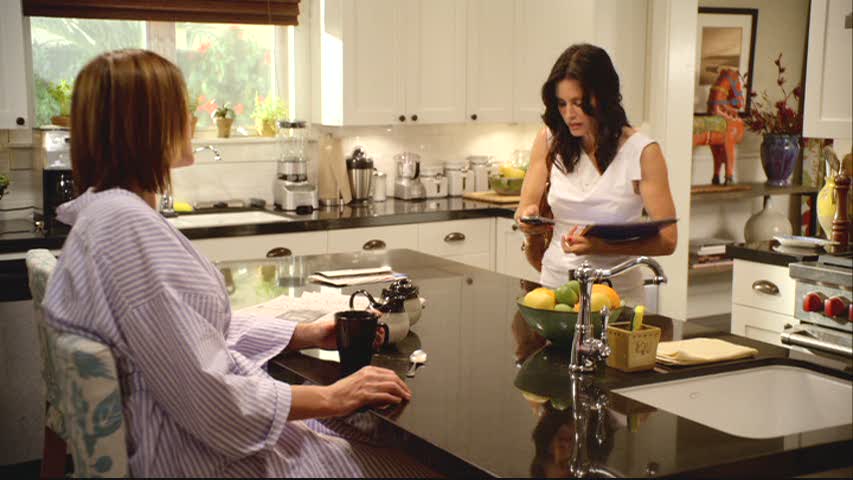 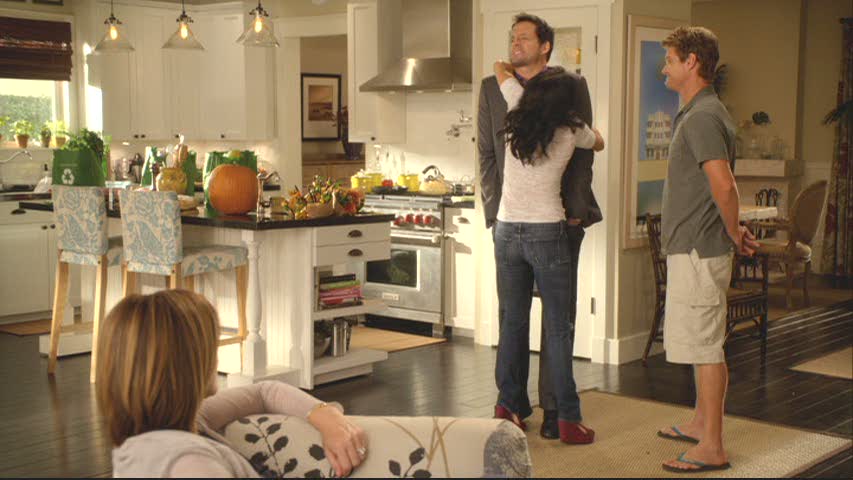 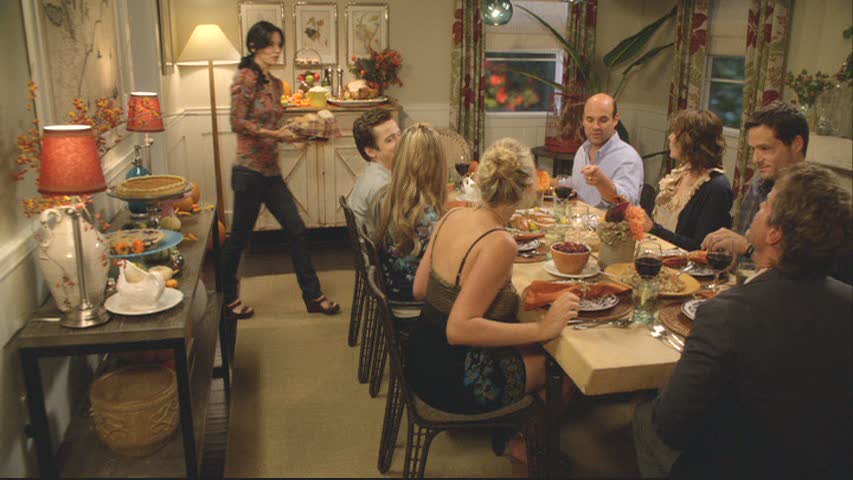 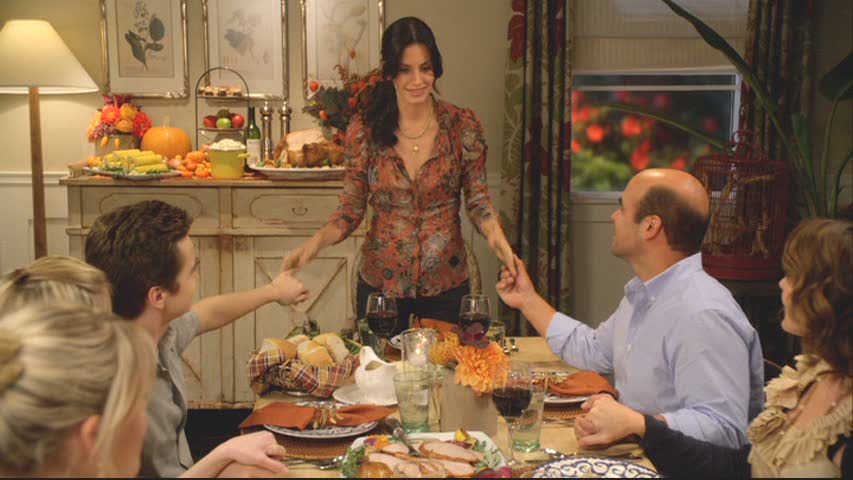 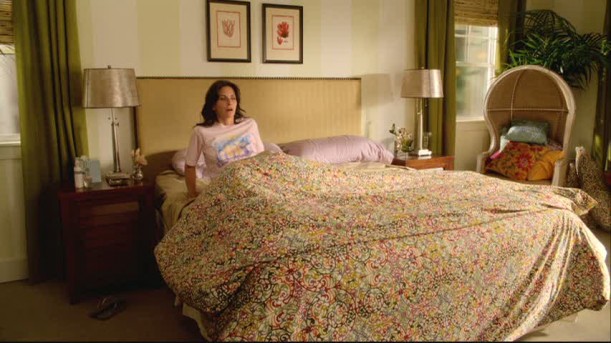 Jules remodeled her master bath and hosted a “Bath Warming Party” for her friends: 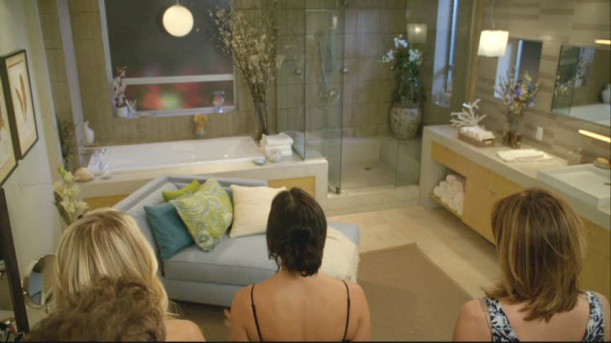 She even has a special new toilet that barks orders at you in Japanese: 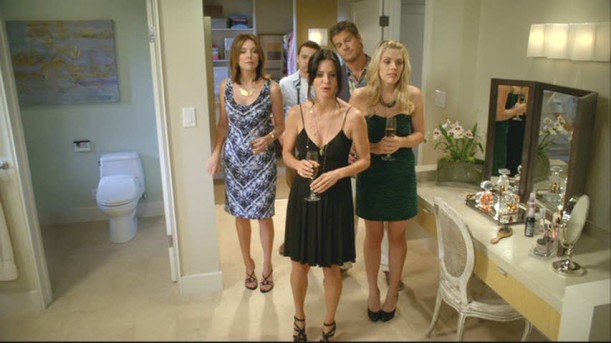 Things start to be a problem when Jules refuses to leave her beautiful new bathroom (but who can blame her?): 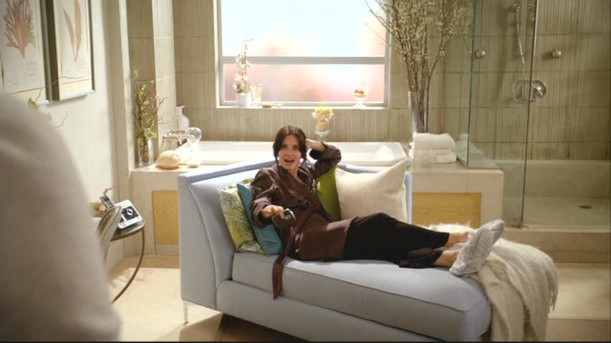 Her friends eventually stage an intervention and carry her out of there. 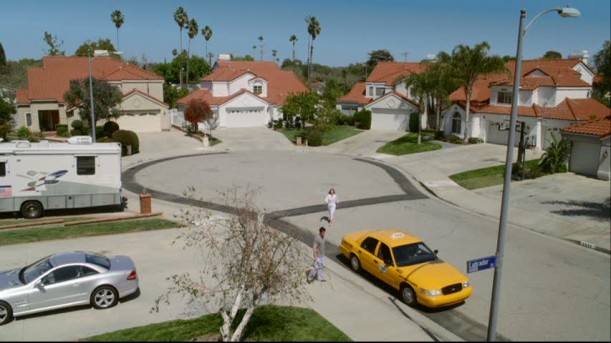 Apparently I wasn’t the only viewer put off by the title of the show.

They considered changing it to something for Season 2 that better described what it was about.

Bill Lawrence joked about going with “Friends and Neighbors” as a nod to Cox’s former hit show. But in the end, they left it.

As a running joke, the writers began mocking the name of the show each week with a tiny headline above the title card: “It’s okay to watch a show called . . . Cougar Town.” And “Titles are hard.” 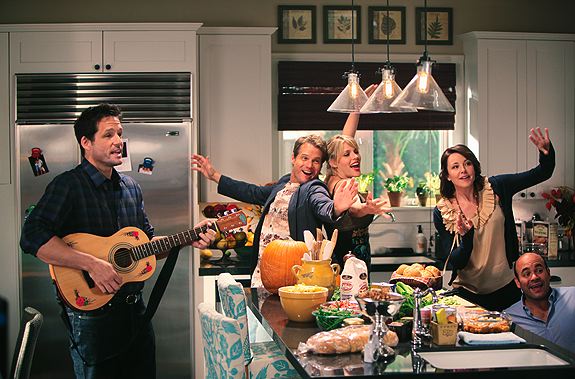 Any other fans of Cougar Town out there?

What’s your favorite house in the cul-de-sac?

Previous Post
A Look Back at the Stratford Inn from the TV Sitcom “Newhart”
Next Post
“Modern Family:” Three Funny Families and Their Houses