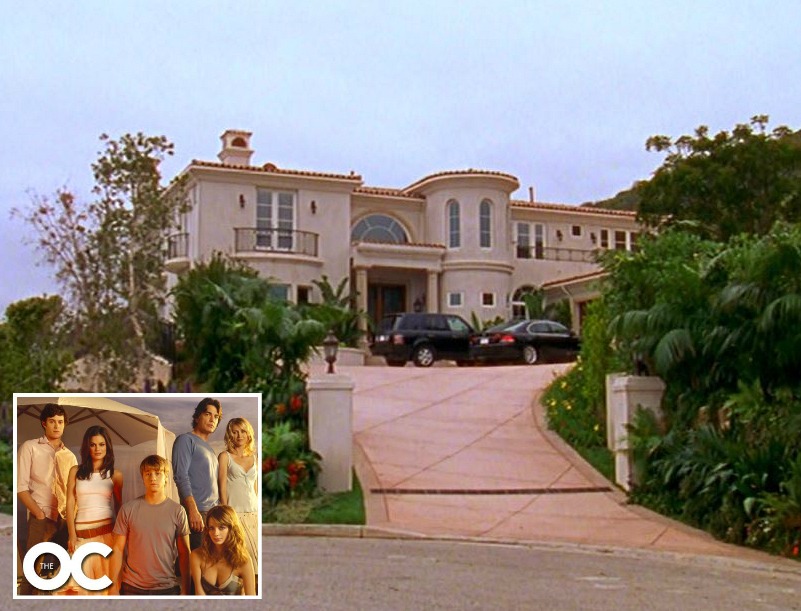 The Cohen house from the popular TV show “The O.C.” is on the market, but brace yourself — it’s not really in Orange County. The real house where they shot the exterior scenes is in Malibu.

Not only that, but I learned they actually used another house down the street from this one for the interiors and backyard scenes in the pilot. The sets were then based on the rooms from that house.

Let’s revisit the Cohen house and take a closer look at the sets they designed for it!

The Cohen House from “The O.C.” in Malibu 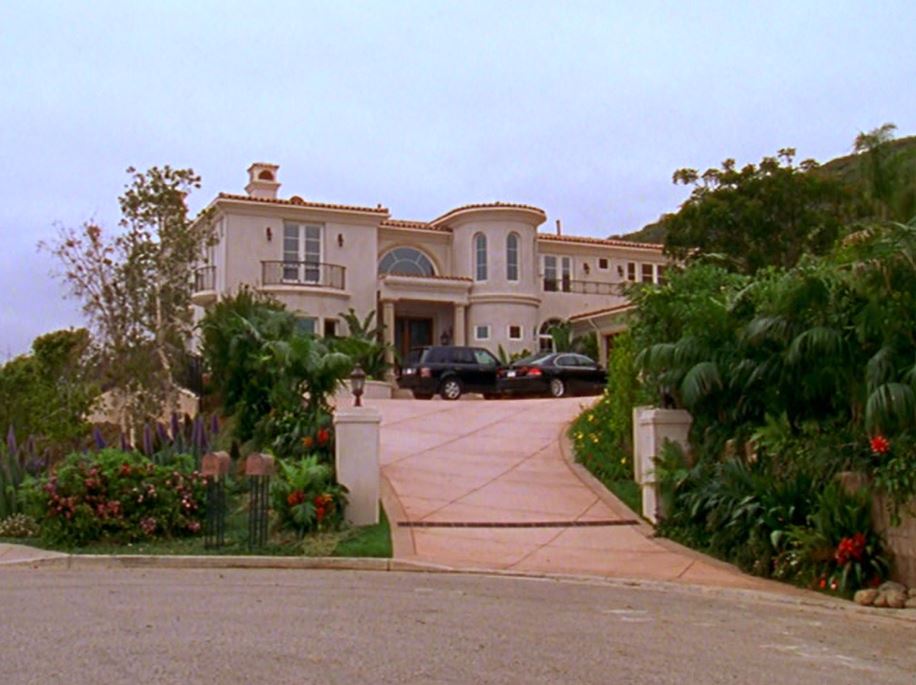 Sandy, Kirsten, Seth and Ryan lived in Newport Beach on the show, but the real house is in Malibu. The “Gated Italian Villa,” as the listing calls it, is on the market for $6.25 million.

It looked a little more contemporary and a little less “Italian Villa” 12 years ago. I had to go back and take screenshots from “The O.C.” so I could compare the two and make sure it was really the same place!

It was built in 2002, so it was new when the exteriors were shot for the show. 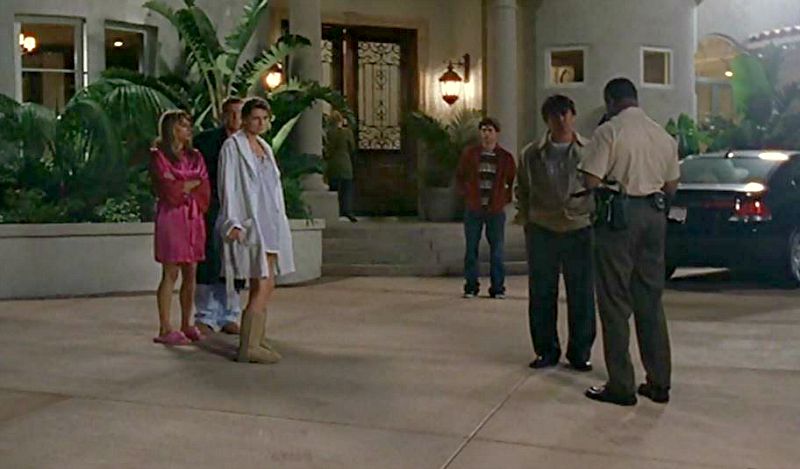 The back of the house doesn’t match the one we saw on TV. They used a different backyard for that.

We did see the back of this house in the final episode of the series, though, when the Cohen family is house hunting.

Kind of funny that they pretended the back of their own house was one they were considering buying! 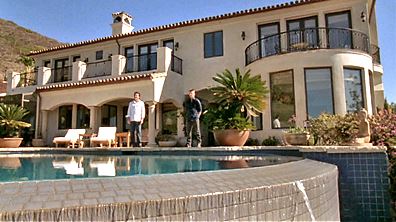 “The O.C.” interiors and pool scenes were shot at another house down the street in the beginning. 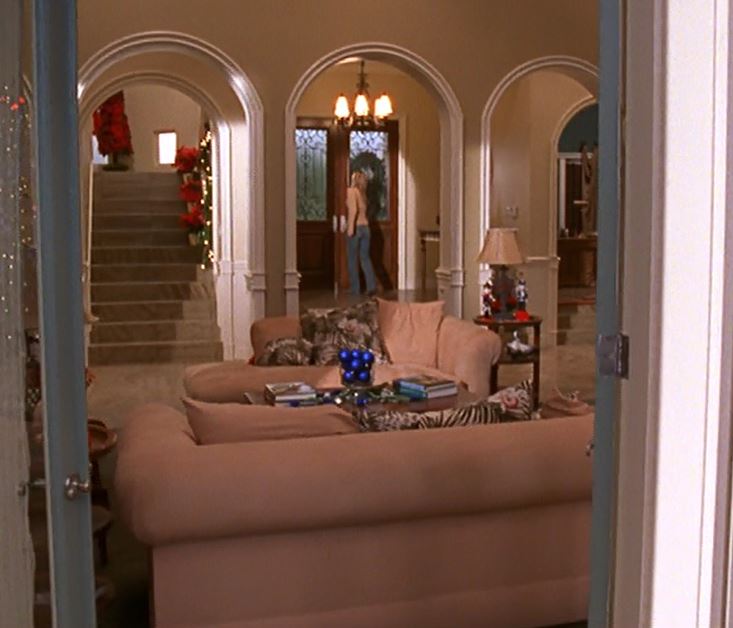 To reduce production costs, the house was recreated on a soundstage at Raleigh Studios in Manhattan Beach, about 40 miles away from Newport Beach, but exterior shots of the original house were used throughout the series. (Via)

The sets were inspired by the real interiors, such as the arched doorways that were in the house. 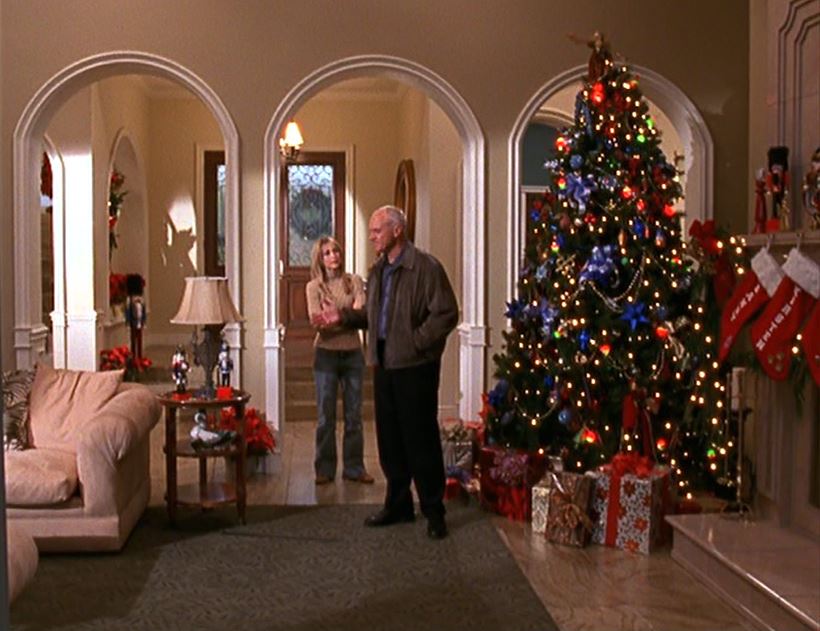 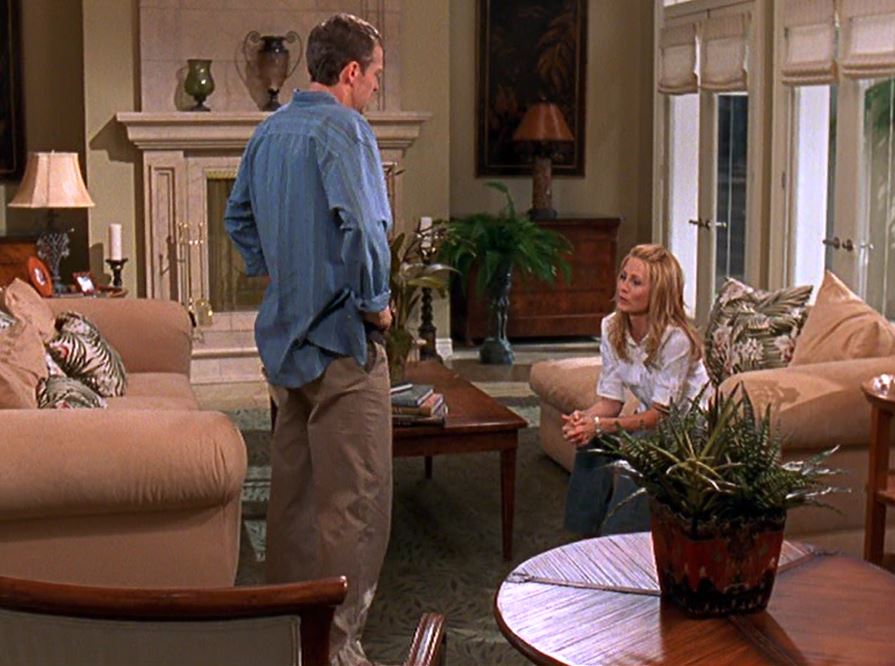 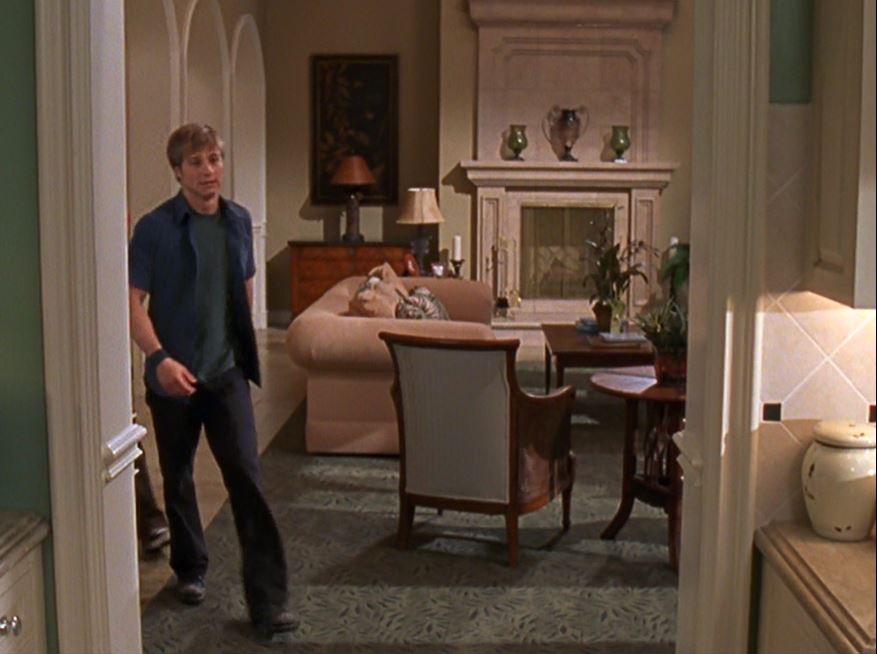 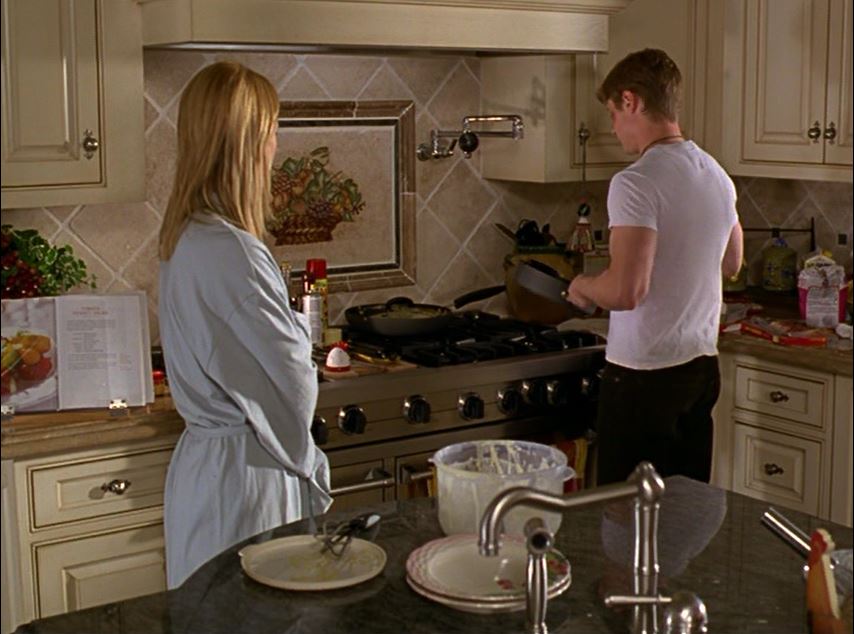 The episode above was shot in the real house. 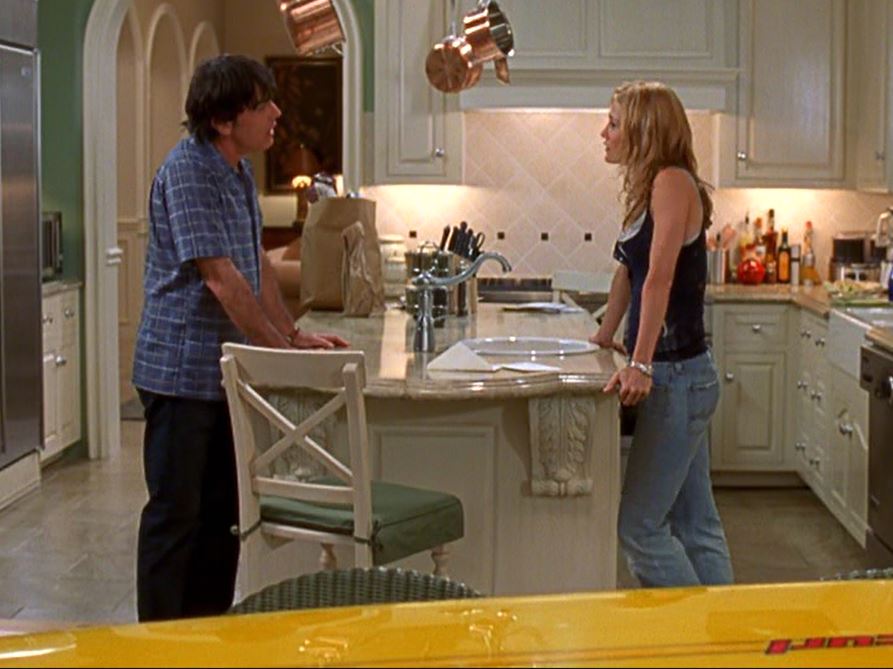 …and the island sink switches to the other side: 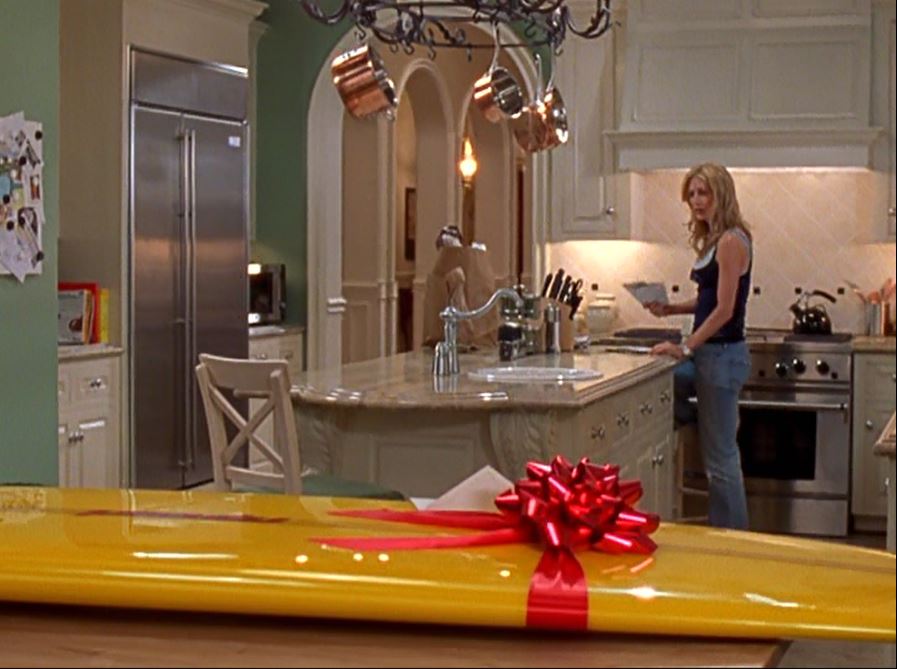 An overhead view of the Cohen kitchen: 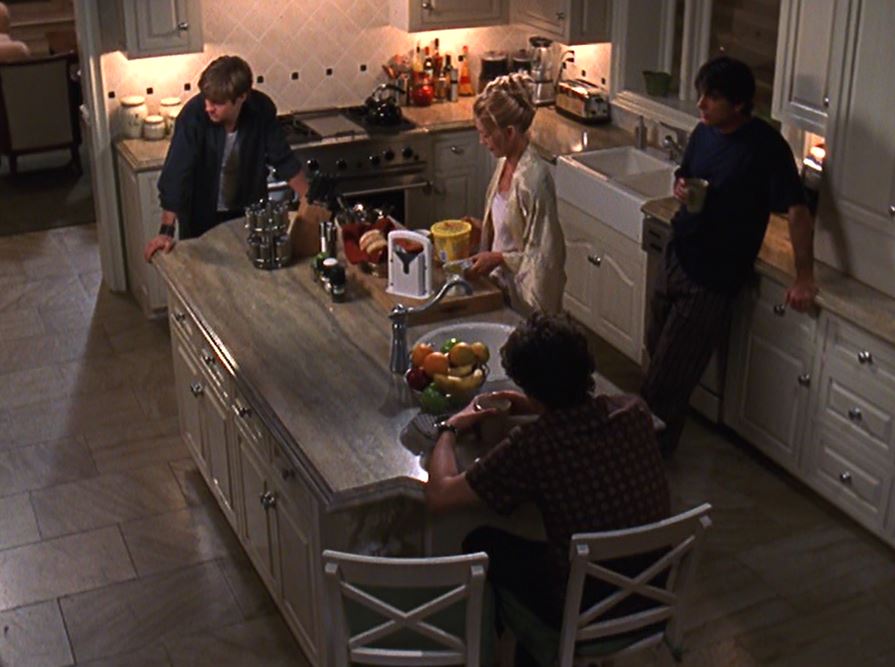 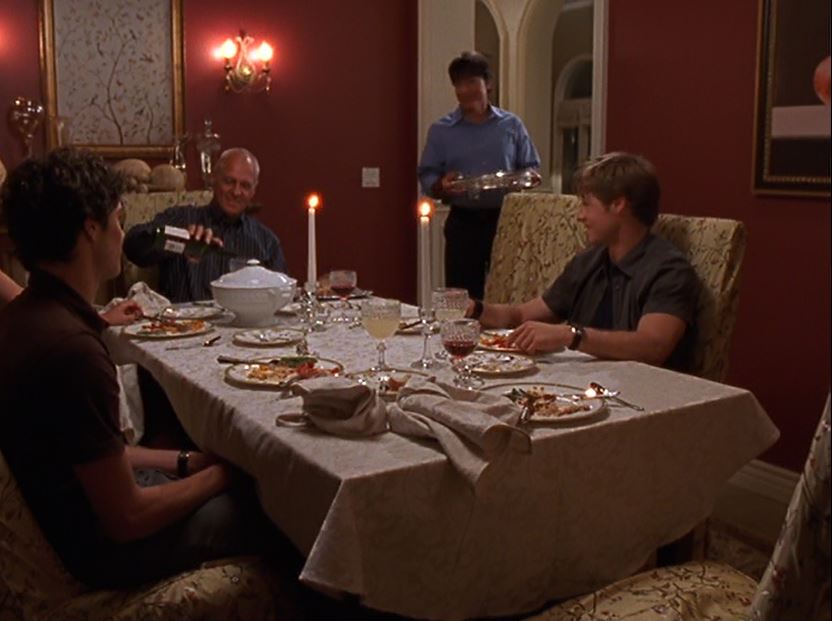 In early episodes we saw the real dining room on the other side of the TV Room: 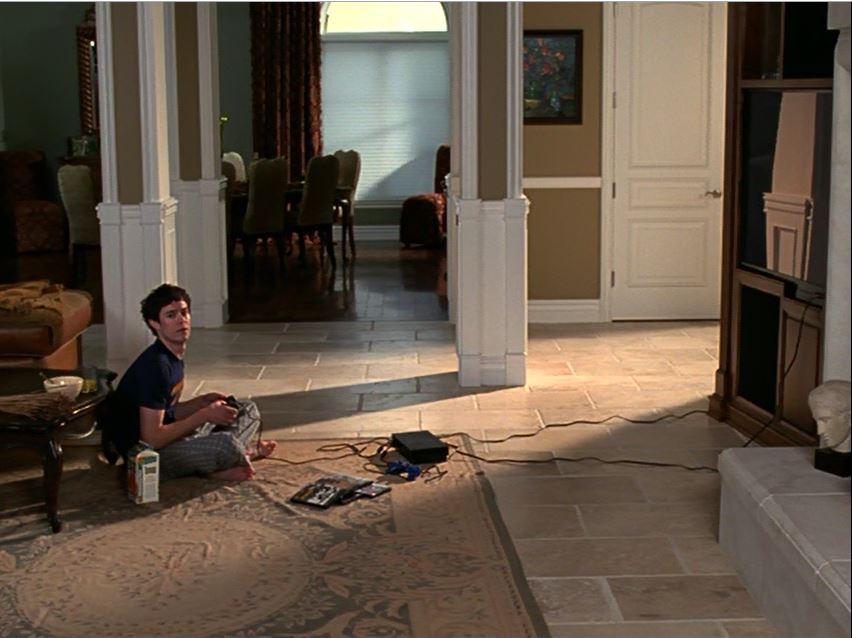 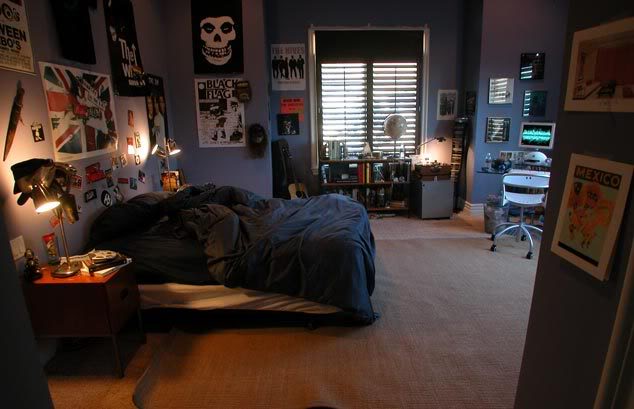 The Back of the House on TV: 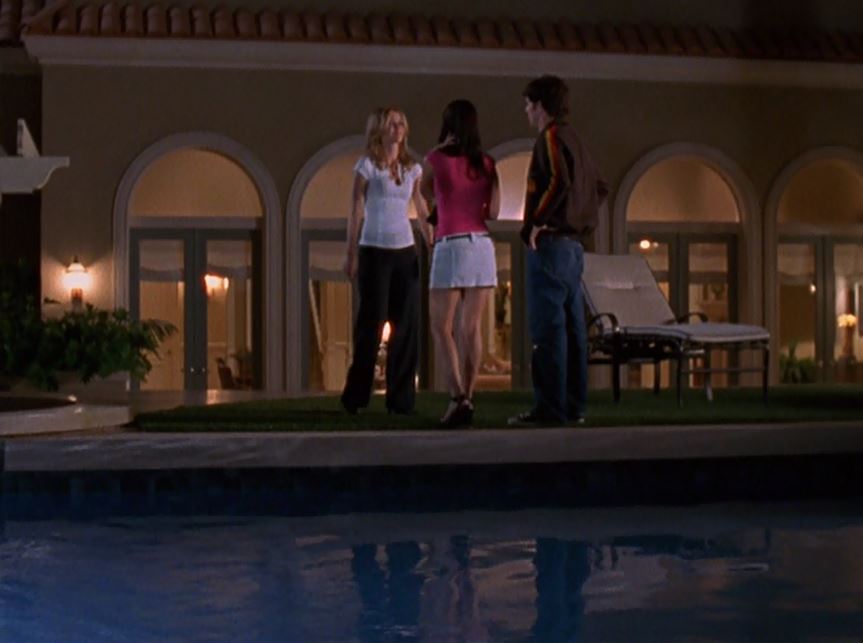 and his portrayal of the character set the tone for the show. 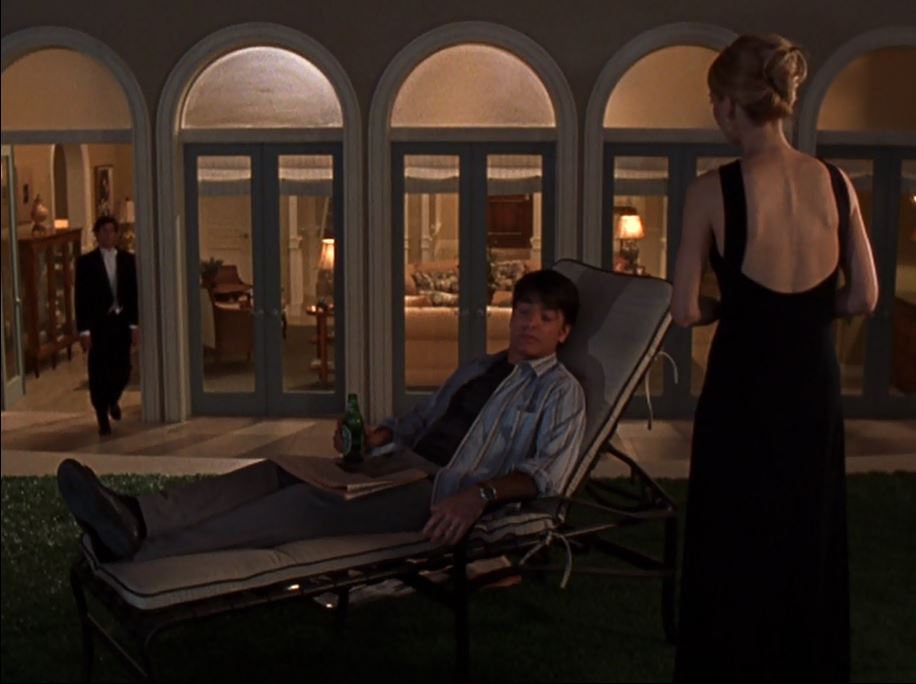 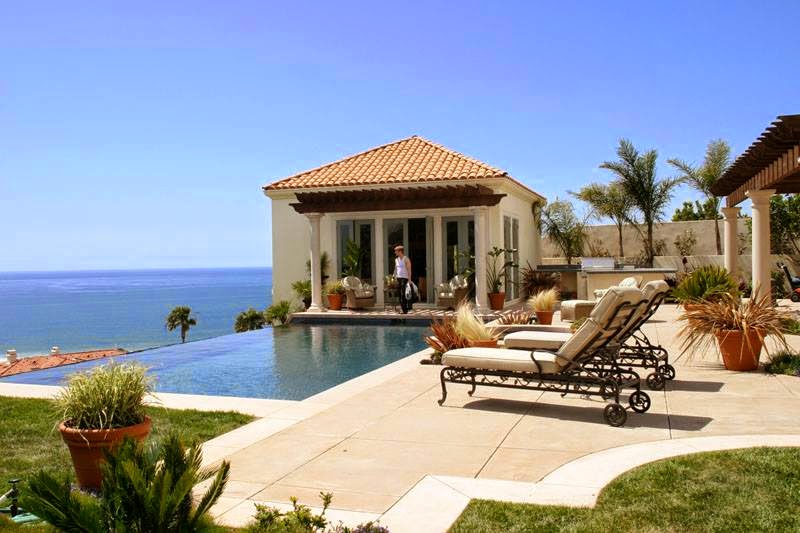 The pool house wasn’t the only thing that was kind of faked.

The pool they recreated on the set was only four feet deep.

The actors had to either crouch down or stand on their knees for those scenes. 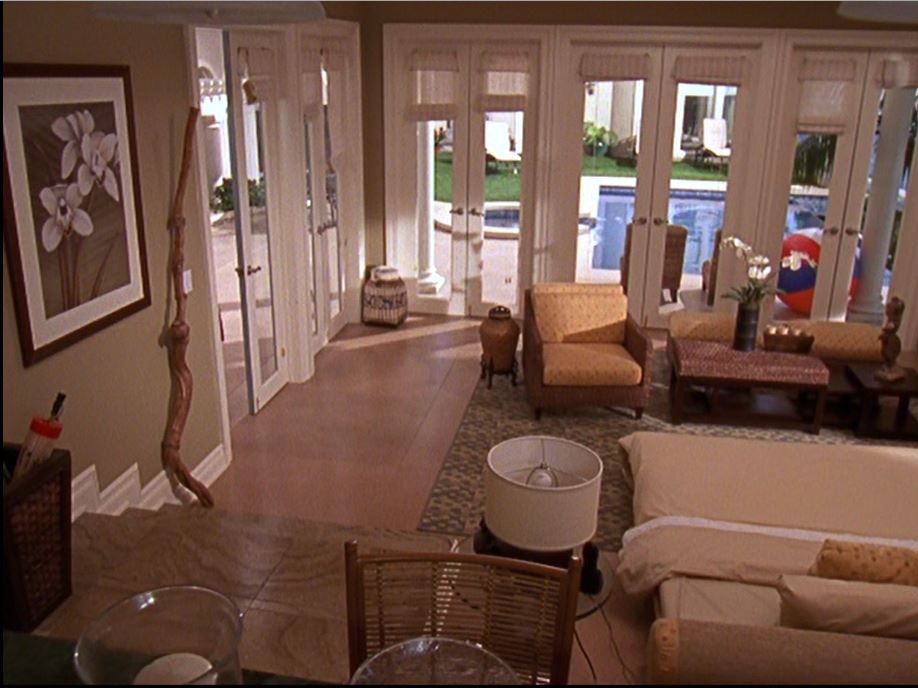 Creator Josh Schwartz says the inspiration for the show was “very much based on the sort of experiences I had when I was in college as a Jewish kid from the East Coast surrounded by all these kids from Newport Beach who were water-polo players, and these very blonde girls who only wanted to date them. I felt very much like an outsider.” 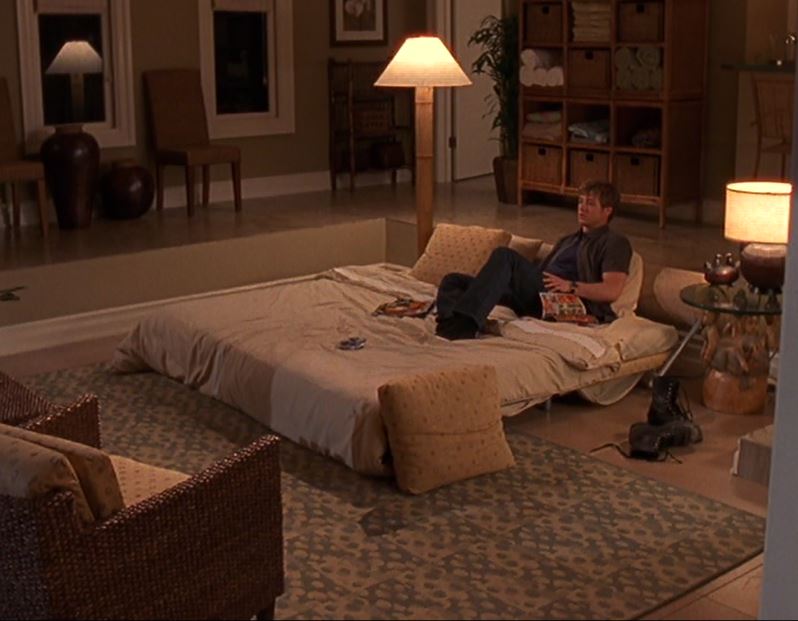 Schwartz adds, “As much as our audience enjoys living vicariously in this wealthy world, I think the true wish fulfillment comes from wishing that they had a family like the Cohens — where the parents could be that cool and that grounded and that loving, but also real parents.” 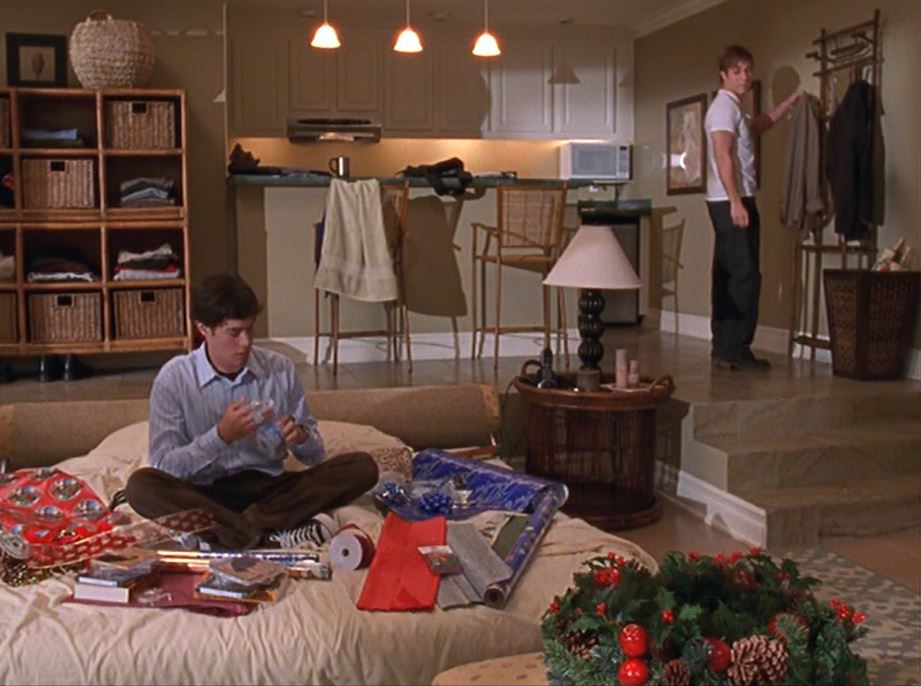 Did it strike anyone else as kind of funny that in a house this size they didn’t have a guest room for Ryan?

When Kirsten’s sister comes to visit, he has to sleep on the living room couch! 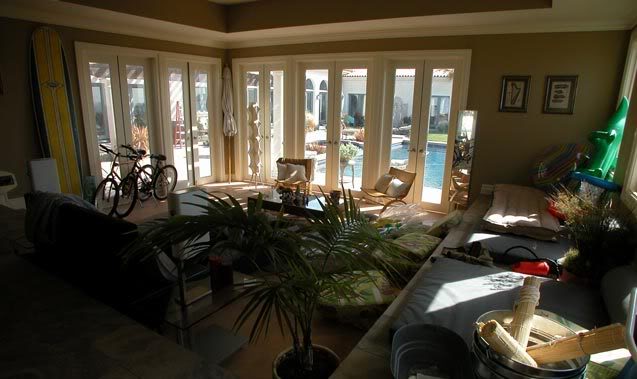 They struggled to find the right person to play Ryan. They hired Ben McKenzie within days of shooting the pilot.

He hadn’t really done much before “The O.C.”

The show made stars out of young actors like him, Adam Brody, Rachel Bilson, and Mischa Barton.

The listing for the Cohen house says:

Over 4 acres with a spacious pool area with a spa, waterfall and outdoor fireplace provide amazing entertaining with a breathtaking view of the Malibu Coastline.

Full of Natural Light and Beautiful finishes of wood and stone with French Doors that open from a Formal Dining area and Living Room to a wonderful covered outdoor dining area.

Dramatic Foyer welcomes your guest to a beautiful view and leads them through French Doors to the outdoor dining and patio. Gourmet Kitchen and Breakfast Area open to an outdoor BBQ area with a Fireplace. Master Bedroom and Bathroom have sweeping views of the entire Santa Monica Bay.

Nearly every bedroom offers a balcony and a view of the ocean and/or hillside. Three-car garage with ample guest parking. Minutes to surf, shopping and schools. Gated and Private! 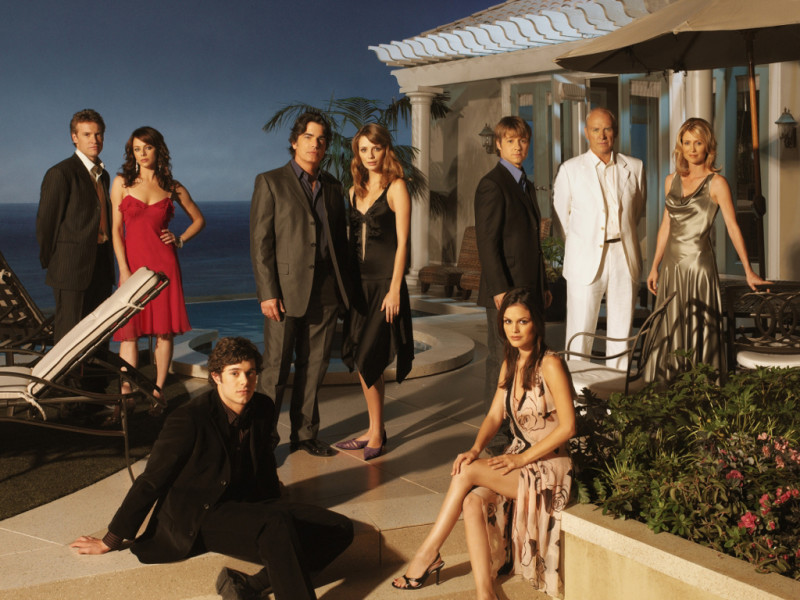 For more photos and information about the filming locations used on “The O.C.”: