Hey, everybody! I’m back after spending eight days in the Washington, D.C. area. It was a great trip but, as my daughter Lily said, “It’s good to be home again.”

We took a trolley tour through Georgetown this week because I had to see all the old townhouses there. And of course I elbowed my way into a window seat and snapped pictures as fast as I could. I knew you’d want to see them, too.

Our trolley tour guide called himself “Super Dave” (not to be confused with my Super Dave). He was full of interesting stories and information about the neighborhood. He said the area attracts lots of high-ranking government officials and news-anchor types. I kept hoping to see someone famous walking down the street, but never did. This house, according to Super Dave, was once the home of Henry Kissinger.

Now, keep in mind that I was on a bumpy, narrow street in a trolley as I took these pictures, and the traffic was crazy (cars and buses kept getting in my shots). But I think I got some good ones anyway. Take a look:

Georgetown was founded in 1751 before the city of Washington and the District of Columbia was established. It sits along the Potomac River and was one of the largest cities in Maryland before being assimilated into D.C. in 1871. There are quite a few embassies in the neighborhood, including ones belonging to France, Sweden, and Mongolia. Here’s a row of them that we passed:

In areas where developers wanted to build office buildings or other commercial buildings, they were required to leave the facades of the old houses and build behind them. It kind of fascinated me to see these “false fronts” with contemporary buildings looming behind and above them.

There were lots of little shops and restaurants.

Streetcar tracks were installed in the 1890s but have been out of use since the 1960s.

Movies that filmed scenes in Georgetown include St. Elmo’s Fire, Dave, Wedding Crashers, and Election. Now I want to go back and watch some of them again.

This house is hard to see behind the tree, it’s so tiny. It is basically the width of that pink door and the window to the right of it. It looked like the Spite House to me. Super Dave said it recently sold for around $600,000. So you can just imagine what the bigger townhouses in the area go for!

I hope you enjoyed the tour of Georgetown as much as I did! Do you have a favorite house? I’m kind of partial to the yellow one right here. I think it’s interesting how paint is often the only distinction made to show where one house ends and the next one begins. 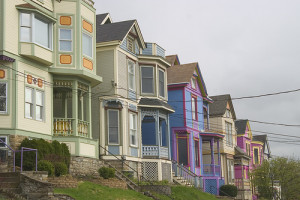 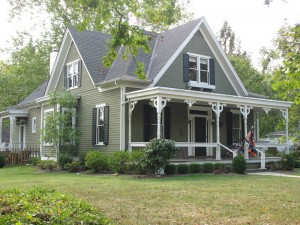