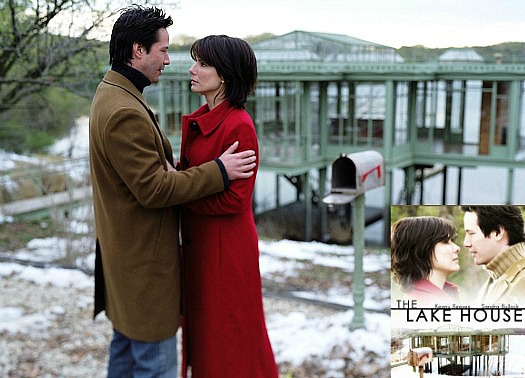 Who could forget the glass house in the romantic drama The Lake House? It was the best part of the movie for me!

In 2006, Speed co-stars Sandra Bullock and Keanu Reeves teamed up again for this remake of the South Korean film Il Mare about a doctor who falls in love with an architect she’s never actually met. Alex (Reeves) is living in 2004, but Kate (Bullock) is in 2006, which is kind of a problem.

Thanks to the magic mailbox at the lake house, though, they’re able to send and receive letters to each other. (Don’t think about it too hard.)

They built this unusual glass house for the film on Maple Lake in Willow Springs, Illinois.

Building the Lake House for the Movie

They were granted the use of the lake for filming as long as the site was left exactly as it had been.

According to the production notes: “After weeks of scanning lakefront locations in Wisconsin, Michigan, Illinois and Indiana and virtually every mile of the vast Lake Michigan shoreline for something that embodied all the necessary elements, The Lake House production team rose to the challenge and built the iconic house themselves.”

That means the house had to be demolished after filming.

“Location manager James McAllister returned to Cook County, Illinois, where he had worked a decade previously on Evil Has a Face at a Forest Preserve location along the tranquil, 55-acre man-made Maple Lake.

“It proved to be the perfect setting: naturally serene and romantic, with the surrounding texture and terrain Agresti had in mind.”

At least half of the movie takes place in and around the glass house on the lake, which is why it’s so maddening that we get to see so little of the interior.

This shot of Alex as he cooks in the kitchen is a prime example. It’s such a tight close-up that we’re left to imagine what the rest of the kitchen looks like:

The house had running water, but no bathrooms.

There was a maple tree in the center of it.

Alex’s father was a famous architect who built the glass house.

Alex tells his brother, “This house is about ownership, not connection.”

There are views all around, but no way to connect with them. “He built a house, not a home.”

Crowley took the 2,000 square-foot structure from sketches to completion in just ten weeks:

35 tons of steel and a crew of nearly one hundred was required to finish the house by the time filming was scheduled to begin.

“The house was actually constructed on dry land next to the lake, atop steel beams that rose 10 feet above the waterline.” They excavated nearly 1200 cubic feet of soil and let lake waters flood under the pilings.

“It wasn’t very big, but the logistics were a real challenge, especially in the limited time we had to do it,” Crowley says. “We even had a heating system installed to keep our actors warm.”

Crowley, who also acted as the production designer, says:

“The house was our most important set, the one key piece around which the story revolves. So it made sense for us to create exactly what we wanted.

“We wanted a mixture of modern and classical, something that Alex’s father might have designed.”

“In some ways its roots lie in the kind of 1960s glass box style. We also drew from the Regency Period, a style popular in England in the early to mid-1800s, to add romance and elegance to the overall look.” They also “integrated some elements of greenhouses.”

Sandra Bullock said in interviews that she loved the house and hated seeing it torn down:

“I was so disappointed that I couldn’t keep it, move it, and at least use it as a guest house somewhere.” 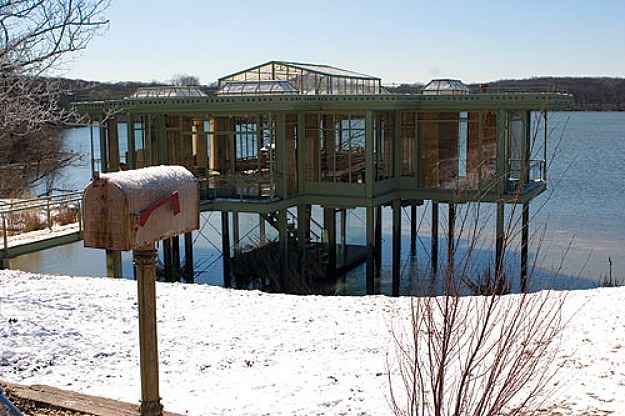 Thanks to Triangle Modernist Houses for providing the production photos and information. 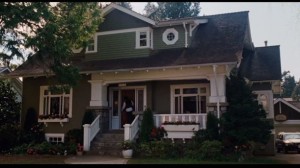 Previous Post
The Craftsman Bungalow in “I Love You, Beth Cooper”
Next Post
Samantha’s Malibu Beach House from “Sex and the City”