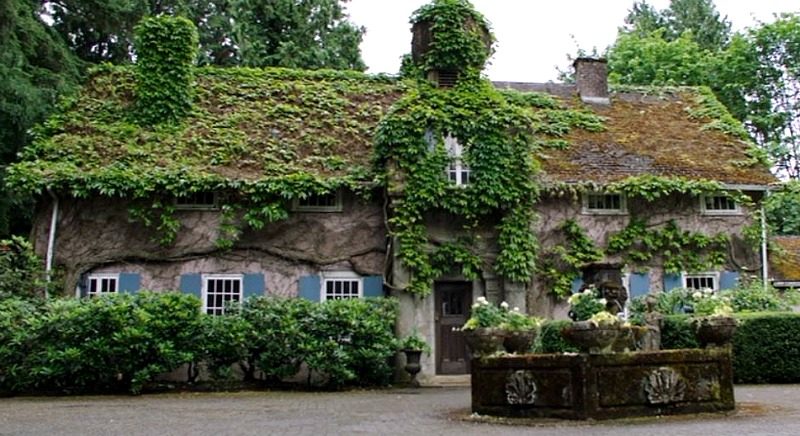 If this charming, ivy-covered cottage looks familiar to you, it’s probably because it has starred in many movies and TV shows over the years. It had a memorable turn in the 2015 romantic drama The Age of Adaline. But it has also appeared in the 2019 thriller The Intruder and on popular TV shows like “Riverdale” and the Netflix series “Away.”

What I’ve found is that once you’re familiar with Foxglove Cottage, you’ll be surprised by how often it turns up. The shutter colors may change, and there may be more or less ivy covering the front of the house depending on the season, but it’s unmistakably the same place.

It sits at the end of a long, private lane on Foxglove Farm in Langley, British Columbia. Besides the fact that it has a fairytale cottage look, it’s become a popular filming location because so many productions shoot nearby in Vancouver.

Let’s take a look at some of the movies and TV shows the cottage has appeared in and how it looked in each of them!

Foxglove Cottage in “The Age of Adaline” 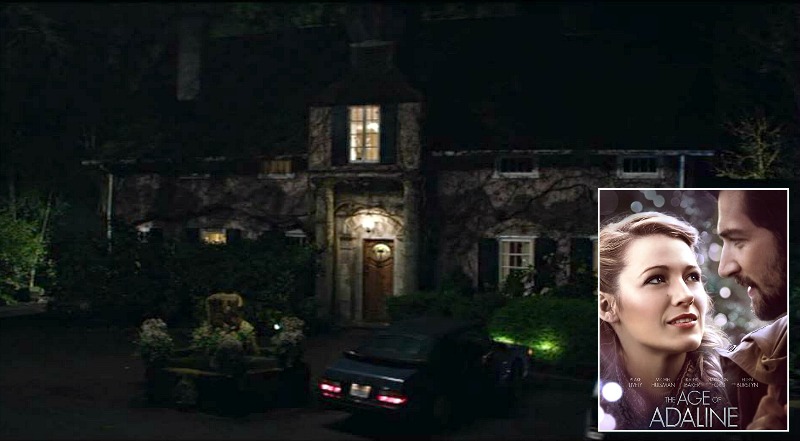 For years I’ve heard from readers asking for intel on the house from The Age of Adaline, the 2015 romantic drama starring Blake Lively as a woman who doesn’t grow old.

I was excited when I realized that it was filmed on location at Foxglove Cottage, both inside and out.

In The Age of Adaline, the shutters were a dark green color:

Director Lee Toland Krieger says, “This was a house about 40 minutes outside downtown Vancouver. We went out there pretty early in the process and I had a very clear idea of what I wanted this house to be like. And candidly, it wasn’t what I had imagined, but it had such remarkable character.”

He adds he was “hoping to make a discovery” and was disappointed to learn how many other productions it had already appeared in.

But the homeowners, he says, “were great about having the crew come in and take over their house, which is a very invasive process. If you haven’t been through it, I can’t recommend it.”

This white kitchen with the painted brick archways is distinctive enough that you’ll start to spot it pretty easily when you see it in other movies.

The front den has a large fireplace and was wallpapered in The Age of Adaline:

In other movies you’ll see this den was painted black instead.

Adaline’s bedroom has yellow wallpaper that you’ll see in other movies, too:

The private, tree-lined drive was a big selling point for the Age of Adaline director.

They even changed the locations for some of the scenes that were originally planned to take place elsewhere and moved them to the property to take advantage of how beautiful it was. 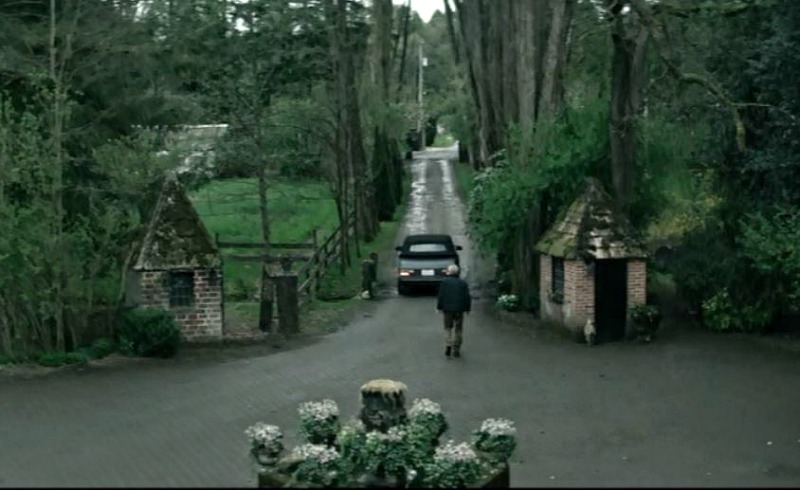 Oddly, even though the house made a big impression in this movie, they really didn’t give us many clear shots of it.

The exterior was always filmed in darkness and fog, and the close-ups of the actors kept us from seeing much of the rooms, which was frustrating.

That’s why I was so happy to see more of it in The Intruder. 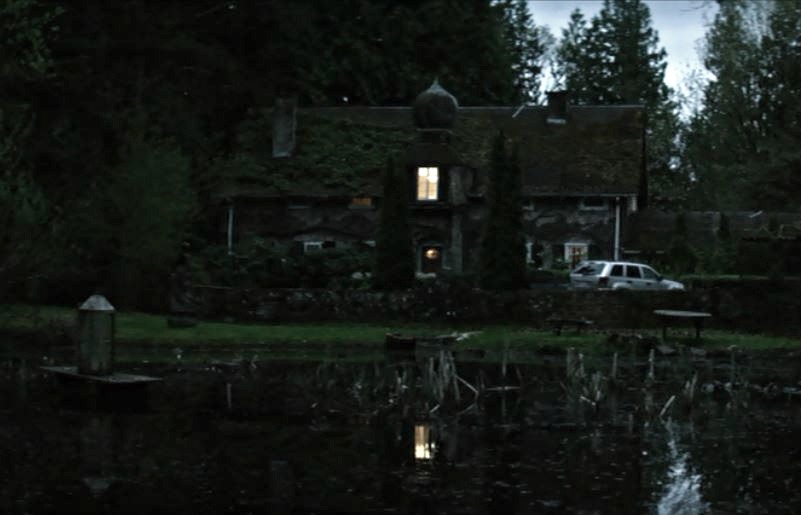 Foxglove Cottage in “The Intruder” 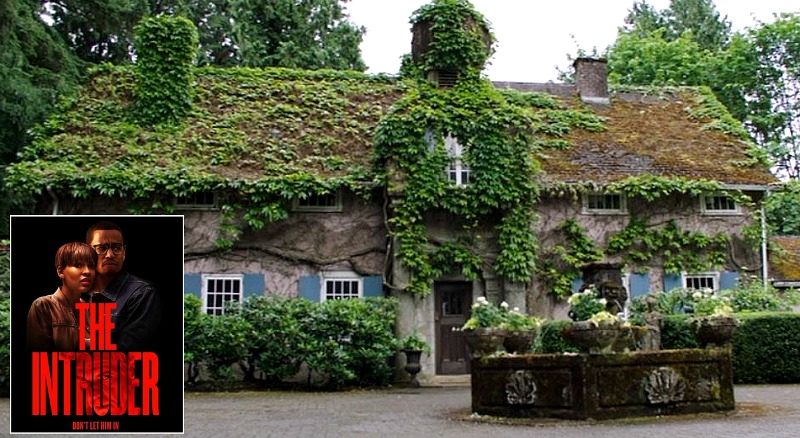 One of the most recent films, and one that took advantage of almost every room in the house and the property around it, was the 2019 thriller The Intruder.

Dennis Quaid plays a widower who sells the house to a young married couple (Michael Ealy and Meagan Good), but he isn’t quite ready to let it go.

The Intruder screenwriter David Loughery says, “This was an amazing house. Originally we were looking for something newer that Charlie might have built, but when we saw this place I think we kind of felt there was some magic there.”

Director Deon Taylor agrees, “All the magic! We drove all around Canada for the entire day. They said let’s go to one more location. We hadn’t found anything. Then we pulled into this location.” 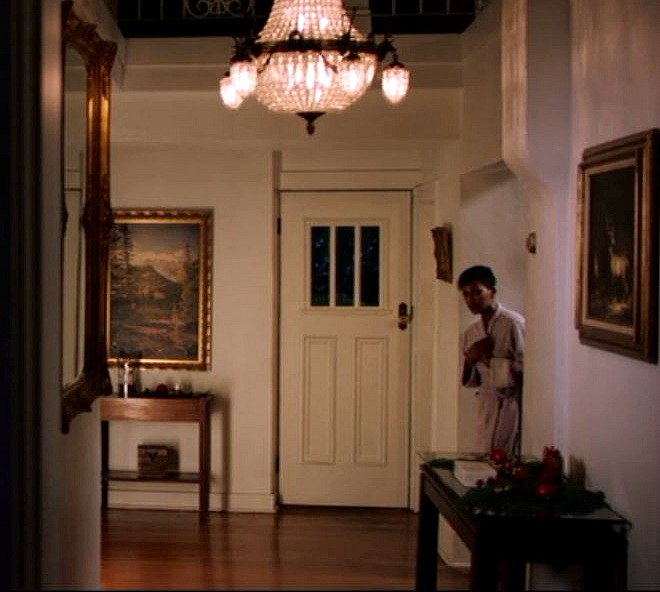 The Den with Fireplace:

This black-painted parlor with the fireplace had wallpaper in The Age of Adaline, but otherwise looks pretty much the same.

The director says this living room was one of the reasons they picked this house for the movie: “The structure, the bookshelves, the fact that it felt like somebody had been living there a long time. It was priceless. We used every corner of this house.”

They even used the tapestry on the wall of the living room as a pivotal plot point in the film. I’ve since noticed the same tapestry in other movies, so it must belong to the homeowners.

This bedroom looks pretty much the same in Age of Adaline with the yellow wallpaper, minus the four-poster bed they had in it.

“That really is the wallpaper in the house,” the director says in the DVD Commentary.

“We didn’t change much,” the producer Roxanne Avent adds.

Those arched openings in the kitchen makes it easy to spot in other movies.

The gorgeous green AGA range is another notable feature:

For The Intruder, the house was supposed to be in Napa Valley. Dennis Quaid also played a Napa Valley resident (and vineyard owner) in The Parent Trap (1998).

They didn’t change much for the movie. They even kept the name.

In one scene Charlie yells, “You don’t deserve Foxglove!” 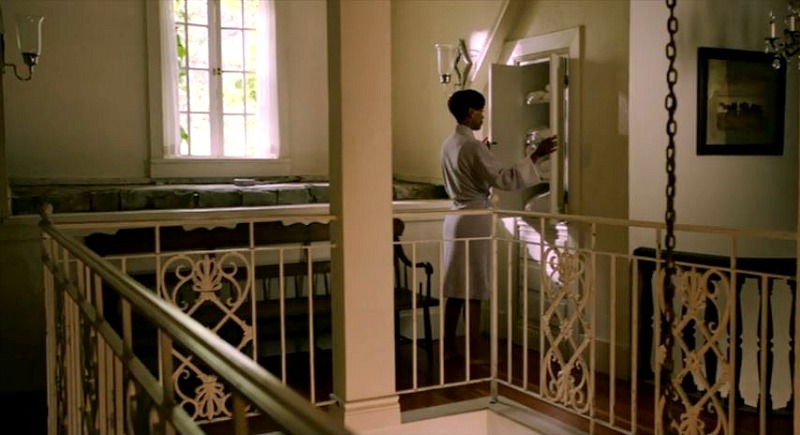 The Back of the House: 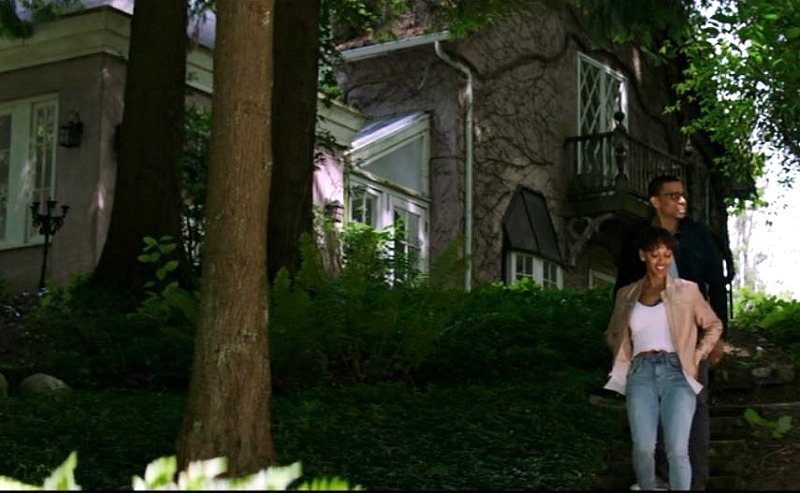 The director Deon Taylor says, “This was a real location, and I think editorially and cinematically this is what you fight for when you’re making a movie — a location that becomes a character in the film.” 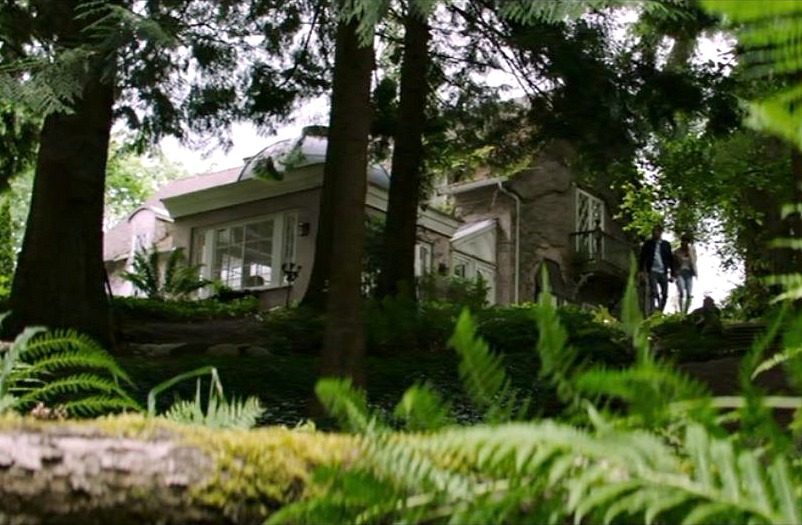 When Annie wanted to decorate the cottage for their first Christmas,

Dennis Quaid’s Charlie was a little too eager to help:

The Selma Blair Movie “In Their Skin” 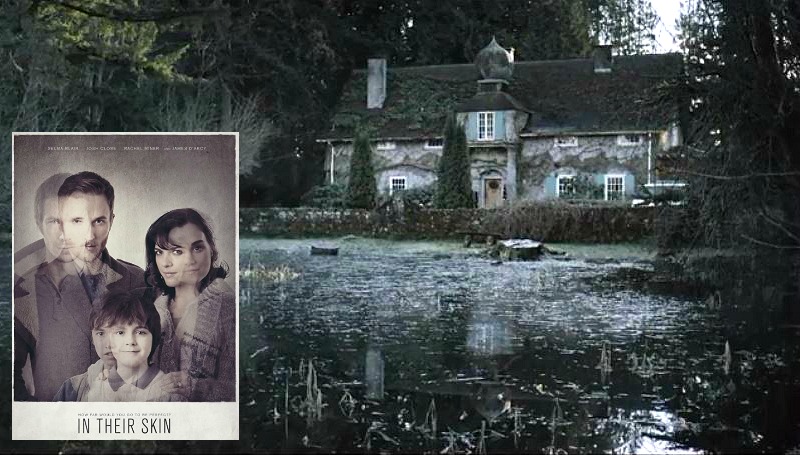 In the 2012 Selma Blair thriller “In Their Skin” the cottage had pale blue shutters.

They also filmed on location, using the recognizable white kitchen with brick arches: 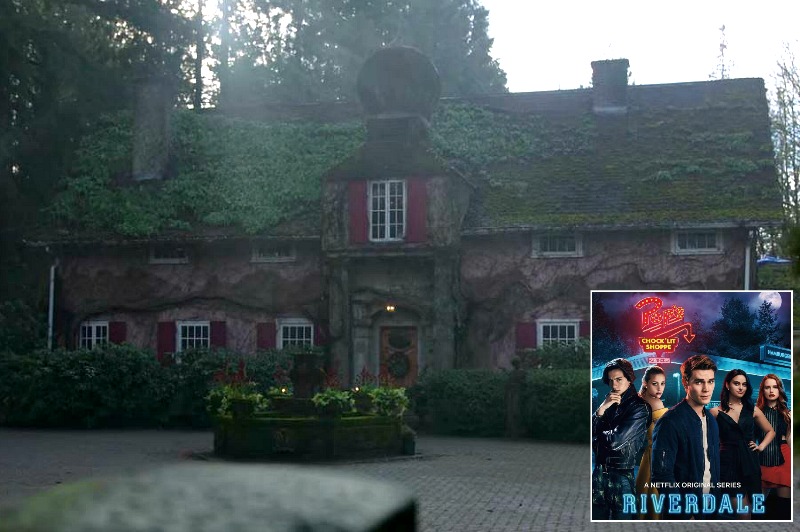 It’s foggy, and it has red shutters instead of blue, but Foxglove Cottage

is back there if you squint through the mist: 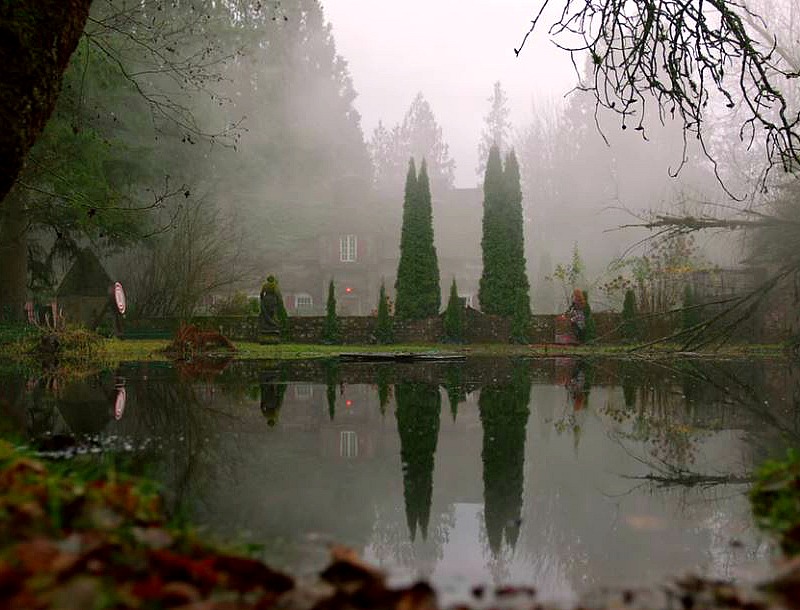 They used the real interiors for the show, as you can see in this shot taken

in the black-painted den (Season 2, Episode 15), but they added a red sofa: 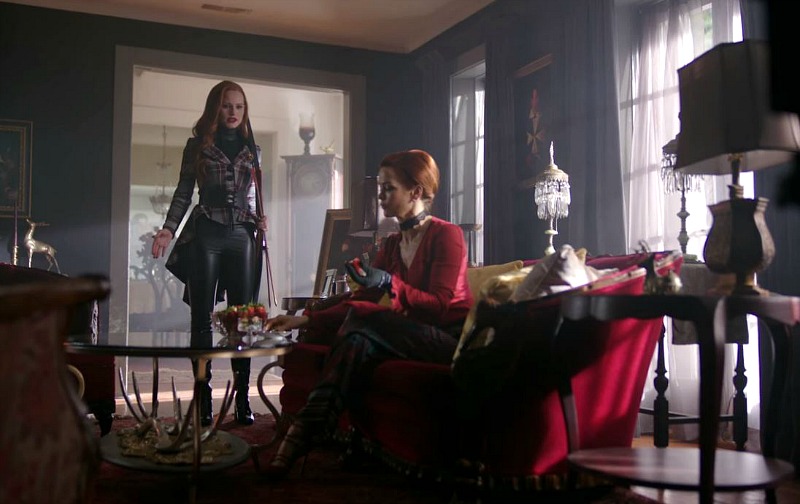 They also shot in the white living room with bookshelves, adding red accents to it, as well: 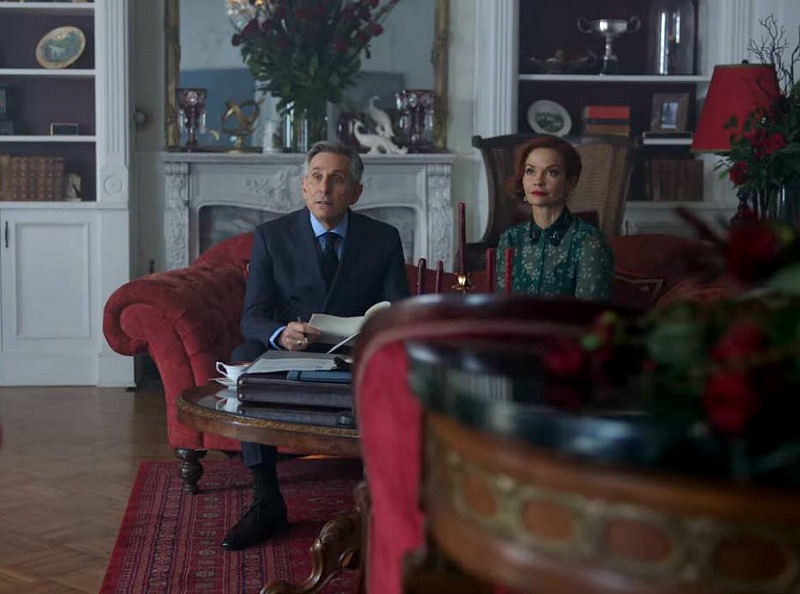 Foxglove Cottage in “Away” on Netflix 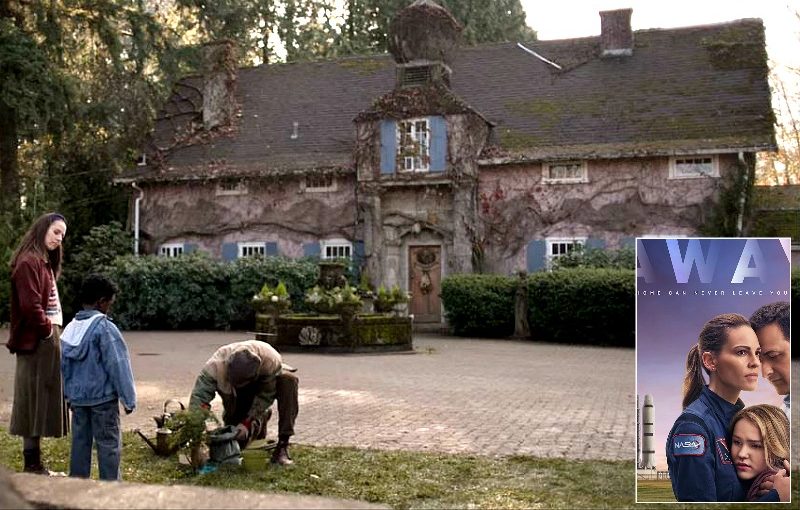 I did a double-take when the cottage popped up recently in the Netflix series “Away” (in the episode called “A Little Faith”) starring Hilary Swank.

In a flashback, we see a young Kwesi growing up in the cottage, where he learned to garden. 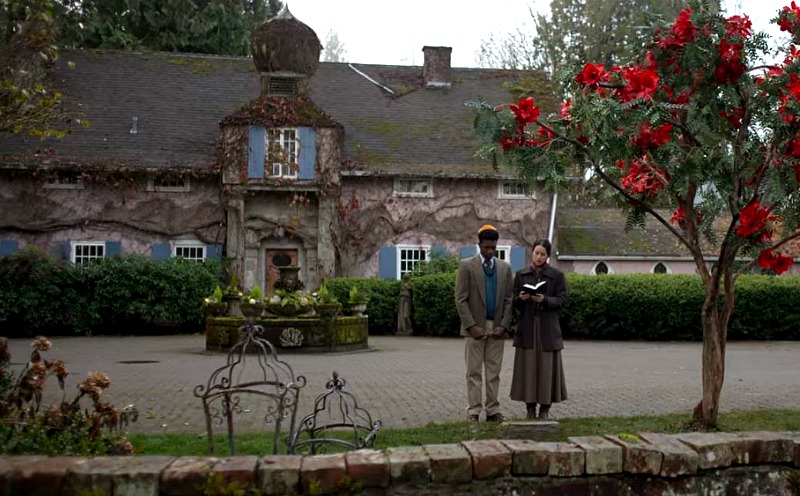 Some of the other TV shows the cottage has appeared in include: 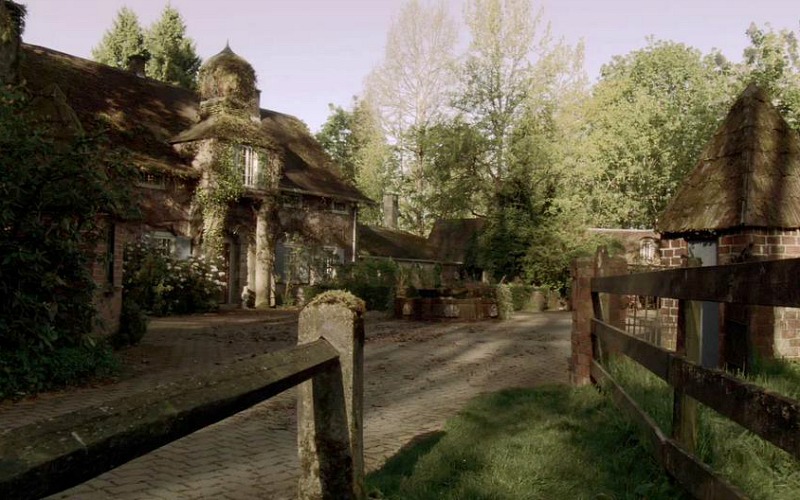 According to the listing description at the time:

A beautiful stable with office, wash stall and riding ring. Property has a charming gatehouse, atrium and enchanting gardens all on a private no thru road. A favourite location for the movie industry! 16.55 Acres of lovely pastoral farmland. 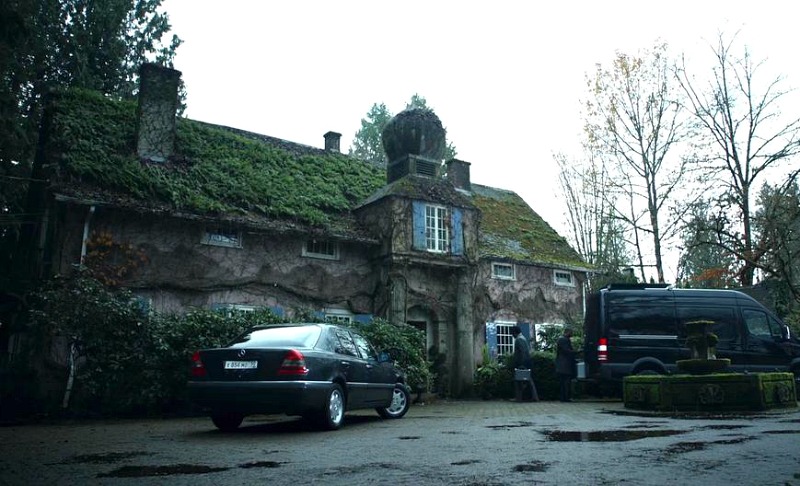 Thanks to Cecile for tracking down the location for me! You can see photos of the house in the 2013 listing and an article on Pricey Pads.

While researching this, I found an Imgur page discussing some of the shows this house has appeared in, and Movie Maps has an even more extensive list of productions, including an episode of “Arrow” (shown above).

Thanks to James who tells me you’ll find this cottage in Hallmark movies such as A Godwink Christmas and The Edge of the Garden, too!

including the cottage they built for The Holiday.