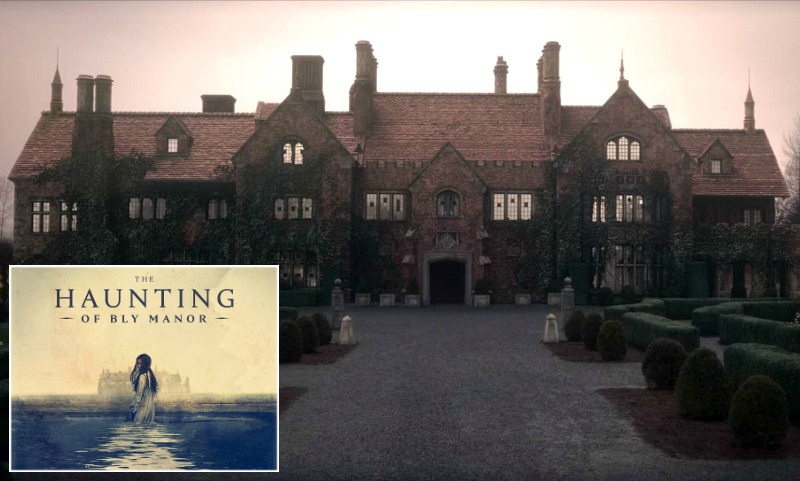 In “The Haunting of Bly Manor” we’re introduced to the troubled Wingrave family, their grand old house in the English countryside, and the ghosts that live with them in it.

The new au pair is in awe of the 17th-century estate when she first arrives and hopes it’ll be a safe place to escape the demons from her past. When young Flora gives her the tour, the eight-year-old dubs the house “perfectly splendid.” But Dani soon begins to suspect that things aren’t as perfect or as splendid as they first appeared.

And what’s up with the kids, who are all sweetness and light one minute, then locking her in a closet the next?

Bly Manor isn’t a real house in England. Most of the show was filmed on a soundstage in Vancouver. But the sets they created for it are beautifully creepy. Take a look!

“The Haunting of Bly Manor” on Netflix 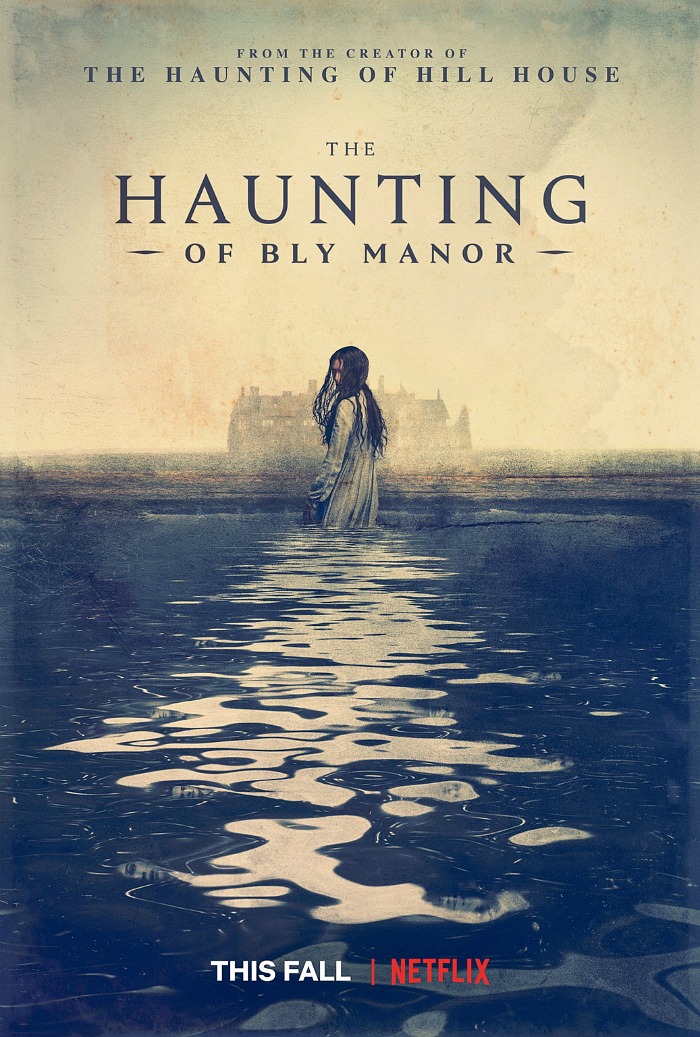 “The Haunting of Bly Manor” is the second season in Mike Flanagan’s anthology series for Netflix. It follows “The Haunting of Hill House,” which had many of us binge-watching episodes in 2018.

They’re similar, in that they both take place inside a mansion where the ghosts seem to outnumber the human residents at times. But the two seasons are standalone stories that aren’t connected.

Some of the actors from the first season also appear in this one, however.

Henry Thomas — Hugh Crain in the first installment — is their Uncle Henry here.

And actor Oliver Jackson-Cohen was cast as the handsome, smooth-talking valet Peter Quint in “Bly Manor” — a major departure from the troubled addict he portrayed in “Hill House.” 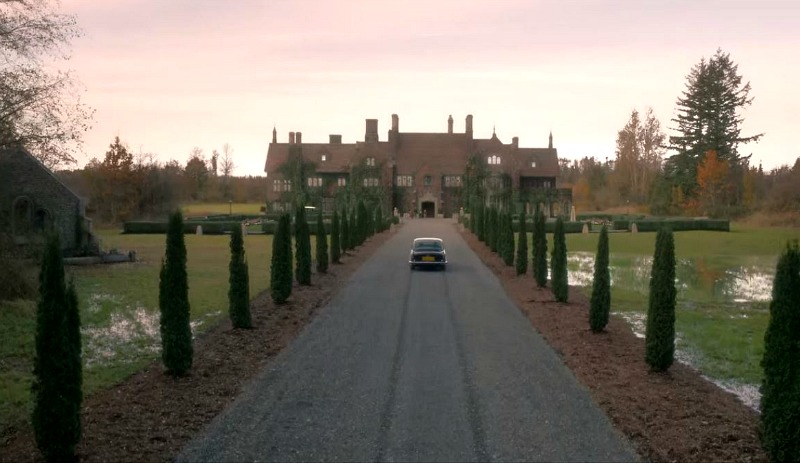 As we pull up the long, tree-lined drive in the first episode, Bly Manor and its gardens look like the setting for a fairytale. Dani can hardly believe her good luck, getting to move here from the depressing little room she’d been living in before to this ivy-covered country home.

She’s welcomed by the children she’ll be caring for, as well as Hannah the housekeeper (T’Nia Miller), Owen the cook (Rahul Kohli), and Jamie the groundskeeper (Amelia Eve). 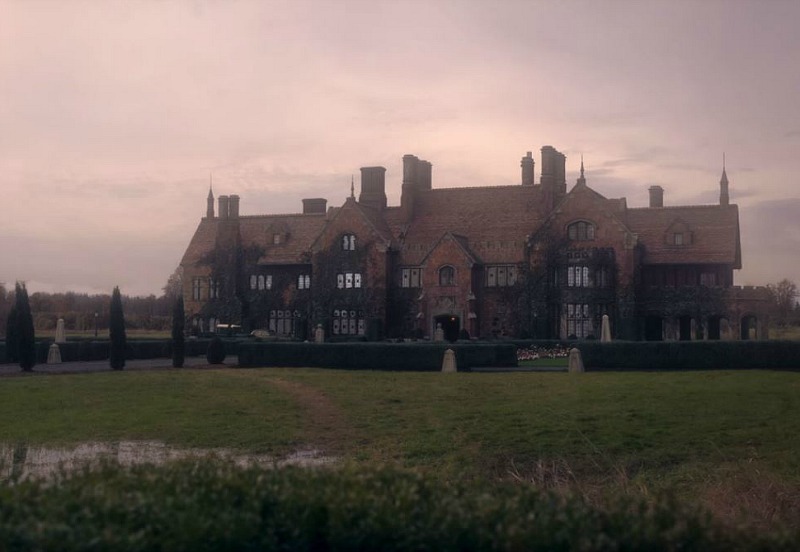 “The Haunting of Hill House” was partially filmed at a real house known as Bisham Manor in Georgia.

But “The Haunting of Bly Manor” — which takes place in England — was mostly filmed in Vancouver’s Bridge Studios. The interiors were sets created on soundstage. 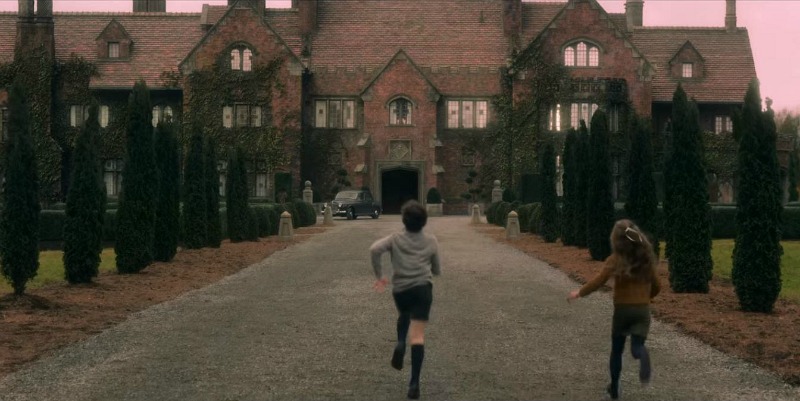 Rumor has it that they used Thornewood Castle in Lakewood, Washington, for some of the exterior scenes.

You can see on Google Streetview how similar it is to Bly Manor in the series. However, it’s not identical. For instance, the real house has a large fountain in front of the main entrance that we don’t see onscreen. The grounds around the house look nothing alike.

The producers aren’t telling how they created the manor. My guess is that the exterior was inspired by houses like Thornewood Castle but — like others we’ve seen in recent shows — probably had some false facades built for close-ups, while the rest of the house was created with CGI.

Update: Oliver Jackson-Cohen posted a photo on Instagram that shows what it looked like behind the scenes.

In the sixth photo of his IG slideshow, you can see the tree-lined lane above, but at the end of it there are blue screens where the house should be.

(Thanks to Jake for spotting this!) 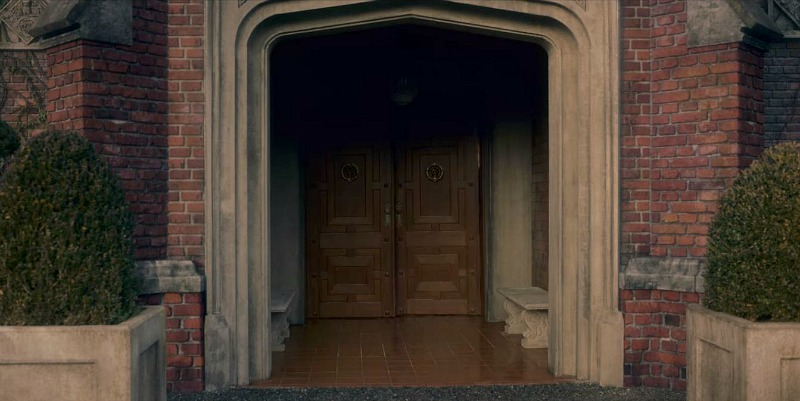 The first season of The Haunting series was based on a classic Shirley Jackson novel. But “The Haunting of Bly Manor” was inspired by The Turn of the Screw and other stories by Henry James. The story was updated to take place in the 1980s rather than the 1800s.

James is said to have based the haunted house on an estate in Hampshire, England, known as Hinton Ampner. The old Tudor mansion became famous in the 18th century after there were reports of poltergeists inhabiting it. The house was later torn down because no one was willing to live in it. 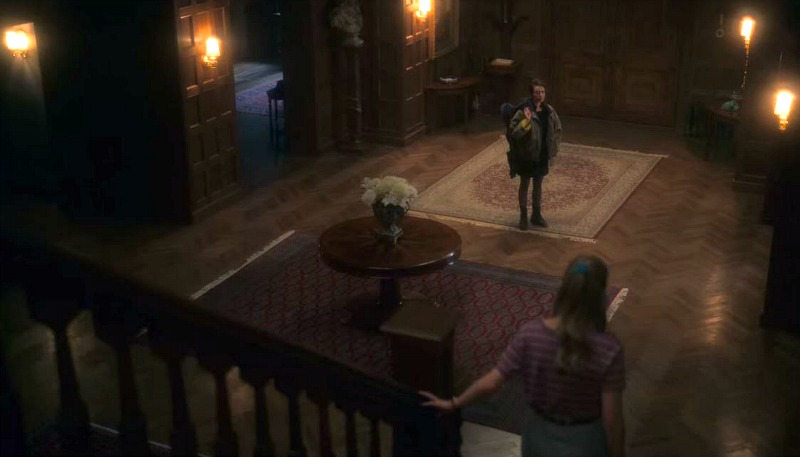 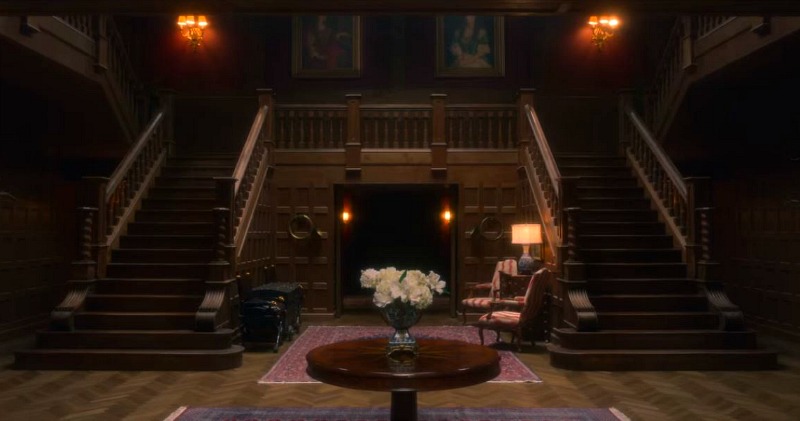 As with “Hill House,” Bly Manor often has ghostly figures hiding in the background.

Here’s one beside the stairwell when Flora is giving Dani the tour in Episode One: 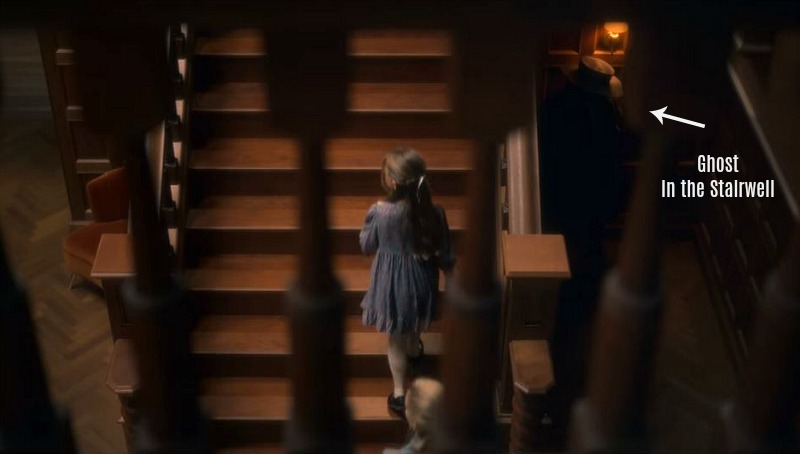 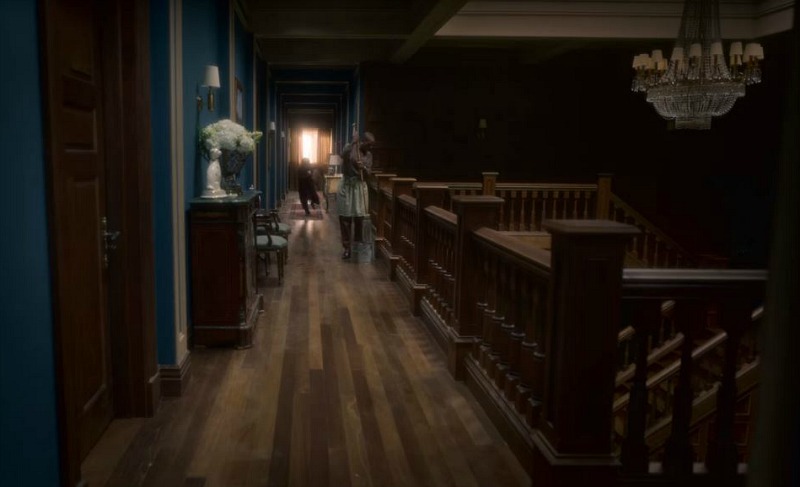 The “Quite Boring” Classroom: 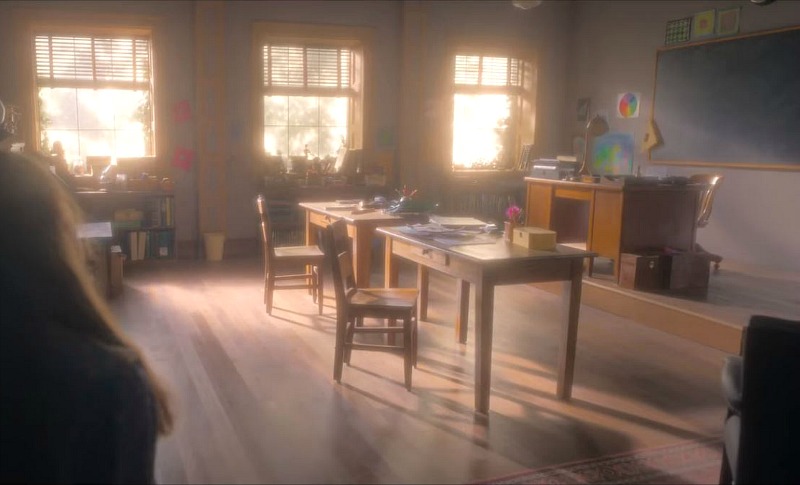 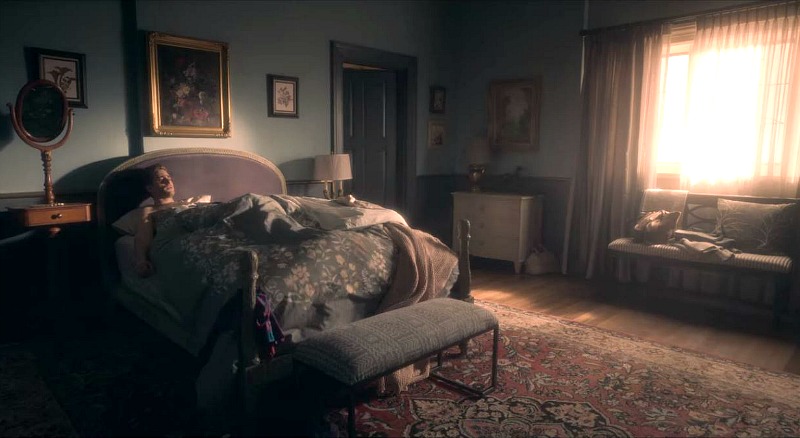 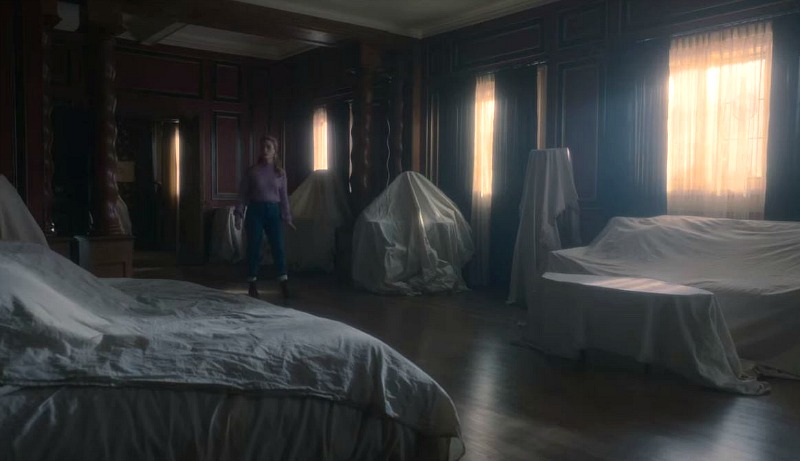 In a flashback we see how the parents’ wing looked before they died: 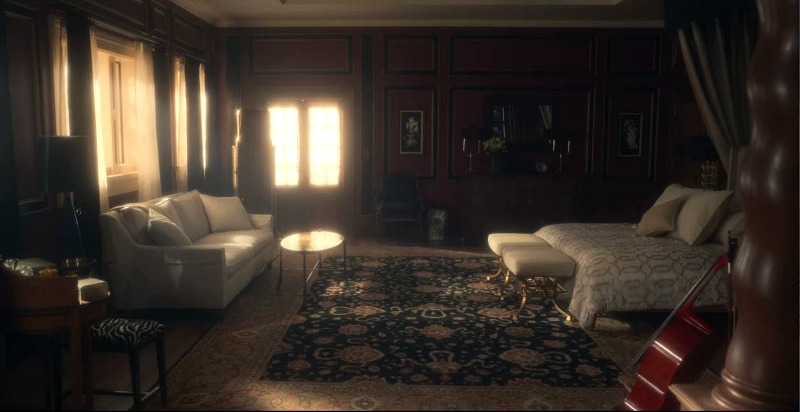 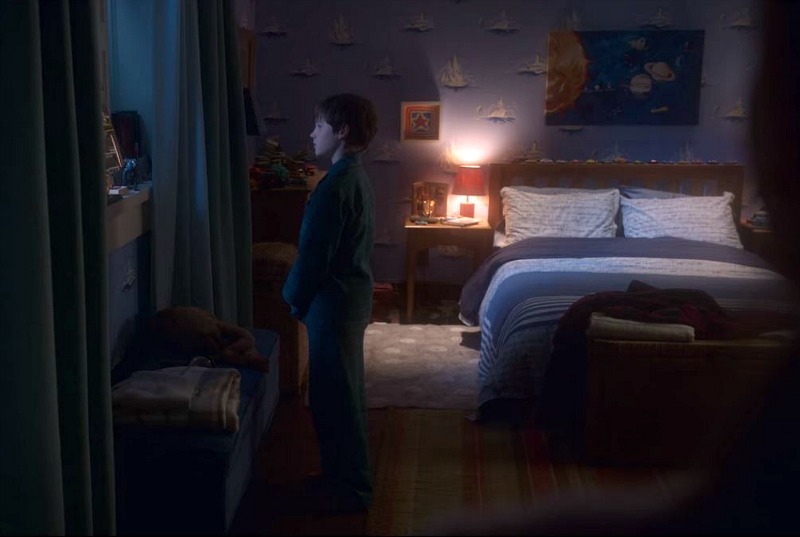 The ghostly figure of the plague doctor lurks behind Miles in the bathroom: 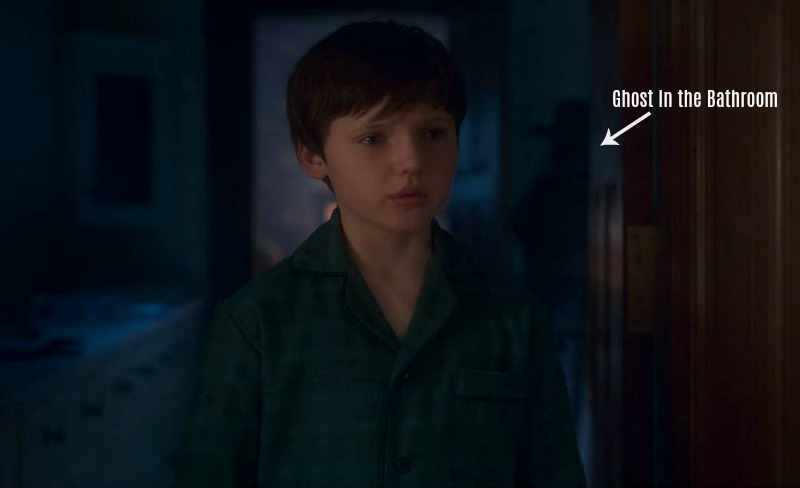 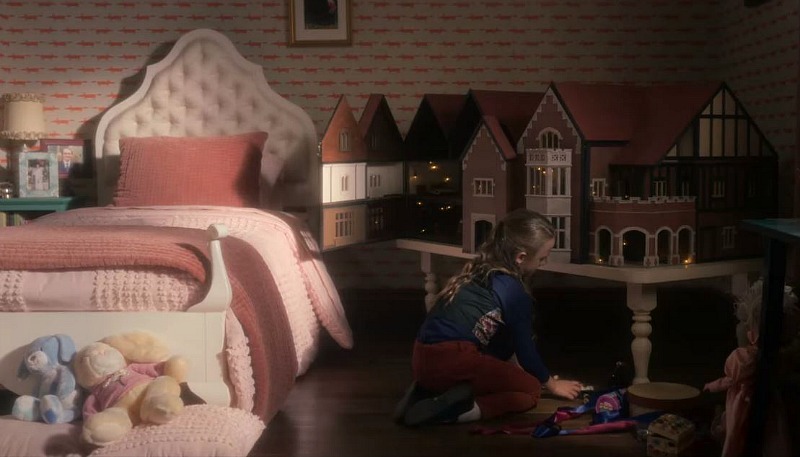 A lot of strange things happen inside it, just as they do inside the real house.

The Kitchen in Bly Manor: 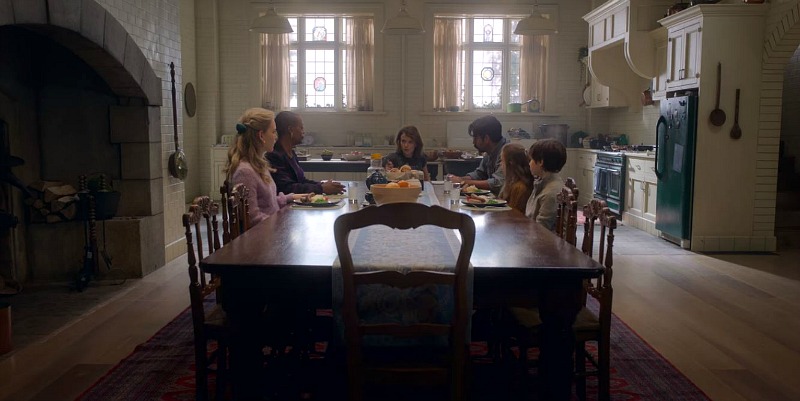 This kitchen with the huge open fireplace and long dining table is one of my favorite sets they designed for the series. 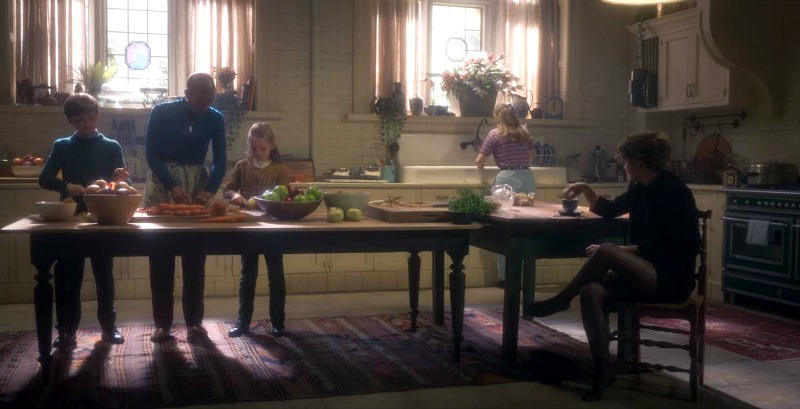 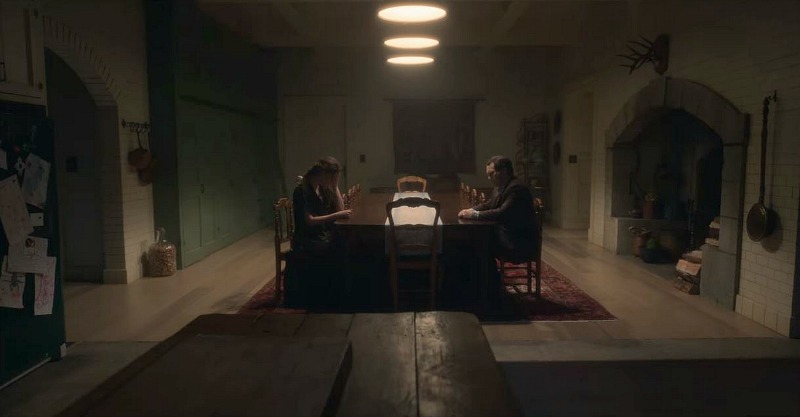 Ghosts even lurk in the corners of the kitchen at Bly Manor: 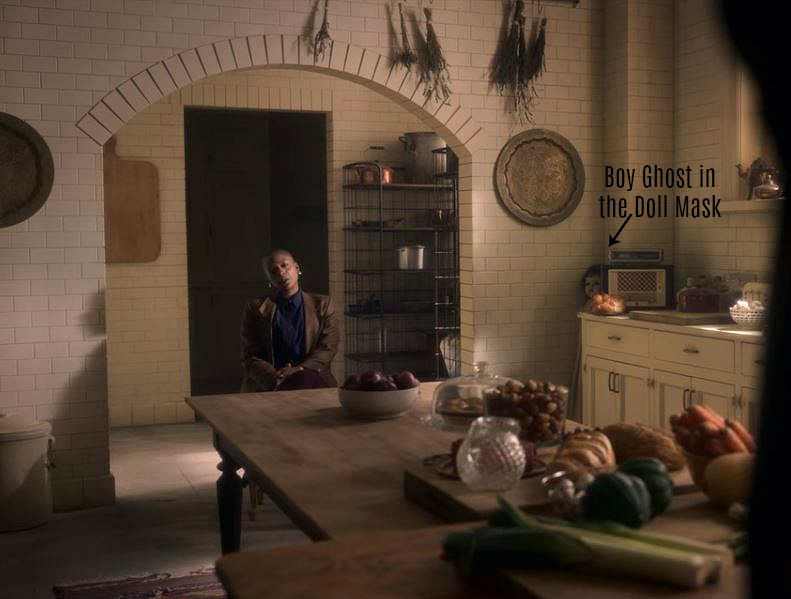 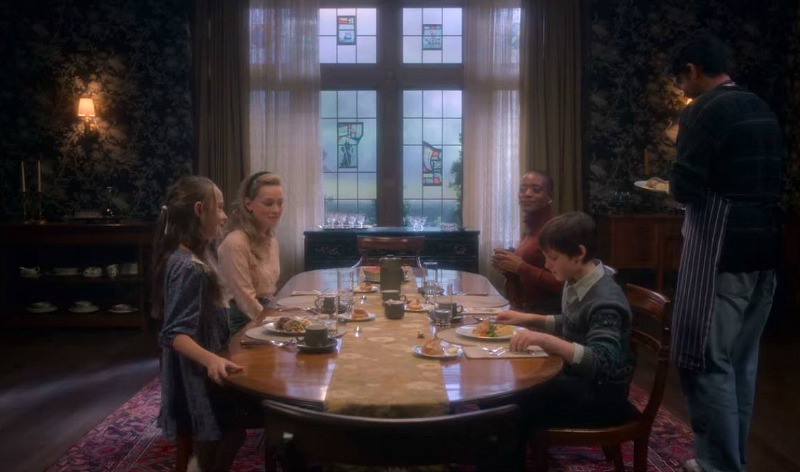 Siblings Flora and Miles Wingrave are played by 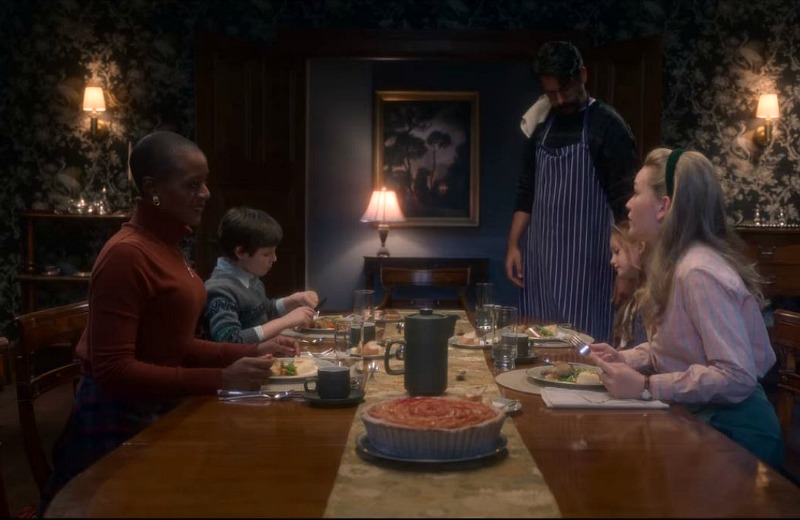 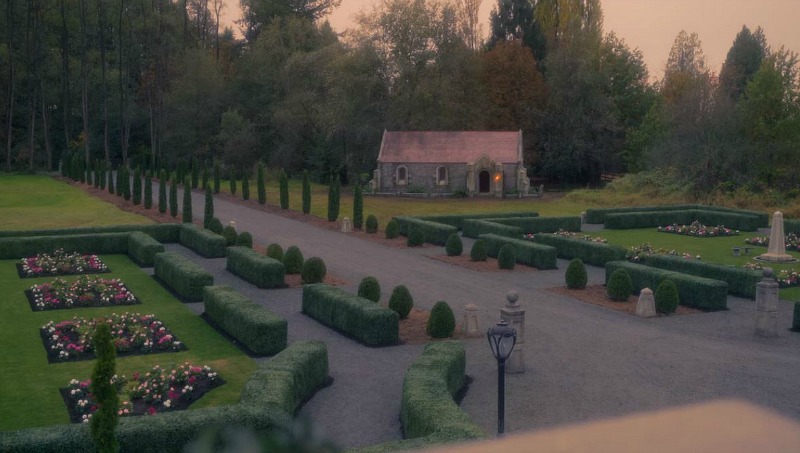 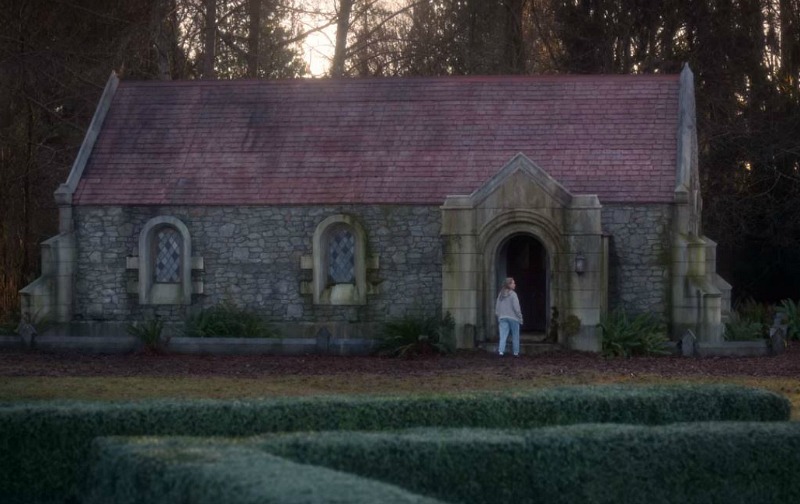 Housekeeper Hannah Grose can frequently be found lighting candles in the old chapel. 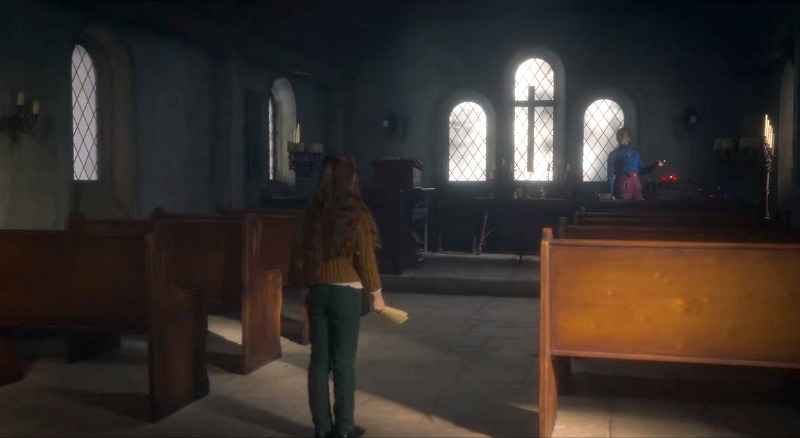 To promote the new season, Netflix created a (fake) Zillow listing for the estate:

Bly Manor is a perfectly splendid 17th-century home in the English Countryside. The Manor is currently inhabited by the remaining members of the Wingrave family and their staff, who welcome guests of all ages and backgrounds to stay as long as they’d like.

While the Manor has changed familial hands throughout history, markings of its previous residents can be found all over the estate.

Enter through hand-carved doors. As you cross the threshold, you’ll be greeted by portraits and artifacts that are as old as the manor itself.

On the ground floor, you’ll find a spacious kitchen, a study for business, a classroom for perfectly splendid children & more.

As you ascend the staircase to the 2nd floor, you’ll find two children’s bedrooms, complete with ample closet space, and a spare room for an au pair or other guests. The master wing is off limits.

You may also choose to view our antique doll collection in the basement, or use our attic to store your most prized possessions. 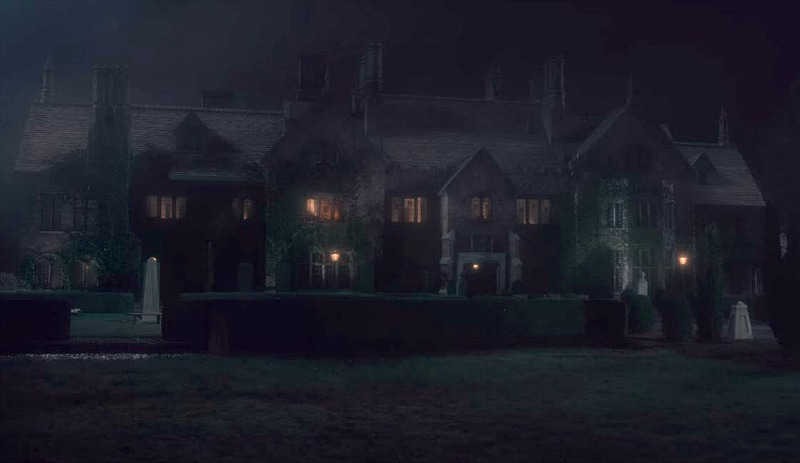 As you make your way up the drive, notice the ivy crawling the length of the manor and the parapets for overlooking the estate. We pride ourselves on our immaculately kept grounds that float free of time. Please see the rose bushes, as they are a labor of love.

Roaming the grounds, you will also find a chapel, an antique well-pump, a lively statuary, a greenhouse, and more. The lake, while not for swimming, is perfect for moonlit walks. 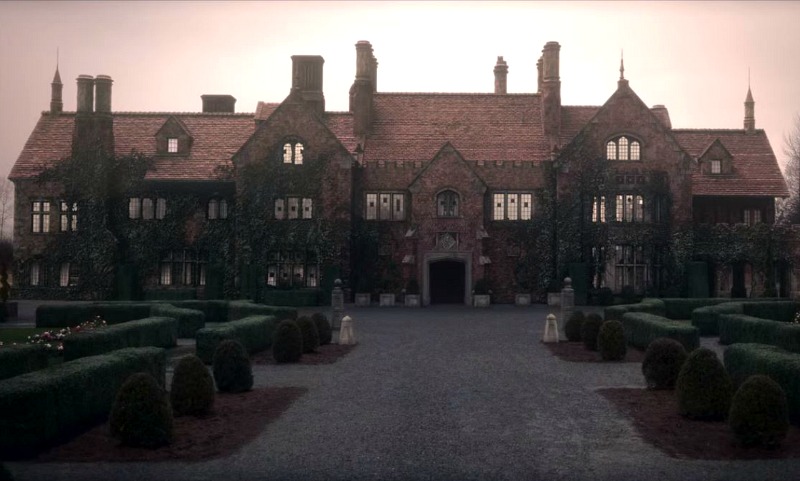 After watching “Bly Manor,” I went back and watched “Hill House” again. So good.

You can read about the house from the first season here. 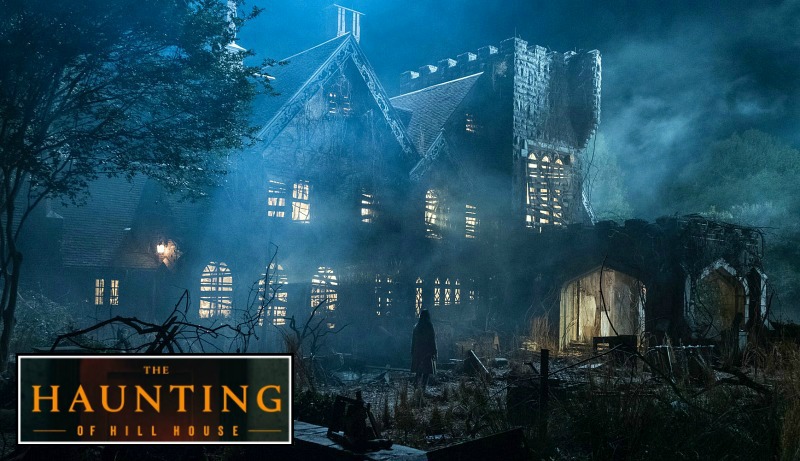 BTW, the manor from “Hill House” was recently used for the HBO show

“Lovecraft Country,” and you can see how they changed the exterior for it here.

I took these screenshots while watching “The Haunting of Bly Manor” on Netflix.

For more information about the house, check the clever Zillow listing they created for the fictional estate (love it). The Tab lists more of the ghosts hiding in the background throughout the series in case you missed some of them like I did!

like the houses from Locke & Key, Knives Out, and Jumanji.

Previous Post
“Hocus Pocus:” The Witches’ House and Other Filming Locations
Next Post
Nicole Kidman’s Beach House in “The Undoing” on HBO