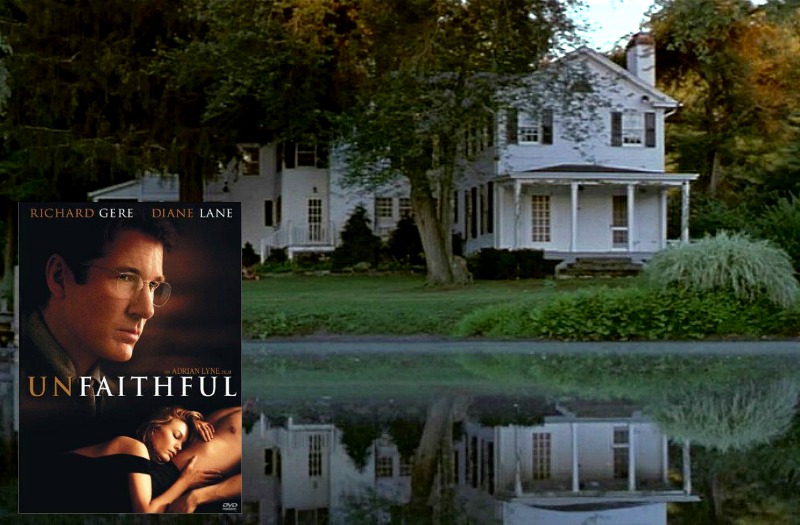 In the 2002 drama Unfaithful, Richard Gere and Diane Lane played a couple whose marriage was tested by her infidelity (*understatement*), and much of the drama played out inside this classic white house with green shutters. Thanks to this movie, I never looked at snow globes the same way again…

The large Colonial farmhouse, which was built in the early 1800s, is on the market in White Plains, New York.

Let’s take a look back at the house where they filmed Unfaithful on location, both inside and outside the house.

The House from the Movie “Unfaithful” 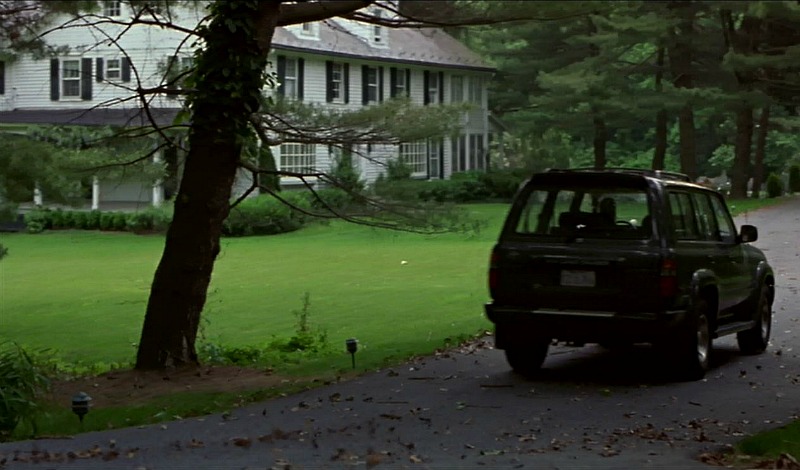 This was Edward and Connie Sumner’s house in the movie. 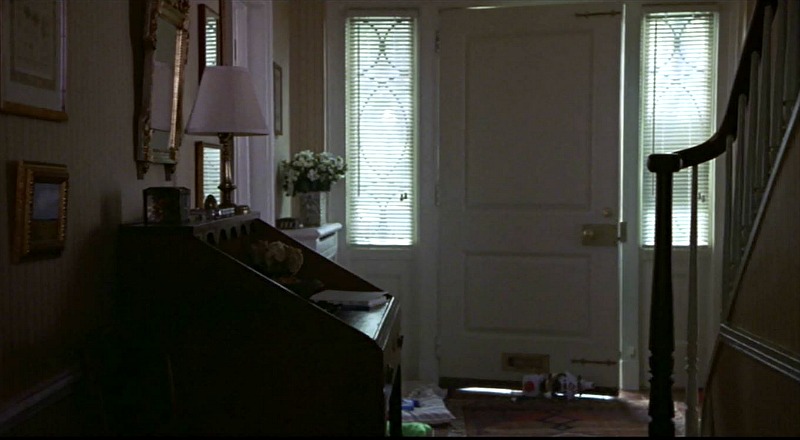 The couple kept their snow globe collection in the living room window: 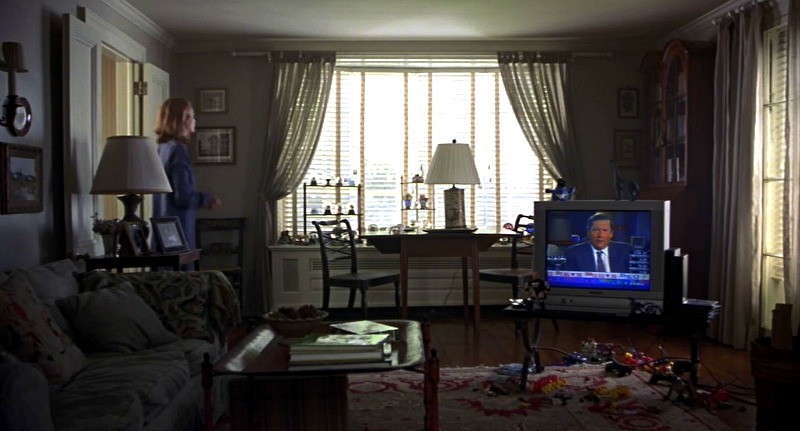 Production designer Brian Morris made the kitchen look like the lived-in hub of this family’s home: 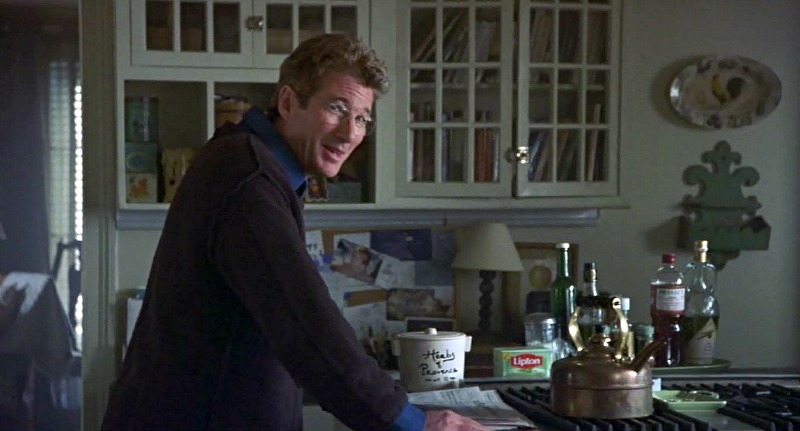 They had a table and chairs in the center of the kitchen: 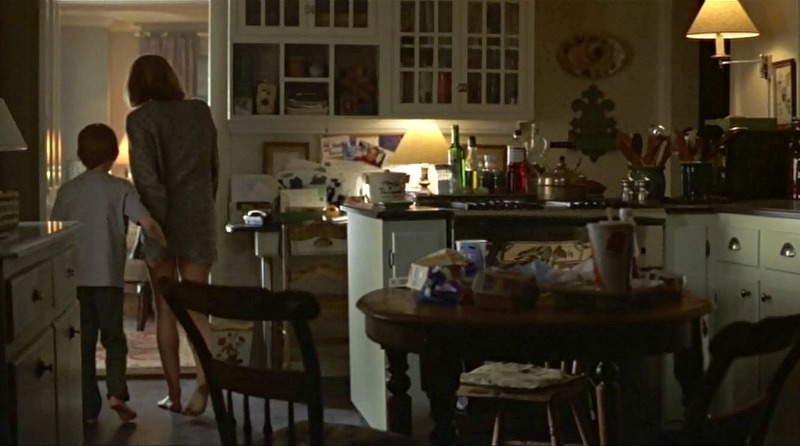 Unfaithful was a (loose) remake of the 1969 French film La Femme Infidèle, or The Unfaithful Wife. 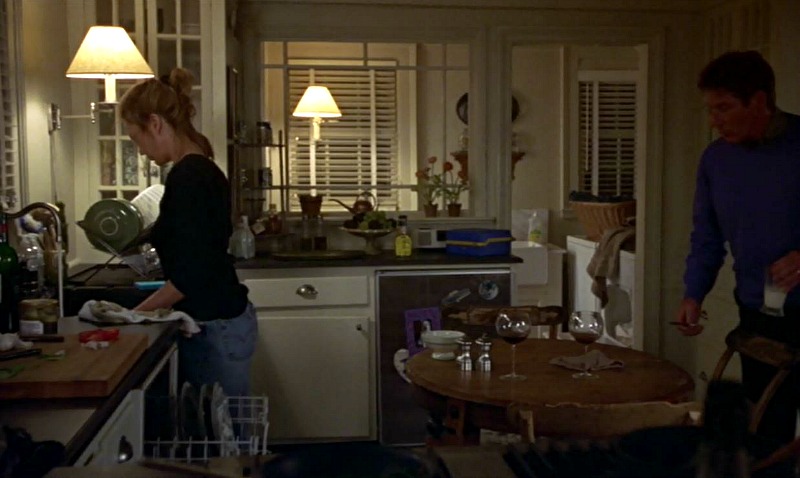 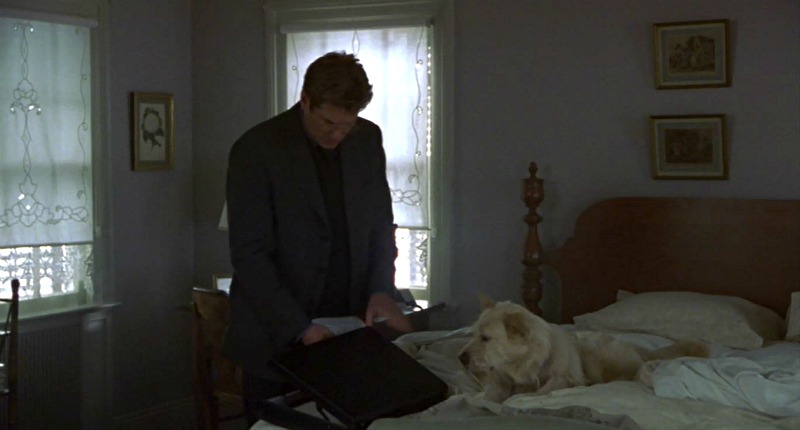 The bathroom in the movie had a freestanding tub: 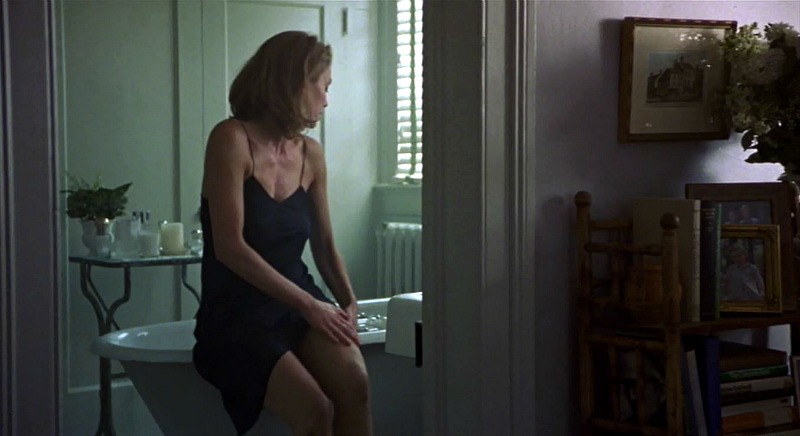 You can see the floor plans for the house in the listing. 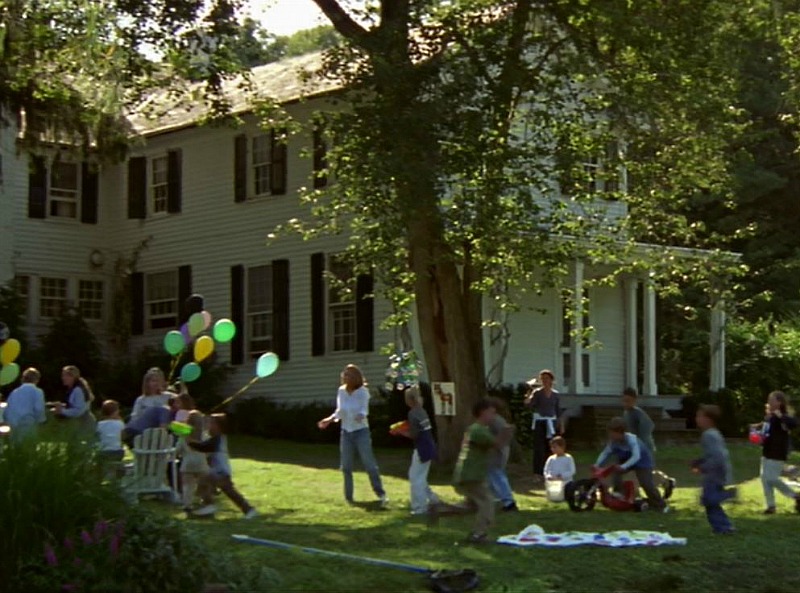 Adrian Lyne, who directed Unfaithful, says he filmed Edward (Richard Gere) walking into the police station to turn himself in. Lyne later decided to edit that out and leave the ending ambiguous.

You can watch the original scene in the deleted scene on the DVD. 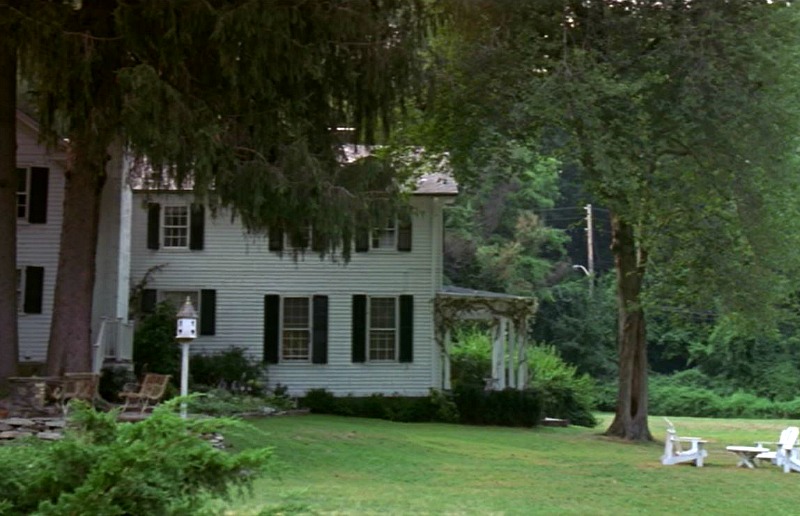 The listing for the Unfaithful house says:

Enchanting, historic, gracious and transcendent describes the 4 acres of manicured property on which sits an elegant, and lovingly maintained, 4,210 square foot Farmhouse Colonial with 5 bedrooms and 5 fireplaces, overlooking a pond for blue herons and other stunning bird life, an in-ground pool, and a heated, recreation house with full bath.

Dating back to before 1817, this home, once owned by a nephew of Mary Todd Lincoln and chosen for the movie Unfaithful in 2001 starring Richard Gere, endures appeal across centuries. Behold the period built-ins, wide plank floors and light filled rooms from oversized windows.

Take note of the large fireplaces, generous cook’s kitchen, and rocking chair porches with clear views of this sprawling and tranquil property. An extraordinary experience in the middle of Westchester County! Recreation house used to prepare for international table tennis competitions. Can be converted back to 2 car garage and pool cabana. 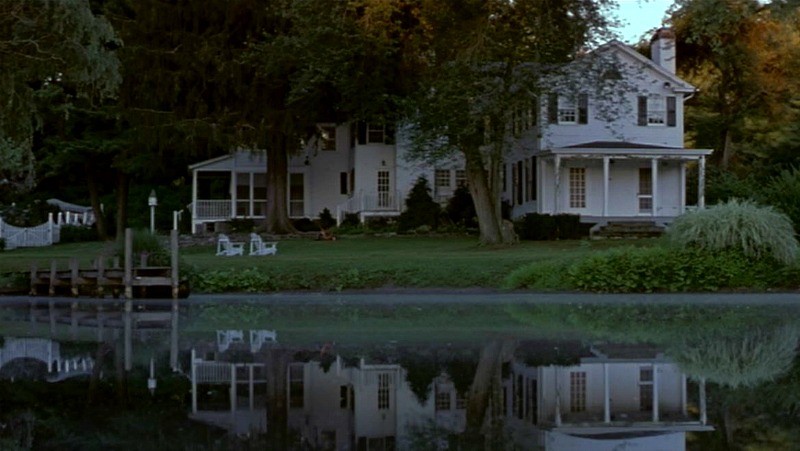 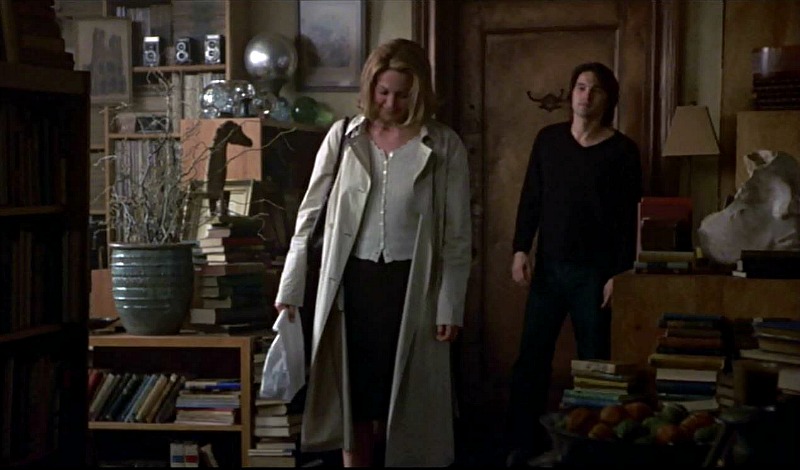 I can’t resist taking a look at the loft Olivier Martinez’s character lived in while we’re at it.

In real life it had belonged to a sculptor, and some of his work can be seen in the film. 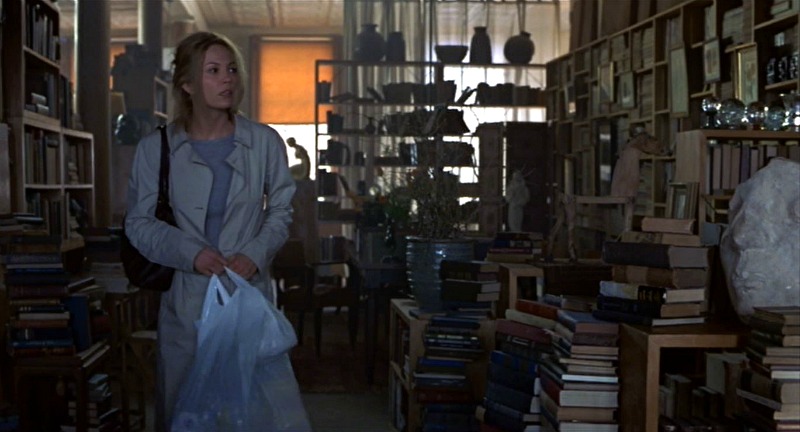 Director Adrian Lyne said the artist had been dead for nearly a decade when they filmed here.

His daughter had left the space exactly the way it had been when he was alive, down to the toothpaste in the bathroom. 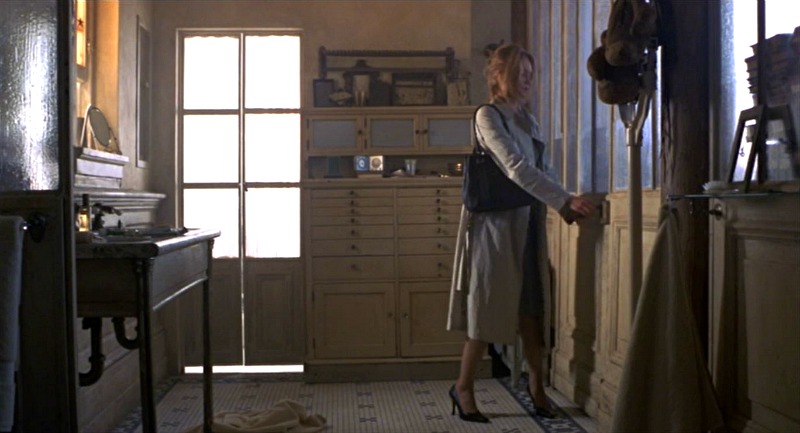 Actors like Brad Pitt had been considered for the role of Connie’s lover, but after Olivier Martinez

auditioned, they decided to make the character French. 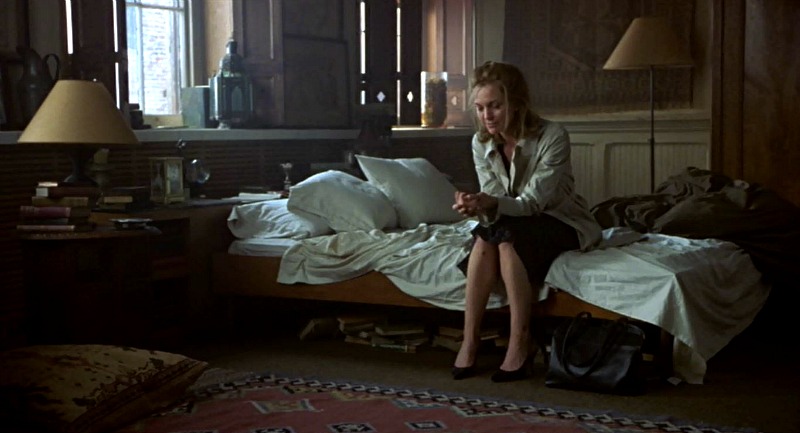 For photos and information about the “Unfaithful” movie house at 250 Rosedale in White Plains,

check the listing at Houlihan Lawrence, co-listed by Deborah Glasser and Miriam Lipton.

Previous Post
“Twilight:” Bella Swan’s House Is For Sale in Oregon
Next Post
“The Holiday:” The California House from the Movie