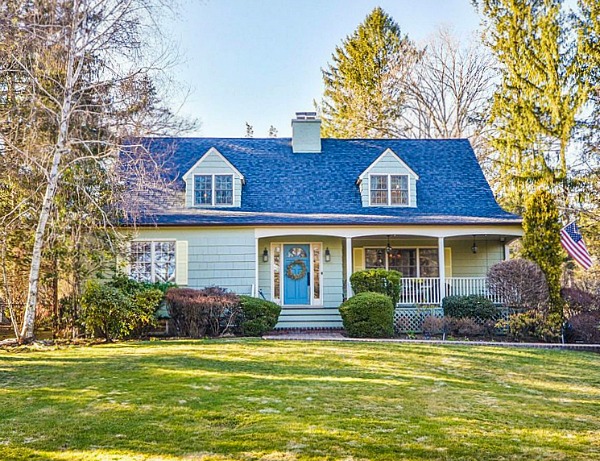 She’s an “antiquing fanatic” who wanted to make it look like it belonged to a simpler time.

Now she’s selling her charming Farmhouse Colonial in New York and offered to show us around the rest of her home. 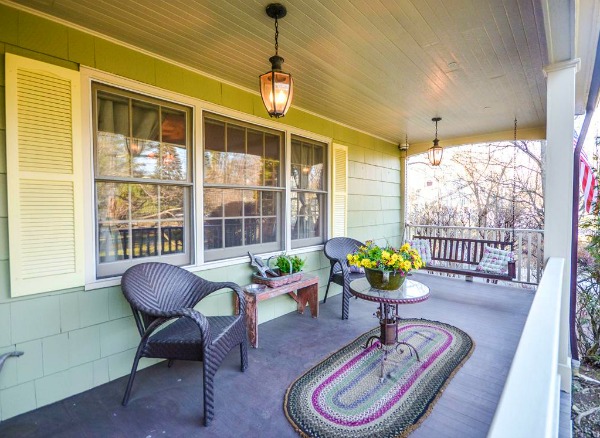 The listing describes the house, which was built in 1940, as a “Stunning Farmhouse Colonial in the heart of the Hillandale area of Rye Brook situated on .69 acres.” 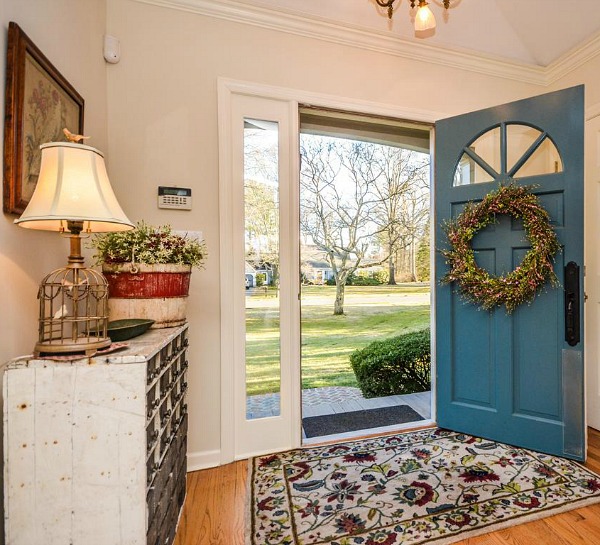 It’s bigger than it looks from the outside, with about 3,700 square feet. 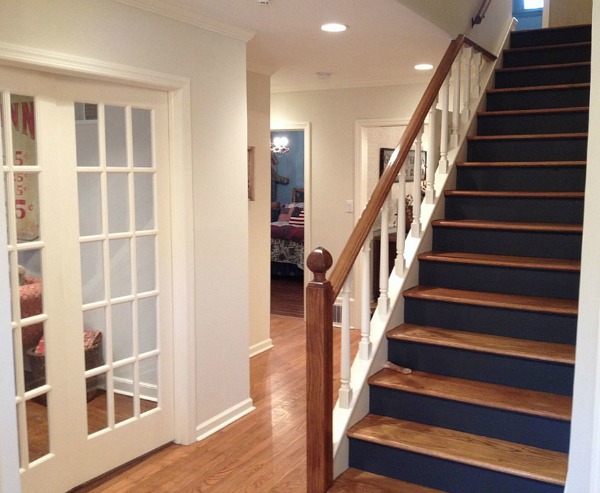 I also wrote a post about her dining room makeover that you may remember.

When they moved in, it was a dark paneled den: 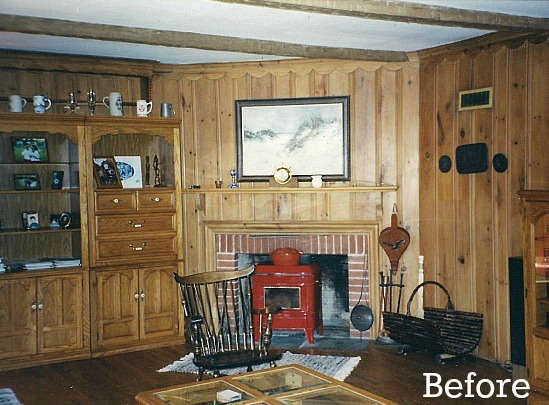 And this is how it looked after Renita redecorated it: 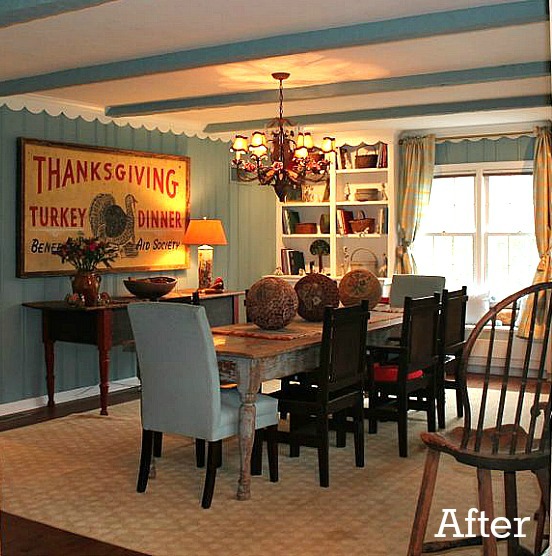 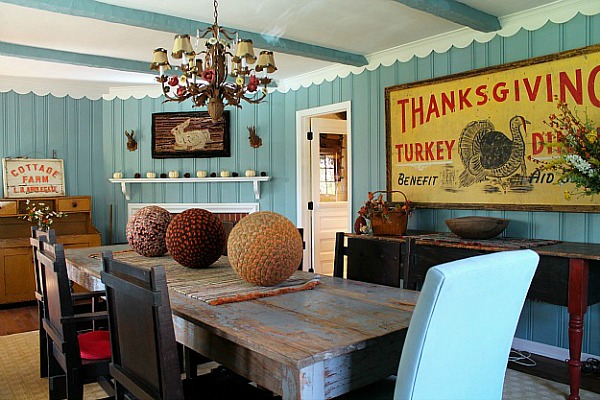 Renita tells me they took some things down and “neutralized” some of the rooms a bit to appeal to a broader range of buyers.

One of the changes I noticed was that the dining room is now white instead of blue. Here’s how it looks in the listing: 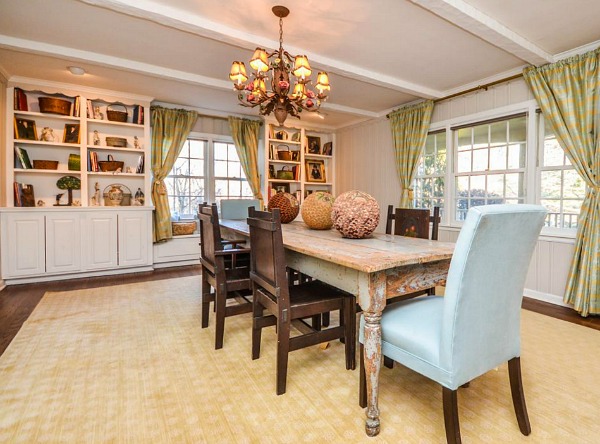 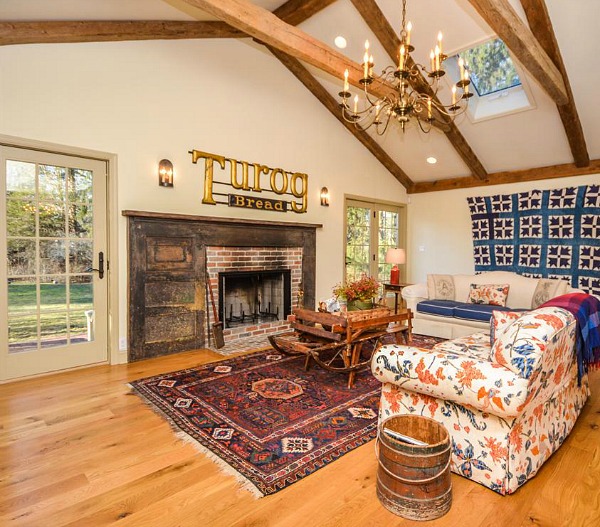 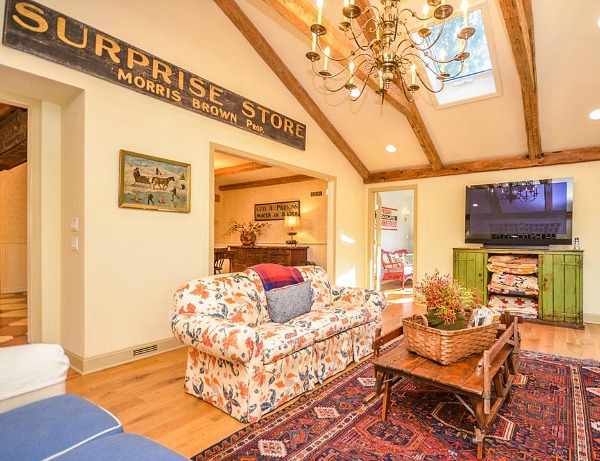 The sunroom is a newer addition to the back of the house.

Looks like a great spot to sit and enjoy the views of the big backyard: 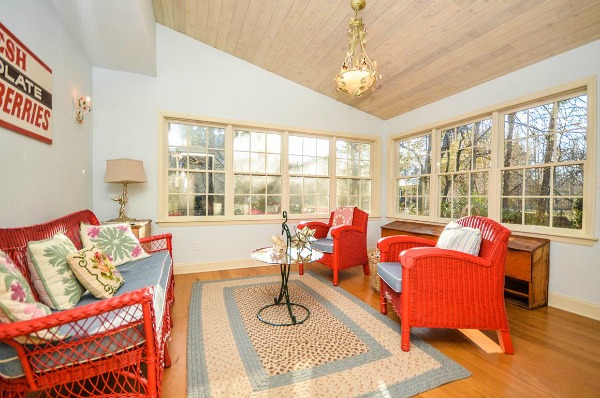 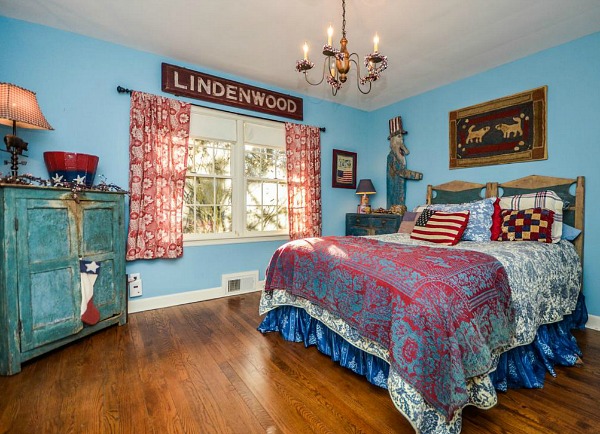 Her pup looks pretty happy to be hanging out in the bedroom by the fire: 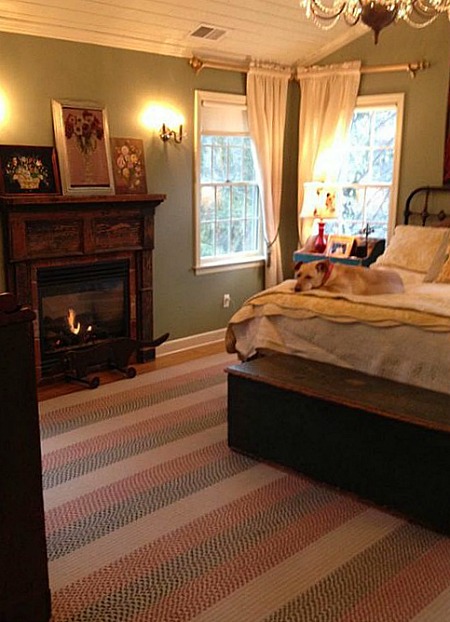 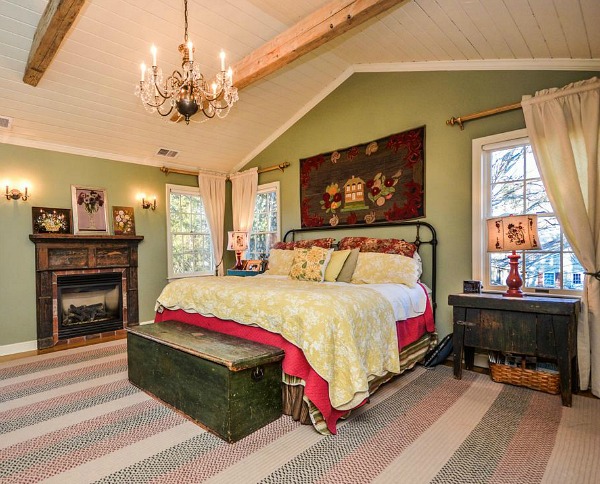 She used an old piece of furniture to create a double-sink vanity for this one: 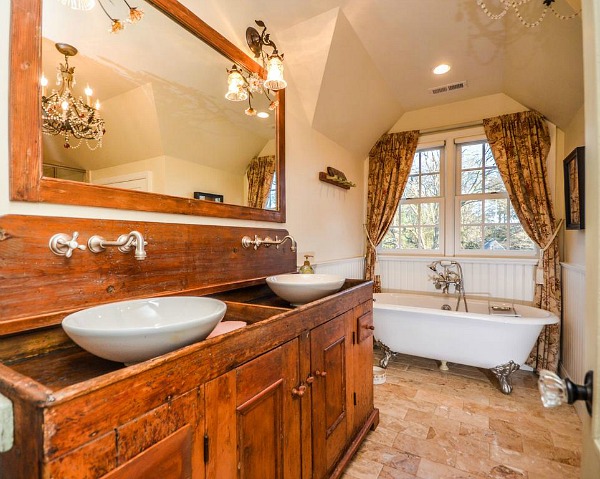 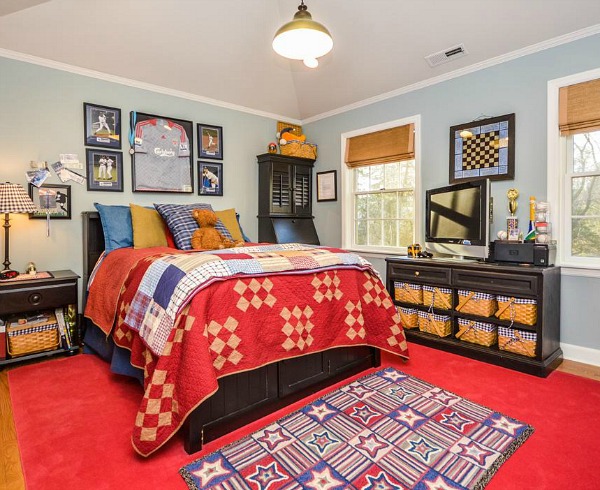 Here’s how her “award-winning kitchen” looked when they bought the house: 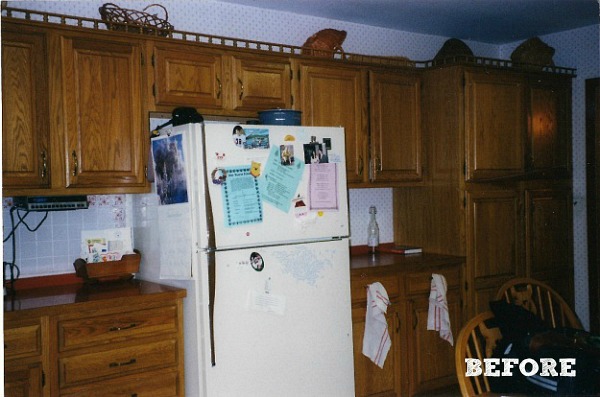 It’s come a long way since then. Here’s how it looks now: 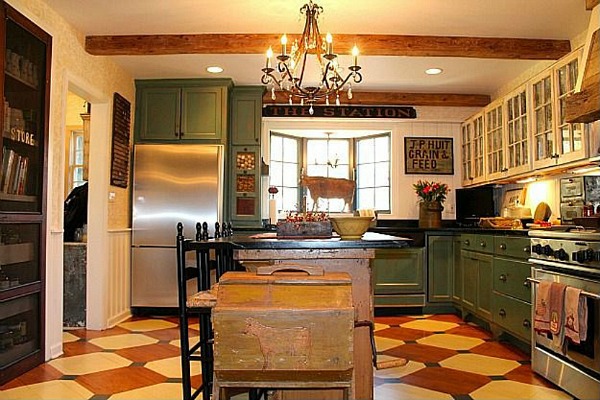 Renita says that although she wanted the room to make you feel like you stepped back in time, “It still has all the modern conveniences–a commercial-style range, microwave (hidden behind the “General Store” pantry doors on the left), and a dishwasher hidden behind a green panel next to the sink.” She distressed the upper cabinets herself,

which are actually old windows scored at a salvage place for $50.00. 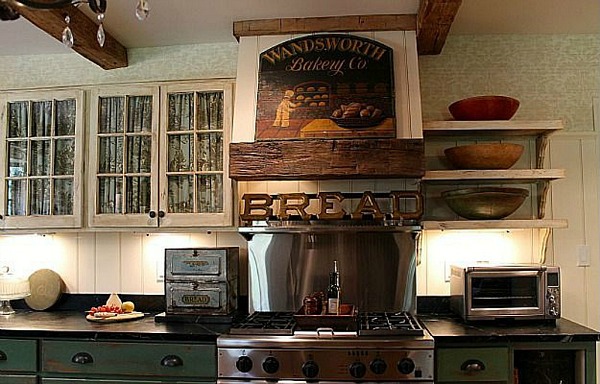 She’s taking these old General Store doors with her to the next house — and who could blame her?

She found them at an antiques show in Nashville and repurposed them as pantry doors: 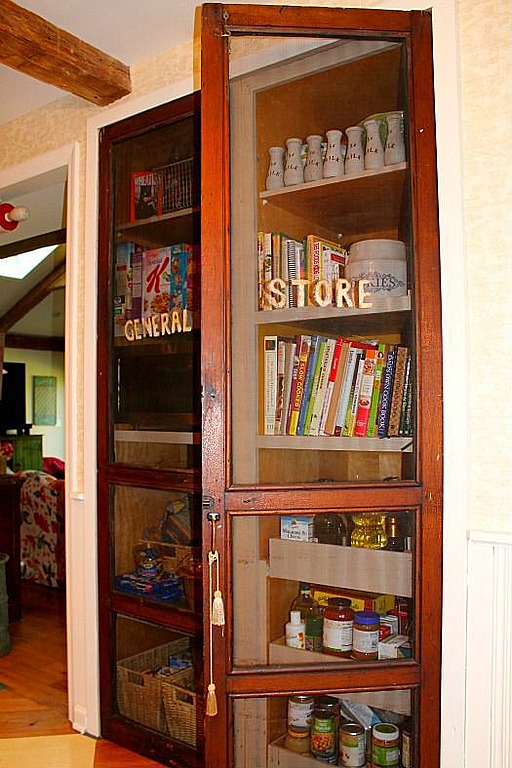 “We used an old general store counter for our island, topped with soapstone (which I also used on the countertops).” 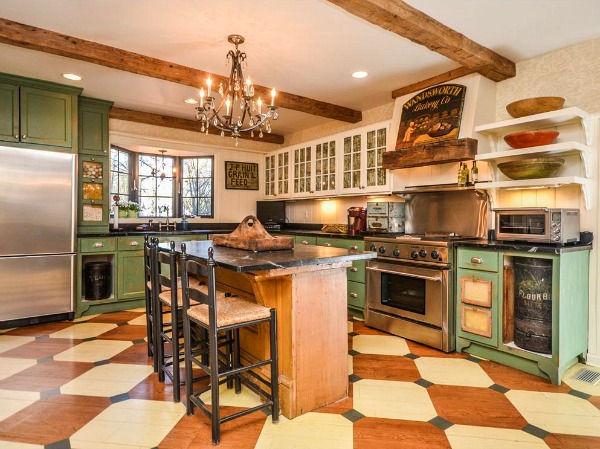 Here’s how the original dining room looked when they moved in: 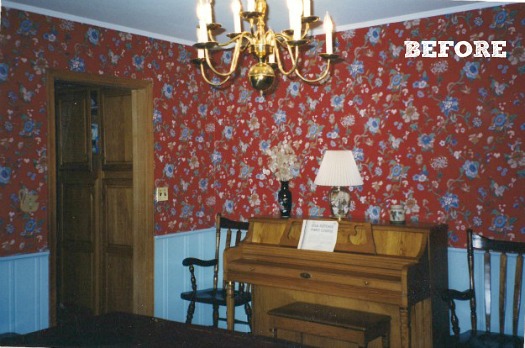 They opened the wall between it and the kitchen to create one large space.

Reclaimed beams were used for the ceiling and to frame the opening between the rooms: 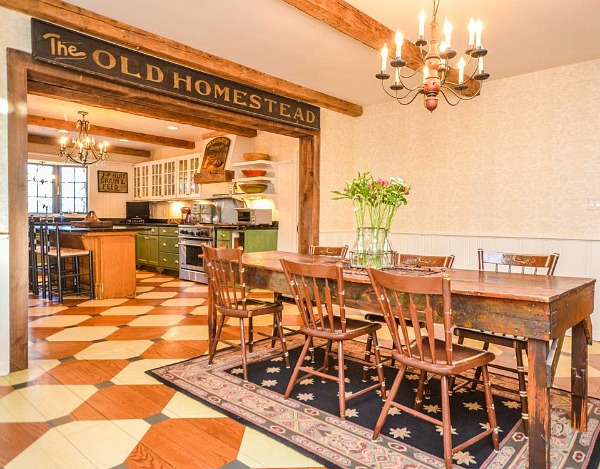 The floors put it over the top for me.

She says the two rooms had different types of hardwood, and after they opened them up to each other in the renovation, they didn’t match.

Painting this bold pattern was her solution to make them work together. Genius. 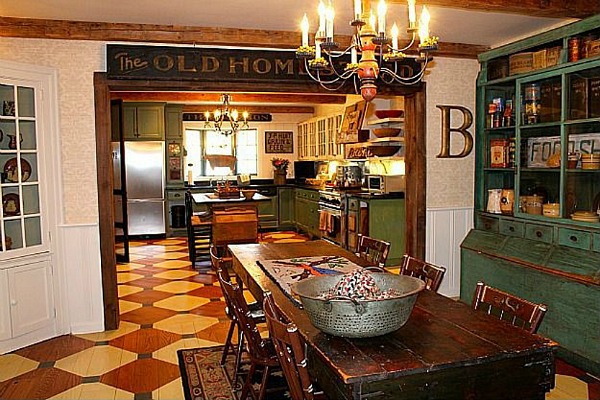 Some of these photos are ones she sent me before it went on the market and some are from the listing.

They already moved a few things to their new house (which I’m hoping to see someday, too!). 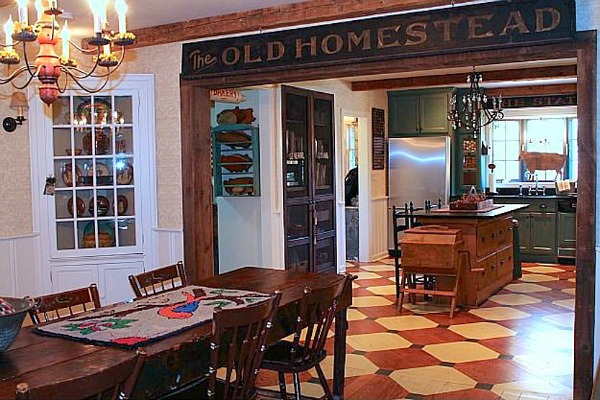 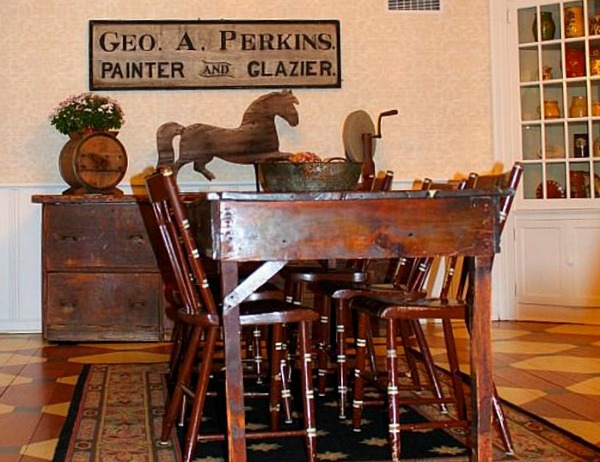 If you have any questions about the kitchen, she answered a lot of them in the comments of the original post I wrote about it: Renita’s New Kitchen Goes Back in Time. 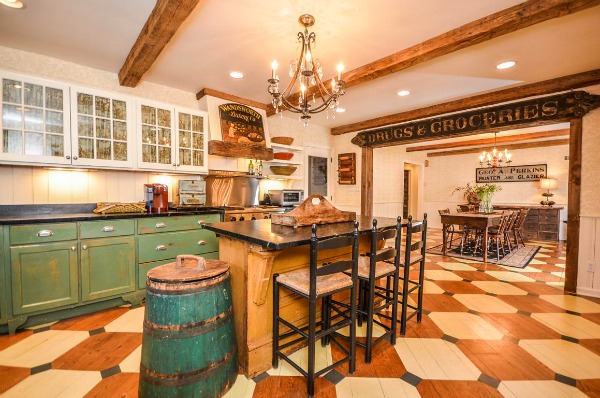 Thanks to Renita for sharing her home with us!

For more photos and information about the property, check the listing. 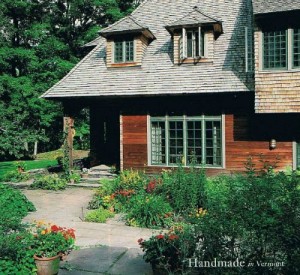 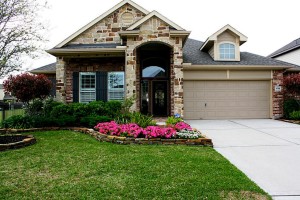