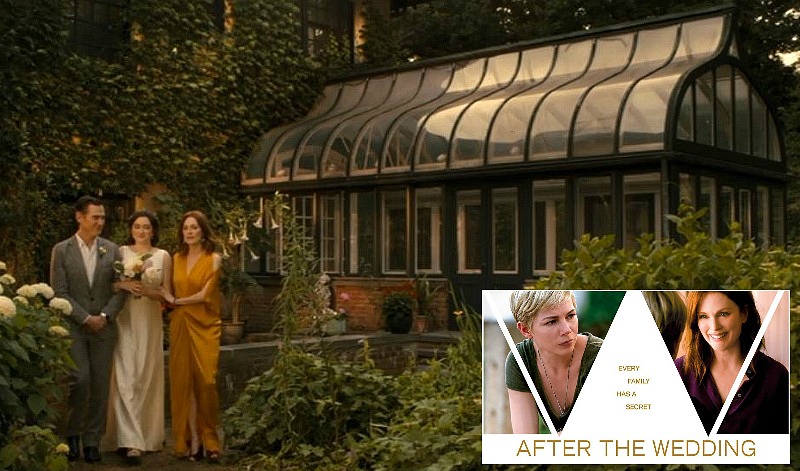 The historic waterfront estate known as “Frog Songs,” which was the filming location for the 2019 movie After the Wedding, is on the market. The 5.6-acre property on Centre Island in New York overlooks the Oyster Bay Harbor.

Julianne Moore and Billy Crudup played the couple who lived in this beautiful, ivy-covered home and hosted their daughter’s wedding in the backyard. They not only filmed the exteriors here but used the real interiors, as well.

The stately, 20-room house was built in 1908 by architect Clinton MacKenzie, and it was one of the stars of the movie. 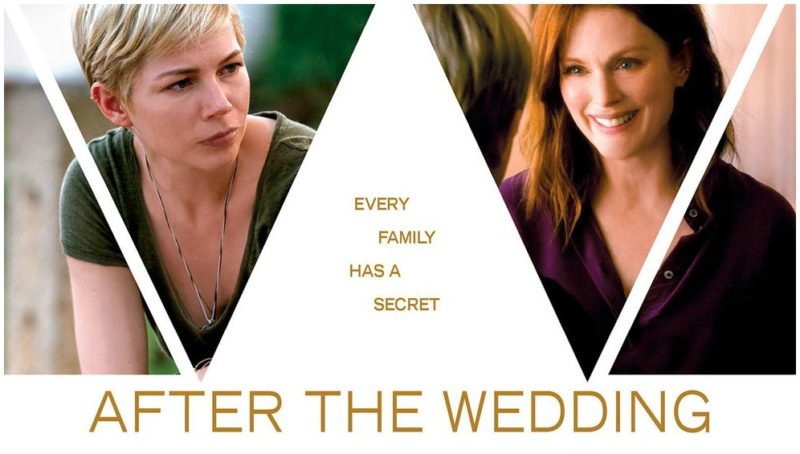 In After the Wedding, Julianne Moore played Theresa Young, a wealthy American who offers to make a sizable donation to an orphanage in Kolkata, India.

There’s a catch, though: she wants Isabel, the woman who runs it, to come to New York first, without telling her the real reason why.

When Isabel (Michelle Williams) arrives, she’s invited to the wedding of Theresa and Oscar’s daughter (Abby Quinn). During the ceremony, she’s shocked to realize she knows the father of the bride (Crudup), and complications ensue. 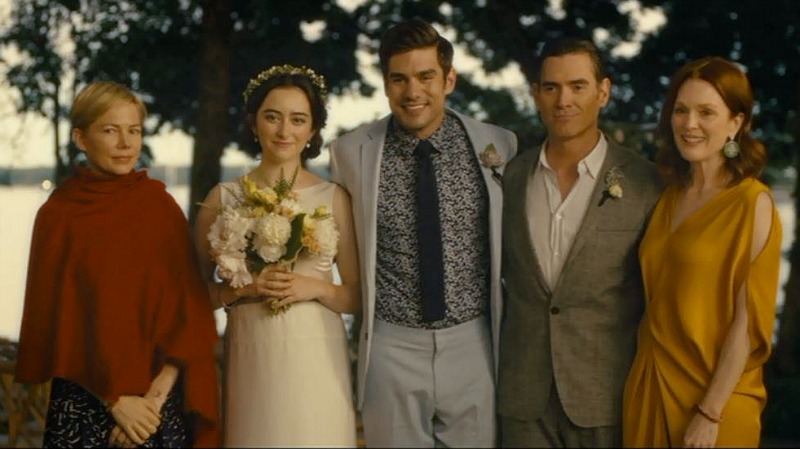 Julianne Moore’s House in “After the Wedding” 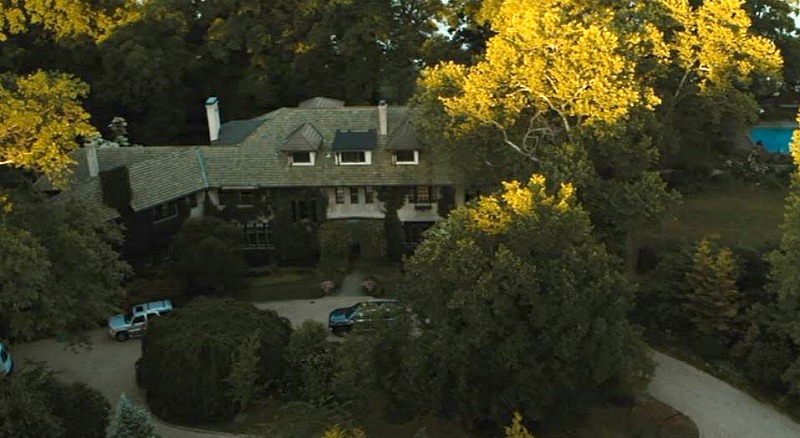 Because they filmed on location inside the real house, the interiors

look much the same in the listing as they did onscreen. 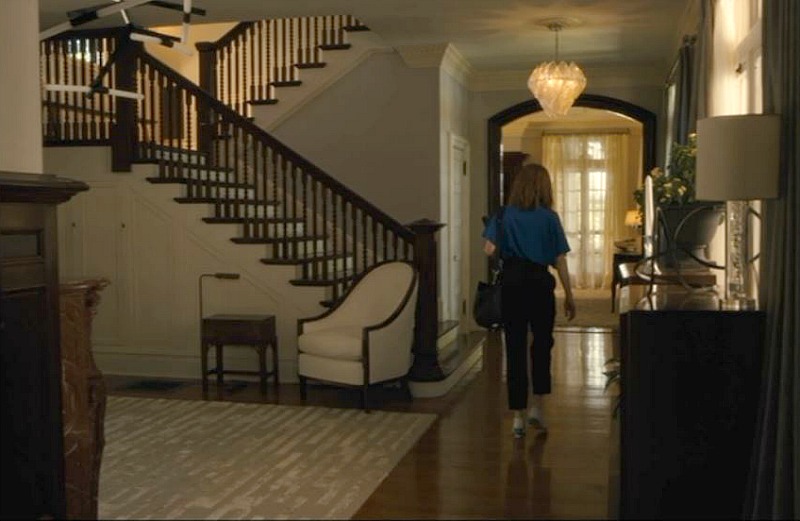 One notable exception is the kitchen. As you can see below, there is no tile on the walls.

That’s because it’s really a dining room. The actual kitchen is in a different part of the house.

You can see how it looks as a dining room, with the same chandelier, here.

The listing explains the estate’s history:

If you are looking for a home where you could live “happily ever after”, this enchanting 5.6-acre estate on bucolic Centre Island has a story to tell, one of romance and love that lasted a lifetime. It started with J. Clinton Mackenzie, an architect, who built his own dream home in 1908 on the island overlooking the confluence of Oyster Bay and Cold Spring harbors.

An acquaintance fell in love with his summer estate and asked Clinton to build him a similar home. And he did – next door. Both homes were different but alike in their Spanish Renaissance style, but in keeping with the nautical locale, Clinton’s house had a red tile roof, and his client, Henry Rusch, a banker, had a green tile roof. Henry and his wife loved “June Acres”, where they had a gentleman’s farm with cows, chickens, and many outbuildings including a carriage house and water tower. They lived there the rest of their lives.

Another man, Carter Bales (also in finance) and his wife, Suzy, discovered the Rusch estate, overgrown from standing untended for a few years, and fell in love with the style and spectacular location. Both being conservationists, they tackled the property with Suzy taking the lead. 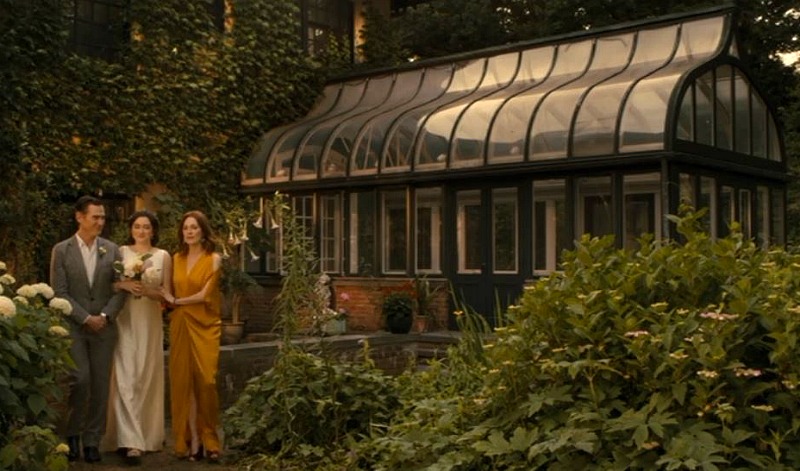 The listing agent continues: “In her quest to transform the land into something beautiful, Suzy Bales became an authority on gardening. With a Masters in literature, she started writing about what she learned, and as the years ensued, she not only transformed the property into a veritable Garden of Eden, she became a beloved author of 14 gardening books, wrote a column for the New York Times, and was a garden editor for Family Circle and Better Homes & Gardens.”

No wonder the property is so beautiful! It was the perfect setting for Grace’s wedding in the movie, with the gazebo and the water views in the background. 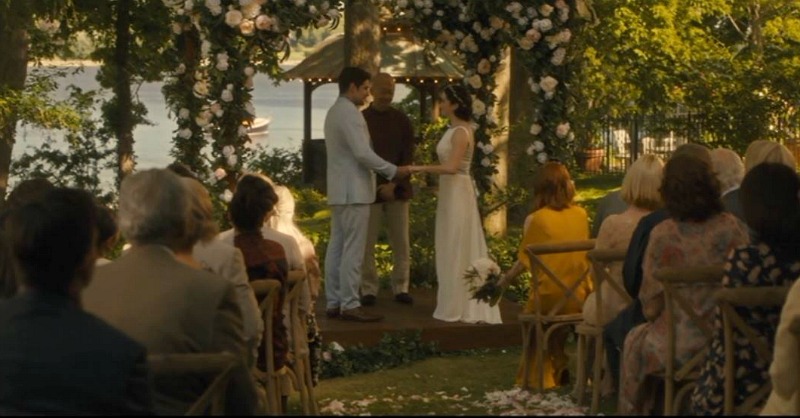 The gardens have been featured in tours and in print and include a vegetable garden, rose garden, espalier fence, a woodland stroll garden, perennial gardens, and a winter garden – all planted for four seasons of interest and with no chemicals or pesticides.

For added enjoyment, many water features were added such as ponds, streams, and fountains.

The Bales also transformed all those outbuildings into charming areas for entertaining including a four-bedroom carriage house, quaint guest cottage, potting shed and a fully appointed woodworking shop. 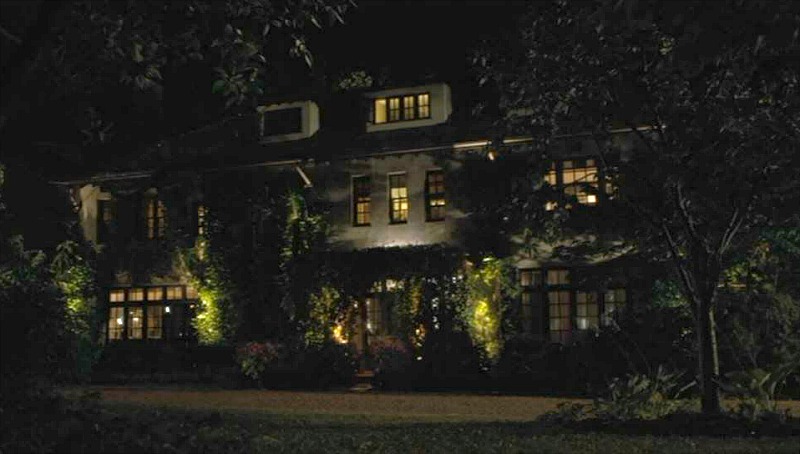 You can see how the house looked in 1910, shortly after it was built and before it was covered in ivy, here. Thanks to Stephanie for telling me about it. If you have a listing you think my readers would like to see, send it to me!

For photos and information about 407 Centre Island Road, check the listing.

Visit my Movie Houses page to see the others I’ve featured, listed A-Z,

including the mansion from Knives Out.

Previous Post
A Look Back at the House from “The Fresh Prince of Bel-Air”
Next Post
“Hocus Pocus:” The Witches’ House and Other Filming Locations