This 1913 Craftsman Bungalow in Seattle’s Ballard neighborhood is one of my favorite kinds of houses, so it made me happy to see how its owners restored it with beautiful period details. Thanks to some help from talented architect Tim Andersen, it’s come a long way since they bought it.

The architect says, “We fully restored in several phases this 1913 Craftsman house in Ballard neighborhood of Seattle. Many original features, like the balcony above entry, had been removed. Our restoration designs were appropriate for period and style, but not replicas.

“Decorative cut-outs in balcony railing for instance were not original, but enhanced Craftsman character. Inside, colonnade between living and dining rooms is a new feature. The kitchen was enlarged with a bump-out into backyard, and it’s roof became a second floor terrace.”

Keep scrolling to take a look at the before and after photos below.

The new exterior colors really give the formerly all-white house some personality.

The paint they used was Benjamin Moore “Mountain Lane” with “Barely Yellow” trim.

“Our restoration was true to period and style of house, but not always original design. For instance, we added a colonnade between living and dining rooms. Although a common feature of Craftsman houses, we found no evidence of one here.”

The buffet in the dining room is original to the house, but the doors were long gone. Craftsman James McKeown created leaded-glass replacements.

The owners discovered original box beams in the ceiling hidden behind newer drywall and removed it. They also added the arch above the bay window.

With the expanded kitchen, the house is now about 2,000 square feet with 3 bedrooms and 2.5 baths.

Andersen explains, “This was extent of kitchen prior to renovation,

sandwiched between a half bath and back porch with basement stair behind it.”

It’s hard to believe the transformation from that, above, to this, below:

I’m almost giddy about this kitchen. I love that they gave it some period-appropriate charm and detail it was missing before with a restored Wedgwood range, painted bead board (BM “Pale Sea Mist”), and custom cabinets, island and breakfast table in American Black Cherry.

Thanks to architect Tim Andersen for sharing this project with us.

Visit his profile on Houzz for more details. Photos by David Whelan. 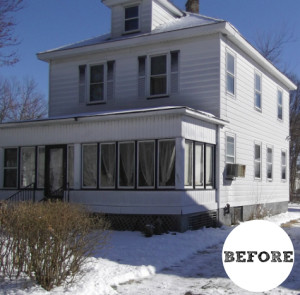