Talk about curb appeal — and needing some.

This 1905 bungalow in Atlanta had been neglected for so long that it was dragging the whole Grant Park neighborhood down with its droopy awnings and vinyl siding.

So Carl Mattison and Rob Smith, who live in the area, decided to do something about it.

The yellow address sign is something you’ll find on a lot of the houses in the area: “It’s an icon representing sun and sky and unity in our now brought-back-to-life neighborhood.”

Here’s how the porch looked before:

It had sustained a lot of water damage over the years. The awning dated back to the 1930s and had been painted over many times, so they removed it. It instantly made the front porch look more open — and a lot friendlier.

“It’s now a place where you talk to neighbors, visit and wave,” Mattison says.

They removed the vinyl siding that had been covering the original wood clapboard since the 1980s and were able to salvage the original beadboard that was hiding underneath layers on the ceiling.

The front door is from a salvage yard and cost about $150 to patch and paint it (Sherwin-Williams “Hazel“).

Until they came along, the house had been neglected for decades. According to Houzz:

The bathroom was unusable. The kitchen didn’t have any working appliances. The original hardwood floors had been painted over or covered with linoleum, and 1970s wood paneling covered the original plaster and lath walls.

Mattison and Smith thought it deserved better. After scooping up the home for $175,000, they shelled out another $205,000 to beautifully restore it, transforming a neighborhood eyesore into one of the jewels of the street.

Thanks to Carl Mattison and Rob Smith for letting me share their project with you.

Read the Houzz article by Mitchell Parker for more information and photos. 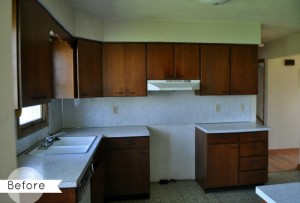