Over the past year I’ve probably gotten more requests from readers to see photos of Kourtney Kardashian’s house than any other celebrity’s, and it just hit the market in Calabasas.

Redfin reports: “She and Scott Disick purchased the four bedroom, five bath home in 2010 for $1.7 million. It’s located in The Oaks area of Calabasas, a little over a mile away from Justin Bieber’s house where the Biebs was recently accused of egging his neighbor’s home.” (Anyone else thinking that might be one of the reasons she’s moving? 😉 )

Scott Disick describes the home that he and Kourtney Kardashian share with their kids Mason and Penelope as “Alice in Wonderland meets Beetlejuice.” I can see that, can’t you?

Kourtney just finished decorating it with designer Jeff Andrews last fall: “It was definitely a collaboration between Jeff and I. I am really hands-on and really a perfectionist — especially when it comes to interior design — so I was 100% involved.”

Kourtney told Domaine, “When we first started decorating, I wanted all white walls and for everything to be really simple. Then I started saying, ‘I’m too young. This is my first house: I want to have fun!”

For more photos and information about 25435 Prado De Las Peras: the listing and

InStyle to see the rest of the photos by Grey Crawford.

The “Keeping Up with the Kardashians” House

BTW, the mansion where the most recent season of Keeping Up with the Kardashians on E!

was filmed is also on the market for $6.25 million.

As TMZ reveals, the K family didn’t really live in the Los Angeles seven-bedroom, eight-bathroom estate. In fact, they actually live 20 miles from the home that was the façade for their TV home. TMZ reports that Kris Jenner didn’t want to  show the outside of their real home for security reasons. When the show first got started, it was shot in the family’s real home. That property was sold in April 2011 for $2.8 million. 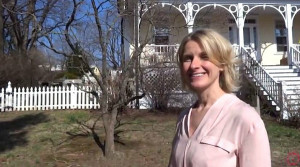 Next Post
Elizabeth Gilbert Is Selling Her “Beautiful, Perfect House”