Not only does Jennifer Lopez have a new job as a judge on “American Idol” — she’s got a new house in California, too. She worked with designer Michelle Workman to update it and the results were  featured in Veranda magazine.

“Jennifer and I wanted elegance, but we didn’t want it to look stuffy or conservative or serious,” says Workman. “We wanted it to be graceful, with just enough sparkle.”

The kitchen is probably my favorite room of the house. I love the gray-blue cabinets:

Maybe that’s why I like it. I’ve always wanted to live in a black-and-white ’40s movie (with Cary Grant as my love interest, please).

Workman says she had almost finished decorating the house in a château-inspired style when her famous client changed her mind and decided to go in a different direction.

“Jennifer wanted to go modern and streamlined but retain the sophistication and stylishness,” says Workman. She didn’t want to be locked into a classically French look.

Read the story in the February issue of Veranda. 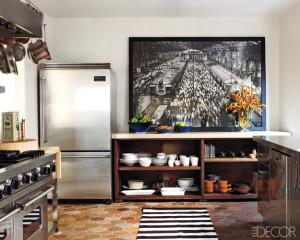